Getting metaphysical with the first-time director of Violent means dipping a big toe into the cold, dark waters of existentialism and cozying up with Kierkegaard

(October 19, 2016) VANCOUVER – A gentle drizzle falls outside, and the faint smell of woolly dampness mingles with the scent of fresh pie. It’s a typical fall day in Vancouver — wet, dark, and cool — the perfect backdrop for an interview with Andrew Huculiak.

Huculiak is the director behind Violent, easily one of the best first features in Canadian film history, but up until now, it was also one of the most difficult to access.

Shot two years ago in Norway with a unilingual Norwegian cast, Violent was invited to Cannes, picked up top prizes at The Vancouver International Film Festival and was shortlisted as Canada’s best foreign film Oscar submission. By all accounts and measures, it should have hit theatres nationwide.

Yet, it’s only now, two years later that Violent is receiving the theatrical run it so rightly deserves. A handful of local industry professionals put their talent and resources together to get Violent into Vancouver’s Cineplex International Village this week with hopes of going wider over the fall.

“Nobody wanted to touch Violent,” says Huculiak. “We didn’t have distribution. It wasn’t for lack of trying. We tried really hard. But they said ‘Norwegian?’ You’re not able to get your CAVCO numbers because you don’t have any Canadian actors.”

Nobody wanted to touch Violent…

Typically, Canadian distributors can access public funds to underwrite the release of a Canadian film, providing it meets the requirements of the Canadian Audio-Visual Certification Office (CAVCO) regarding Canadian talent participation.

Violent was shot entirely in Norway using Norwegian actors, forcing it to the fringes of the Canadian film landscape. Fortunately, that’s where Huculiak feels most comfortable.

“I do like to operate on the outside,” says the 27-year-old who speaks no Norwegian whatsoever.

“We went to Norway without speaking Norwegian. We were there for one month. The first two weeks were casting, scouting and rehearsals. Then we shot for 13 days.”

Even for a low-budget independent film, it’s an incredible feat, but Huculiak sees it more as a creative and spiritual victory more than a logistical triumph. 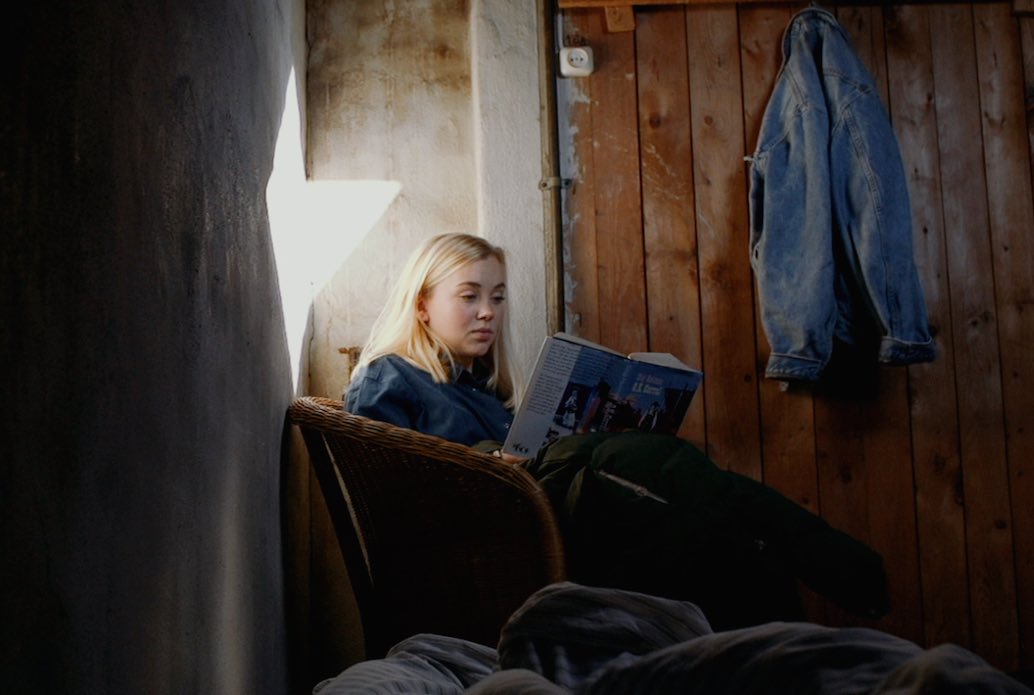 “It’s interesting how it all came together,” says the writer, director and member of the musical group We Are the City.

“Violent the film was written at the same time as the band We are the City was making Violent, the album, which is a rock album. It’s not a soundtrack, but we used themes, lyrical themes from the album, in the movie,” he says.

He also says the surreal shots of vibrating water patterns were created by placing water on a speaker while Violent the album was playing.

“I think both the album and the movie are coming from the exact same headspace and starting point. We were two years out of high school, and we’d moved from our hometown to Vancouver,” says Huculiak, who grew up in Kelowna within a traditional Christian environment.

Despite the suggestion of the title, Violent isn’t a ‘violent’ movie in any traditional sense. There is no hacking of limbs or blood splatter. There is no forensic examination of corpses or axe-wielding murderer.

The narrative follows Dagny (Dagny Backer Johsen), a young woman who moves from her little village to a larger town nearby. The film features long static shots of industrial areas, natural landscapes and water – dripping, splashing, rippling – in every corner of the frame.

“The writing came from discussions we had as a group,” says Huculiak, who was also reading the complete works of Soren Kierkegaard. “The dialogue was influenced by Paul Thomas Anderson. We also watched a lot of Scandinavian films. It was like once we decided it was Norway, we watched a lot of Scandinavian films and it turns out they are incredible. They’re dark comedy, slow beats, landscape shots.”

Yet, there was an even bigger influence behind the film, according to Huculiak. And it was entirely coincidental.

“One of the craziest things happened right before we got to Norway. Two weeks before we arrived, the woman we were supposed to stay with, her lover committed suicide. We told her we would find another place to stay (even though we didn’t have any other place to stay) but she said she thought it would be good for her to have us around,” says Huculiak.

We talked about life and death. We talked about meaning. And all those talks became part of the film process. It was intense and visceral for all of us…

You can feel the myriad layers of inspiration in the film, and it tugs at your subconscious, beckoning the viewer to immerse herself in a truly liquid reality, and perhaps approach the hidden, the sublime, the divine.

“I ask myself big questions all the time,” says Huculiak, who took a step away from a more Evangelical angle of Christianity to look inward.

“In the opening scene, Dagny is seeking god. Yet, she hears nothing. Is the nothing symbolic of nothing, or is it something else? Is it something greater? Silence. It’s nothing we can really interpret yet it’s powerful. It still speaks.”

In so many ways, the film is an existential meditation because it examines the individual as lone being, but forever in contact, and forever defined, by those around us.

“The film takes place in a surreal place because Dagny is alone. We are all alone, and alone at the most important moments. We are alone in our minds. And that’s when death becomes scary. But it’s also liberating. It happensto all of us, and when you embrace it, I think everything becomes a little clearer,” he says.

“We all do things that we don’t need to do – that add nothing to our lives. Like, I am not making memories when I look at my smartphone, but I do it all the time. It’s empty time.”

Huculiak has no desire to contribute to the junk and clutter of the everyday.

“I have massive self-doubt, but I think it’s important to harness those feelings in order to create an experience for myself. And that’s what I care about. I don’t care about making lots of money. In fact I hope I never make too much. It’s scary and addictive. I want to make movies that feel right. I don’t worry about whether people will like it or not, because then it wouldn’t be honest. There’s so much noise out there. I don’t want to add to it.”

No Replies to "Life, death and Andrew Huculiak"