Ruben Fleischer’s movie about supervillain Venom fails to sink its fangs into genre, leaving Tom Hardy to wrestle a dark alien force that’s colonized his DNA. It’s a perfect metaphor for the times, but can filmmakers capitalize on the moment when they’re working in the Marvel universe?

Venom isn’t a household name. He doesn’t rank among the pantheon of classic superheroes alongside Wonder Woman and Superman, but he’s got a cult following all his own because Venom is an arch-villain. He’s the flip side of the upstanding citizen and do-gooder, which means it’s a bit of a surprise to see him get the “hero treatment” as the title character in a major Marvel movie.

Then again, celebrating the sinister has become something of a national pastime of late. In fact, Venom could be the epithet for the state of politics, and his very image — an oily blob with giant teeth — could be its perfect mascot.

No wonder there’s a dark sense of delight in watching Tom Hardy gnash his way through the power elite as Eddie Brock, a journalist who violated a personal trust to get the story, and ends up paying the karmic debt. Not only does he lose his girlfriend and fiancee, Michelle Williams, he’s “infected by a parasite.”

He’s actually inhabited by an alien symbiotic creature that melds with his DNA and allows it to possess extra-terrestrial traits. Or something like that. At one point, Venom was more of a costume than a character — first appearing as a backup outfit for Spider-Man in 1982, a self-repairing, sentient organism that coated Spider-Man’s body.

Venom could be the epithet for the state of politics, and his very image — an oily blob with giant teeth — could be its perfect mascot…

Then, he became Spider-Man’s nemesis — an externalized dark force, first embodied by Topher Grace on-screen in Sam Raimi’s Spider-Man 3. Don’t worry if you’re not familiar with the Marvel-verse. The good news is Venom works just fine as a standalone movie, whether you’ve watched none or every Marvel outing that’s come before.

The key is Hardy, perhaps the best actor in the world*, who proves once more that he’s completely accessible — and more importantly empathetic — even when he’s sliding down the snakes of life. There’s a recognition of the game in everything he does, so taking on the role of Eddie — a hustling investigative reporter looking to climb the ladder and win the big scoop — plays to Hardy’s natural strengths. 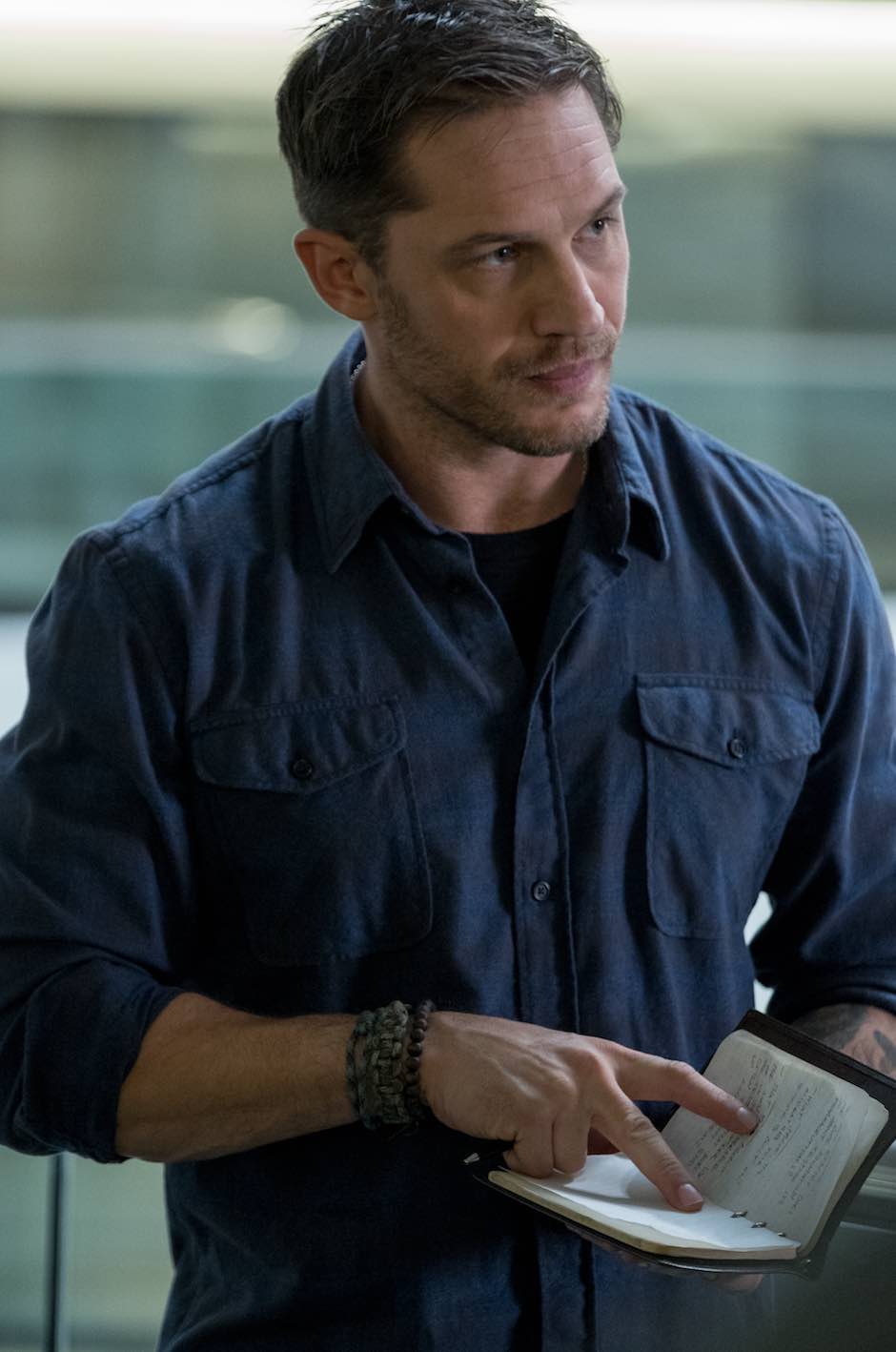 Party Hardy: Tom Hardy can make anything sexy, even playing an oily journalist who turns into a monster blob.

His physicality stretches across the frame. It’s not tied up in muscular knots, hulking and awkward. His limbs dance around with muscular elegance and spasmodic thrusts, forever reaching into the empty space and giving it form. His performances are so solid, things seem to  crystallize around him — which is good news for director Ruben Fleischer, the man who brought you Zombieland.

Fleischer could focus on the cameras and effects, leaving Hardy to handle Eddie Brock and his symbiotic alter-ego, Venom. The two have a great chemistry, which means just about everyone else in the movie is forgettable, even love interest Michelle Williams and bad guy in a tailored suit Riz Ahmed. This is a Hardy and Hardy two-hander, and that’s the best part.

The script’s jokes feel a little hammy and the storyline is, well, the stuff of comic books. The movie doesn’t really capitalize on the inherent novelty of a villain in the title role. Instead, it tries to justify it by pushing Eddie into forced, heroic scenarios, and affirming an old model. It’s where you can feel the conflict in the movie itself as it hesitates with what it’s trying to be — and what it’s afraid to become. Like Eddie, our hero-villain, the film feels a need to resist a new shape, a new manifestation of a changing inner core.

This is a Hardy and Hardy two-hander, and that’s the best part.

For fans of superheroes and Marvel movies, Venom will feel familiar in structure and tone — a freakish accident grants a mortal superpowers — but it may also land a little outside the known universe, given the lack of other franchise characters in the mix (outside of a Stan Lee cameo).

Whether this is the result of studio rights and Sony’s limited access, or a decision to keep this one unto itself doesn’t really matter. The movie ultimately rests on Hardy’s shoulders. He has to carry two competing characters through every scene in a single performance, one that captures the weight of potential evil as well as a soaring capacity for love. Not only is he up to the challenge, he gets free licence to chew every piece of scenery, and sometimes every head, around him.

Hardy understood the Monty Python tone the movie needed. It’s the same one Ryan Reynolds found for Deadpool to justify the gore: “It’s just a flesh wound.” Without the words on the page, Hardy uses his body to find the humour. It works, but even with all the lavish effects you can feel gaps in the story, and broken springs in the gears of character.

Venom is the embodiment of the disruptive force — an alien presence that infects our moral core and turns everything dark and ugly. This movie could have been a brilliantly dark satire of our modern age, which, let’s face it, is hard to satire. But the oily black blob with sharp teeth and a voracious hunger seemed like one vehicle that could have taken us to a much-need punchline.

Venom is the embodiment of the disruptive force — an alien presence that infects our moral core and turns everything dark and ugly.

Alas, we’ll have to wait. This is just the beginning of a whole new franchise where the central character is the central conflict. Eddie and Venom have to find a way to live together. Or suffer together. Like I said, it’s the perfect metaphor for the body politic — a dark ooze covering our natural identity, and filling us with evil forces. Too bad the filmmakers turned to formula instead of raising the flag for a new anti-hero, and his battle to salvage his human, journalist soul.

Ruben Fleischer’s movie about supervillain Venom fails to sink its fangs into genre, leaving Tom Hardy to wrestle a dark alien force that’s colonized his DNA. It’s a perfect metaphor for the times, but can filmmakers capitalize on the moment when they’re working in the Marvel universe? Not so far, says Katherine Monk.

No Replies to "Venom pits Tom Hardy against an oily Zeitgeist"