The March for Our Lives is a mission millennials have been training for their whole lives. Just look at the last 20 years of young adult fiction, says movie critic Katherine Monk. Whether it’s Harry Potter fighting the Ministry of Magic or Katniss Everdeen overthrowing President Snow, the next generation grew up with deeply moral role models who courageously confronted power.

“If desperate times call for desperate measures, then I am free to act as desperately as I wish.”

They are expecting under half a million, but by the time the last bus empties onto the mall in D.C. Saturday morning, there’s a good chance “The March for Our Lives” to end gun violence will rival the numbers of the Million Man March in 1995, and the 1963 protest led by Martin Luther King Jr.

Commentators on the Right will credit hacks from the Democrats for making it all possible, but in their desire to discredit the whole movement, they are missing the obvious: These kids have been training for this mission their whole lives.

The last 20 years of popular culture has crafted a unique generation of warriors. Beginning with the rise of Harry Potter at the turn of the millennium, and continuing through the decade with the entry of Katniss Everdeen’s battle to win the Hunger Games and Tris Prior’s Divergent ideas, the seeds of subversion were sown early. And unlike previous generations who resisted their parents to find their own truth, millennials have been trained to distrust the entire status quo.

The bulk of their storytelling — whether it be narrative film and fiction, comic books and graphic novels, video games or documentary film — is unified in its overriding message: The people in power are lying to you. Trust no one, except the peer willing to risk her life for yours. This is a war that will change the face of the future. 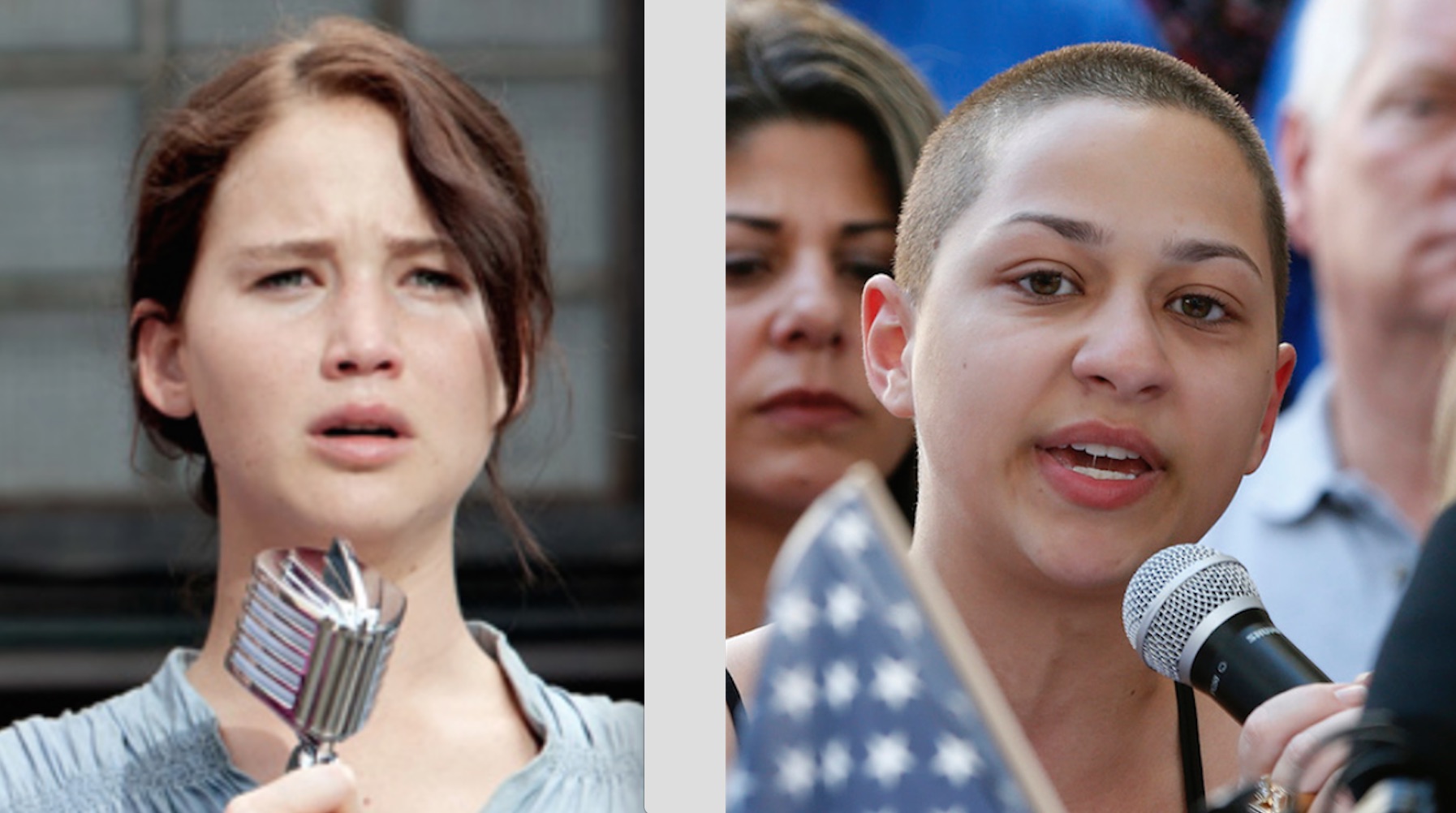 Speaking truth to power: Katniss Everdeen, the heroine of The Hunger Games, and Emma Gonzalez, a student from Marjory Stoneman Douglas and a role model for the masses.

The theme of youth rebellion isn’t entirely new. It seems to regenerate in the wake of war, as one generation is put in the ground prematurely, and another is forced to live with the guilt. Shortly after the Second World War, two important works about the power of young people entered the world: William Golding’s Lord of the Flies and C.S. Lewis’s Chronicles of Narnia.

The last 20 years of popular culture has crafted a unique generation of warriors. Beginning with the rise of Harry Potter at the turn of the millennium, and continuing through the decade with the entry of Katniss Everdeen’s battle to win the Hunger Games and Tris Prior’s Divergent ideas, the seeds of subversion were sown early.

The former showed how children could be worse than adults, little more than unchecked ids runnings around an island unchaperoned, finally turning into a cannibalistic mob. Lewis’s series was much different, showing how the kids had to save Narnia from 100 years of winter by becoming warriors against the White Witch.

Interestingly, literary critics of the day didn’t have much time for The Lion, the Witch and the Wardrobe. Lewis’s publisher thought the book would ruin his reputation. Yet, once the book found itself in the hands of young people, it took off — proving young people wanted young heroes, and the grown-up world that waged constant war didn’t always have the right answers.

“You are all about to be tested…” – The Chronicles of Narnia, The Voyage of the Dawn Treader: C.S. Lewis’s stories about a magical kingdom accessible through a wardrobe featured a group of children sent to the country to escape the war, only to end up fighting the White Witch to end 100 years of winter.

The only recent parallels, as far as the depth of the generational divide is concerned, can be seen in the student protests of the 1960s. Kent State, the uprising at the Sorbonne, the endless sit-ins — they were all spurred by the war in Vietnam. They wanted the war to end, but in doing so, they had to challenge the grown-up group think on geopolitics.

The movements were everywhere, but they lacked cohesion and focus. There was a psychedelic inflected rhetoric that baffled and alienated older folk who felt threatened by the looming revolution that had no distinct form, and no message except the utopian obvious: “Make love not war.”

The flower children weren’t entirely ready for a wholesale recreation of the known universe. These were kids weaned on the optimistic idealism of The Andy Griffith Show and Leave it to Beaver. Their disillusionment came out in tie-dyed rage and rallies, as resistance without a well-formed solution. It’s why the likes of leathered Congressmen are desperate to see the kids from Stoneman Douglas as new-fangled hippies: That way they can be written off as a counter-culture fad and an extension of the known Left.

Yet, this new generation isn’t anything like their freak-flag-flying forefathers. They didn’t grow up expecting the Disney dream of happiness in the suburbs. They’ve been saturated by dystopian fantasy, and forced to watch their peers slaughtered — literally — before their eyes.

Where the sixties kids got to enjoy the garden ideal without questioning its resilience, millennials realize they’ve been purged from Eden and handed a broken toy. And like all the young adult heroes they’ve grown up with, they realize it’s their responsibility to change things. They will have to take matters into their own hands.

“It’s time to end this….” Harry Potter and the Deathly Hallows: JK Rowling’s phenomenon focused on a young wizard who must challenge the mortal world, and the supernatural one, in order to save humanity from evil. Only by unifying the students of Hogwarts will he be able to defeat the Ministry of Magic, and all the other adults under the spell of the evil Voldemort.

According to Emma Gonzalez, one of the teen activists organizing “The March for Our Lives,” the movement began immediately after the Parkland shooting took place. One student said he wasn’t going to be satisfied with the status quo. “There was this moment where we knew how it was going to turn out,” said Gonzales in a recent interview on the Rachel Maddow Show.

“We know the politicians will say thoughts and prayers, they are going to say those words, and that’s all they are going do and that’s not what we want to happen. We want this to stop. It’s time to break the pattern.The definition of insanity is doing the same things over and over again and expecting a different result.”

The words echo those of Katniss and Tris and Harry and Thomas — or just about any modern YA hero — who fought corrupt, adult power to save the world.

“What if we were sent here for a reason.” – Maze Runner: The story of Thomas, a teenager thrust into a giant prison enclosed by a giant maze built by grown-ups. Thomas must unite his peers to escape, because it turns out those with all the power see his generation as little more than guinea pigs.

For instance, in Catching Fire, Katniss recognizes the words of President Snow (Donald Sutherland) may be entirely empty. “I’m taken aback by the directness and even the sincerity of this speech. As if his primary concern is the welfare of the citizens of Panem, when nothing could be further from the truth.”

Suzanne Collins’s young heroine never wanted to be a saviour. She simply acted to save her little sister, Primrose, in a reflexive moment of altruism. Once again, the words of the young student activists could just as easily have come from the residents of District 12.

“We all have hope because we’ve seen it from kids younger than us also,” said Stoneman Douglas activist Jaclyn Corin. “And I think our generation is going to be the change because we’ve grown up with this. And we’re not going to let the future generations grow up with it also.”

“I think these these games are going to be different…” – The Hunger Games, Catching Fire: Suzanne Collins’s story featured a young Christlike figure named Katniss Everdeen. Recruited into a slaughter designed as entertainment, Katniss ends up leading a rebellion against the morally frozen President Snow.

Once again, we can turn to Katniss for inspirational thoughts in the same vein: “I begin to fully understand the lengths to which people have gone to protect me. What I mean to the rebels. My ongoing struggle against the Capitol, which has so often felt like a solitary journey, has not been undertaken alone. I have had thousands upon thousands of people from the districts at my side. I was their Mockingjay long before I accepted the role.”

“I have had thousands upon thousands of people from the districts at my side.”

No wonder these young men and women look so composed and articulate before the cameras. Not only are they social media and Instagram filter savvy, they’ve watched Katniss, Harry, Tris and countless Maze Runners do the same thing: Take responsibility for the mistakes of previous generations. They’re reluctant and maybe even a little resentful of the weight thrust on their young shoulders, but moral outrage compels them.

“Trust No One…” – Divergent – Tris Prior doesn’t fit into any traditional faction which makes her threatening to the status quo. She is divergent, but her difference will prove to be her strength, and humanity’s best chance at salvation.

Says activist Sarah Chadwick: “We have all this pressure on our shoulders to make this change. And we’re only teenagers, and we shouldn’t have to be the ones who have to make this change. It should be the politicians who are in power right now. But unfortunately, it has fallen onto our shoulders, but now that it has, we have that responsibility and we will make sure we get it done.”

So take one last look around you at the world you know, because come Saturday morning, the next generation will be battle ready and emboldened as they declare a war on guns, the National Rifle Association and the corrupt politicians who are willing to sacrifice teenage lives for a mahogany desk and a sliver of power.

To quote Collins’s Hunger Games one last time: “Stupid people are dangerous.” The kids from Marjory Stoneman Douglas know that. It’s why their collective intelligence, articulate arguments and courage in the face of criticism are so inspiring and so powerful. They have given the rest of us hope, and so, with a whistle, we all say:  “May the odds ever be in your favour.”