Not Pretty Enough: The Unlikely Triumph of Helen Gurley Brown 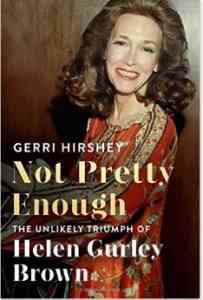 Judging herself by her own cover, Helen Gurley Brown never thought she was pretty enough.

Oct. 17, 2016 – Gerri Hirshey’s Not Pretty Enough: The Unlikely Triumph of Helen Gurley Brown (Sarah Crichton Books, $38) is a penetrating biography of the “mouseburger” — HGB-ese for plain Jane —who endured a miserable childhood in small-town Arkansas, fought her way up the ladder at a Los Angeles advertising agency, then wrote Sex and the Single Girl. The book sold two-million copies in 1962 and was brave enough to start the conversation about women’s sexuality.

She took over Cosmo in 1965, never having worked at a magazine. After her first day, her husband found her lying in the fetal position under his desk. But HGB learned fast. She glammed up the magazine, cut story length and added sexual friskiness to the articles. By 1972, monthly ad revenues had risen from $57,000 to $432,000. During her tenure, Cosmo became the top-selling young-women’s magazine in the world with 64 international editions in 35 languages.

In the spirit of Cosmo’s cheeky cover lines — “Five things that drive him wild!”— here’s a glancing look at what made HGB run.

The number of lovers HGB claims to have had before marrying David Brown, the Hollywood producer behind Jaws and The Sting. She had several extra-marital affairs as well. But Helen was always up for a little hubby action. “I had sex last night,” her 2000 essay for Newsweek begins. “I’m 78 and my husband … is 83.”

Although Brown and HGB had a combined fortune of $150 million, she was a notorious skinflint. Helen took the bus (fare 50 cents) from her penthouse apartment in Manhattan to the office. When Joan Rivers, in a cab, spotted HGB struggling with overloaded work satchels at a bus stop, Rivers rolled down the cab window. “Helen, calm down and take a cab! Your husband made Jaws!”

On her nightstand, Hirshey reports, Helen kept a can of Crisco to rub into her surgical scars.

When HGB died in 2012, the New York Times couldn’t resist  a mean little cat scratch in the lede of its obituary. Brown was 90, the obit began, “but parts of her were much younger.” She got her nose done by the same doc who did Marilyn Monroe’s chin, and later added new cheekbones. Her husband, who loved her small booo-som, as Helen called it, was furious when she had breast implants at 73. She had so much plastic surgery, the joke goes, she left her body to Tupperware when she died.

David Brown, HGB’s husband, wrote Cosmo’s cover lines for more than 30 years. Some of his ripest:

How to make a small bosom amount to something

Things I’ll never do with a man again

The Bugaboo of Male Impotence

Why I wear false eyelashes to bed

Living together is a rotten idea

Why men loved sex with HGB

She learned “very early to be very good in bed,” Hirshey reports. One boyfriend who was a Hollywood agent coached her on how to talk dirty to her lovers. Helen’s return rate was high — most guys kept running back to her, skinny legs and all.

HGB on the joy of sex outside marriage

“Even in 1947, I knew it was okay to sleep with men and not be married to them … I was never a revolutionary. I was just reporting what was true for me, true for my girlfriends.’

Compared with HGB, Woody Allen is a well-adjusted guy who never had an anxious moment

HGB began psychotherapy at 22, when she could barely afford one appointment a month. She saw psychiatrists for more than 50 years.

Why she needed to unload to a shrink

HGB’s widowed mother Cleo harped on her daughter’s plainness. Cleo’s assessment “sunk in and never really left town,”  writes Hirshey. She was raised in the Depression in a family home filled with anxiety and worry. Throughout HGB’s life, “[F]ear would trail her like a slinking pariah dog.” Helen was a “master of sex and a prisoner of love” whose feelings of being rejected never left her. 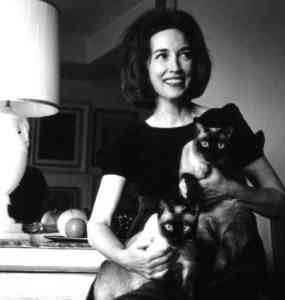 “Keep them as pets!” But make sure they pay for everything, she warned, and that includes replacing the booze they drank at her apartment.

A favourite “comfort food” meal the Browns often enjoyed at home. In restaurants, Helen would order a salad and eat the lettuce leaves with fingers.

1,200-1,500 calories per day. Breakfast: 90 minutes of exercise, followed by one-quarter of an envelope of Carnation Instant Breakfast. Lunch: 4 ounces of cottage cheese, half a pear, a 3-ounce daub of tuna salad. Dinner: 4 to 8 ounces of ”some kind of meat and a vegetable.”

Hirshey reports that Helen saw close girlfriends though abortions in the late 1950s and early 1960s. This involved harrowing trips to Mexico and a back room. The cost was $500 at a time when working women earned about $75 a week. She also helped girlfriends get over “the tremendous, wounding, sadness that followed the abortion.” Helen had plenty to say about women’s reproductive rights, relished her forum, and called for abortion laws to be overhauled.

HGB on Sex and the Single Girl

For Helen, unmarried sex was “a wonderful, delicious, exquisite thing.” Cosmo readers were like her little sisters whom she wanted to steer right. “I beg you not to settle.”

“I am not beautiful or even pretty. I once had the world’s worst case of acne. Grew up in small town, didn’t go to college. I am not bosomy or brilliant. … But I don’t think it’s a miracle I married my husband. For seventeen years I worked hard to become the kind of woman who might interest him.”

HGB’s place in the feminist pantheon, according to Barbara Walters

“What she did was make women feel that it wasn’t a crime to be single and have sex… She made women feel they could be sexual. This was an amazing contribution. It’s what made the magazine so popular. To Helen, it was wonderful to have a man. To women in the (feminist) movement, it wasn’t necessary to have a man, so Helen became not just silly, but detrimental.” 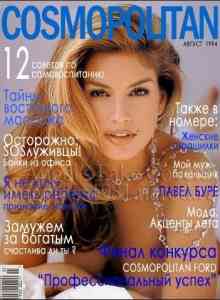 In 1994, Helen went to Moscow to launch a new edition of Cosmo. Not even the Politburo could resist HGB. The Moscow Cosmo — Cindy Crawford was on the first cover — was an instant hit, selling a million copies a month. (It didn’t hurt that the leading Russian magazine for women was titled Factory Worker Lady.)