In Norwegian with English Subtitles 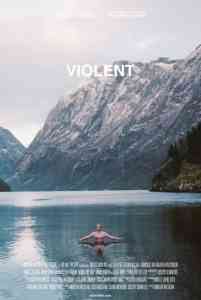 The words are part of a larger motif that draws you in and embraces you with a giant question mark because until the final moments, you’re not quite sure what, exactly, “feels like water.”

At times, you wonder if director and co-writer Andrew Huculiak is getting meta – given this impressive debut feature is an entirely immersive experience that has the emotional mass and tensile strength to keep you suspended in solution.

There’s no doubt Violent is a deep dive of a drama that leaves a chill, but it’s also a profoundly beautiful story that teeters on the edge of genius without even trying because it bypasses language and speaks straight to the soul.

Shot in Norway and scripted in Norwegian, Violent doesn’t pull from the North America’s cinematic gene pool, despite being written and directed by two Canadians, Andrew and Josh Huculiak.

The B.C. boys have a background in music, which means Violent is more dependent on running themes than actual plot points or particular scenes. The mechanics of the mise-en-scene lead to a mood more than a narrative structure.

In other words, you have to dive in – just like our central character Dagny (Dagny Backer Johnsen).

Opening in the midst of a fjord ringed by snow-capped mountains, we watch and listen as Dagny speaks to her little sister Astrid about what may or may not happen when she dunks her head beneath the frigid black surface.

Will she see god? Will she understand the meaning of her presence on Earth? Will she have the epiphany we all crave?

It’s the sort of self-baptism that young people tend to seek out on their continuing voyage away from the family nest, and like all fledglings, we worry about her survival as she faces the big winds of a hostile world.

Dagny wants to move to the bigger town nearby, but gaining access to the adult world can be dangerous, and we feel the threat every time she leaves her attic apartment. If it’s not the sketchy industrial area that stresses us out, it’s the awkward advances of her boss Bengt –a misfit who owns a hardware store.

Huculiak knows we’re prisoners of the worst expectations, and he amps it up by offering scenes of Bengt and Dagny in the deserted store. He shows us Bengt carrying garbage bags containing what appears to be wet clothes, buckets filled with cement and a tense moment when he offers her a ‘team T-shirt.’

The longer he keeps the camera rolling, the more uptight we get – but Huculiak doesn’t put us on the rack for the mere sake of generating stress and suspense.

He hones our consciousness to a point of extreme awareness then addresses it directly with hypnotic shots of vibrating water.

There is no obvious logic to the stream of images, yet it all feels undeniably natural – as though Huculiak were carrying on a conversation with a part of our brain that’s normally dormant. We sense the message, and it’s beautiful, even if it’s never truly articulated until the very end.

The gap in our understanding of the film’s unique reality is where we get tripped up. Like the little girl in Sam Peckinpah’s famous Band-Aid commercial, we tumble in slow motion, knee colliding with concrete, hands scraping pavement. We feel the violence of a changing physical state, but Huculiak suggests something even more terrifying with the title.

We wait for something awful to happen and ponder every awful possibility as they arise between the frames, lurking just off-camera, waiting to drown us at the bottom of a muddy pond like any other murder victim in mass entertainment.

And yet, the expected turn of events never fully manifests. It would be too easy, and too dull, to fulfill such base expectations with a bucket of blood and a murder weapon. Indeed, the movie smashes the single dimension of Hollywood meaning and creates a fluid kaleidoscope of human constructs that start to look strange, beautiful and oddly patterned as they pop up in rhythmic bursts.

Violent is more about fractals than fractured bones, and yet, it lives up to its title because Huculiak rips us away from our everyday world with the force of a tornado, turning each and every viewer into an airborne Dorothy for the duration.

We’re definitely not in Kansas anymore, or even Norway for that matter. Violent unlocks the revolving door of existence and lets us push in both directions. It can be a little confusing, but there’s satisfaction in the mental workout as well as a refreshing swim across the frigid fjord of human connection.

A moving and memorable piece of work, Violent is nothing short of a must-see.

Andrew Huculiak's debut feature is a stunning mediation on the meaning of life that owes as much to Alfred Hitchcock as it does to Terrence Malick in its bid to open our eyes to existence. -- Katherine Monk

No Replies to "Violent finds eerie beauty in the abyss"