Just the end of the world another soap on steroids

The latest effort from Canadian wunderkind Xavier Dolan plays to the auteur’s favourite themes: moms, gay sons and simmering family dramas that will not be denied – or else! 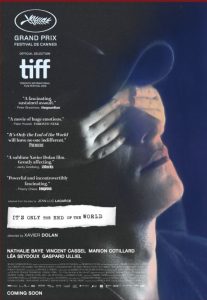 Even if you don’t like Xavier Dolan’s movies, you have to respect the Quebecois wunderkind for his passion, his unstoppable pluck and his uncanny ability to flay the human animal.

The 27-year-old actor, writer and director creates dramas that function like soap operas on steroids: incendiary indictments of human weakness, betrayals mired in brutal violence, and in the case of his latest, Juste la fin du monde, an end-of-life family saga that demands more from its viewer than it’s willing to give.

Louis (Gaspard Ulliel) is making his way home when we first meet him, sitting on an airplane, smiling at the little kid in the seat behind his, explaining his situation in dreamy voice-over.

Louis appears to be dying. He wants to see his family one more time. And he doesn’t have the nerve to speak the whole truth, lest he break his poor mother’s heart.

Based on Jean-Luc Lagarce’s stageplay, Juste la fin du monde is essentially an AIDS story, penned by one the disease’s many victims before his own demise in 1995. Dolan doesn’t go out of his way to paint the historical tableau or even establish the exact time frame.

As always, he dives headfirst into the deep end of the emotional pool and thrashes up a storm of cinematic bubbles featuring Ulliel as the somewhat inert Louis – a quiet and empathetic writer – and the effervescent Vincent Cassel, Nathalie Baye and Léa Seydoux as his volatile family members searching for a way to connect.

The result is a simmering cauldron of unresolved relationships. Louis and his big brother Antoine were close once, but a chill entered their space some time ago and they’re still trying to thaw. Louis and his little sister Suzanne (Seydoux) never really knew one another, and now that she’s an outgoing rebel, she longs for a moment of raw sibling connectedness with her prodigal brother.

The mother is only referred to as ‘la mère’ – which means Nathalie Baye isn’t just playing one mother, she’s playing the entire maternal archetype – with a Cleopatra haircut.

For Dolan, the kid who blasted into the stratosphere with his Cannes-winning debut, J’ai tué ma mere in 2009, stories of gay sons and their moms is familiar terrain. He knows how to tweak the specifics of the situation, finding the unsettling Freudian moments that hint at truths we are too afraid to approach.

Dolan stares into the eyes of each character long enough to make us conscious of something they are trying to hide, whether it’s unspoken love or simmering hate. He knows what people are trying to secret says more about their true identity than what they are trying to show, and that’s why his films are often as annoying as they are enlightening and inspirational.

He gets people. And he shows us people, often using tight close-ups and long takes, Dolan’s style adds up to psychological ultrasound. Every hostile exchange between the characters sends a pulse through emotional fibers, and gradually, we begin to form an image from the murky data.

It’s fragmented and frequently hyperbolic, and without the tempering forces of age and internal doubt, Dolan’s work still carries a whiff of youthful conviction – a sense of stylistic assertiveness and integrity that could be taken as arrogance. Buy lipitor online

I can see what people are referring to when they say his work is precious, schmaltzy, pompous and self-conscious. He makes no effort to pander or conform, but really, why should he? The movies he makes function on a universal level because they address emotions first. Buy valtrex online

We may not know what is happening half the time in Juste la fin du monde, but knowing doesn’t matter in Dolan’s world. Feeling does. And this outing, recently named Canada’s Oscar contender for best foreign language film, will make you feel something. It may be the ache in Louis’ fading soul for all the moments lost to time, or an edgy fidget, wondering how many more layers of family drama we’ll have to drill through before hitting cathartic pay dirt. Buy fluoxetine online

If you’re wrestling with the latter, surrender early because Dolan doesn’t really do catharsis. He’ll create the scenario, enlist the characters and throw you in the middle of a family shit-show. His talent is creating the mood and installing an internal hook, the rest is entirely up to the viewer – and whether you’re willing to be reeled in, or simply irritated by the bait and the barb.

Say what you will about Canada's cinematic wunderkind, but Xavier Dolan does it again with Juste la fin du monde, a tense emotional voyage that successfully strips the human condition down to the bone. Based on a Jean-Luc Lagarce stage play from the 1990s, this new film deals with a prodigal son's return home before his imminent death. It's over the top in places, but that's what Dolan does so well: He spins the dramatic centrifuge so quickly, he separates feelings from the soft tissue, where it often looks grotesque and out of proportion. But stays real. -- Katherine Monk