Happy National Canadian Film Day! Yes. We Have One.

Once stunted by an icy carapace of quiet self-loathing and back-stabbing bickering, our love for Canadian cinema is beginning to blossom every spring with screenings across the country, and the world, in the budding celebration called National Canadian Film Day — which celebrates its fifth year today with more than 850 events and a focus on female filmmakers.

The Fifth Annual National Canadian Film Day is coming to a theatre or video screen near you.

VANCOUVER, April 18, 2018 – Sharon Corder says the inciting moment for National Canadian Film Day happened after a run of dinner parties among friends — all film industry veterans, and all part of Toronto’s core of professionals. “I’d ask ‘What’s your favourite Canadian movie?’ And someone would say, ‘Oh, they’re all shit.’ And I was like, hey, isn’t that what we all do for a living?”

Corder grew up in the United States. She wasn’t used to the reflexive self-loathing, nor was her partner, Jack Blum. “When I came to Canada, I fell in love with everything about the culture. The art, the cinema, the literature. But our friends hadn’t even seen a lot of the movies that I loved. Sure, some were bad, but great films have always been made here. People just have to see them.”

Corder knew people needed more access. But she had no ambitions of launching a national event, let alone an organization, until the 2003 election of then-Toronto mayor David Miller. The mayor wanted to meet with people in the industry to talk about the persistent problems, and Corder — who was working as a screenwriter and producer — was there with the rest of the Big Smoke’s vested pros.

“I just said some days I wish we could get our films out to young people and show them, because I believe they will really like them. And everybody went: Awwww,” says Corder, speaking from her office in Toronto. “Like everyone loved the idea. At the time, it was something truly off the top of my head, but later that evening, I talked to Jack.”

“When I came to Canada, I fell in love with everything about the culture…. But our friends hadn’t even seen a lot of the movies that I loved. Sure, some were bad, but great films have always been made here. People just have to see them.”

After conferencing with fellow professionals, they jumped in with both feet and created Reel Canada, a charitable non-profit that started bringing Canadian films to Canadian high school students just over 14 years ago. Corder is Artistic Director. Blum is Executive Director.

“At the beginning, I thought if 30 per cent of the kids that we show these movies to like them, how much further ahead we would be. That was such a low expectation. Such a huge percentage of them love the films,” she says.

Canadian Film Day is an extension of the high school program, as well the organization’s program for new Canadians. Now in its fifth year, Canadian Film Day is what Corder describes as “an opportunity for us as Canadians to take one day of the year, and enjoy the fact that we actually have a treasure trove of films out there that most of us don’t get a chance to see, or even realize that we could see. It’s an opportunity to expose everybody to the whole history of our filmmaking.”

Spotlight Film: Away From Her. Find a screening near you.

This year, the big day is April 18. But that can change year by year because National Canadian Film Day has to fall on a Wednesday in April. That’s what works best Cineplex, one of the event’s main sponsors, and essential exhibitors. The obvious choice of July 1st was also out, according to Corder, because the whole point is to get the films to kids in classrooms. This year, they’re even providing a live broadcast to students in Ontario from the atrium of the Front Street CBC headquarters featuring Don McKellar, Liane Balaban and Elan Mastai.

There’s also a focus on women. “It just seemed like the right time to feature the women filmmakers in Canada. So much good work to celebrate, and given everything that’s been happening in the industry, it was the right time to shine a light on these people.”

Corder is referring to people like Mina Shum, Ana Valine, Kathleen Hepburn, Deepa Mehta, Patricia Rozema, Ann Marie Fleming, Rachel Talalay, Ella Maija Tailfeathers and Anne Wheeler — all of whom are participating in this year’s programming in some way, shape or form.

Corder says she remains surprised by the success — which, she feels, makes her a true Canadian. “Last year, we had a special sesquicentennial grant and a good-size budget and we were able to do a massive day. That uncovered a huge amount of interest out there. That was a surprise for us. We know that in some quarters Canadian film can be a hard sell. We know that some people can be defensive about it,” she says.

“[That’s] the Canadian way. But there was a hunger in small towns and big cities and internationally… to see our movies. So it’s been really quite revelatory for us. This year, we really had to barge ahead because we were getting almost snippy emails from libraries in New Brunswick asking us about the dates.”

“Last year, we had a special sesquicentennial grant and a good-size budget and we were able to do a massive day. That uncovered a huge amount of interest out there. That was a surprise for us. We know that in some quarters Canadian film can be a hard sell…”

Though Reel Canada doesn’t arrange or program the particular events surrounding National Canadian Film Day, they’re still the resource nexus for programmers and educators around the country. “We coordinate and provide the actual films — usually on DVD — but it’s our partners across the community that actually program the movies. We just make sure they can get their hands on what they need. We also offer a digital party kit and other marketing tools.”

So far, events have been held in military bases, church basements and Canadian embassies, as well as schools, theatres and community centres across the country. “People want to see these movies. And they like them when they see them,” says Corder. From their humble beginnings five years ago supporting about 80 events, this year’s events add up to 850 screenings across the land, as well as streaming via the CBC and the National Film Board.

Spotlight Film: Ginger Snaps. Find a screening near you.

Yet, there’s still a disconnect between the good news in participation and access, and overall box-office success stories. Canadian films continue to struggle for box-office dollars and screen presence against their American, Asian and European rivals. Though Telefilm stopped publishing actual box-office share stats a few years ago, focusing on saturation and access data instead, the numbers for English-Canadian cinema remain where they’ve always been: Hovering under five per cent of total gross.

Corder says she doesn’t blame Telefilm for changing the metrics. “It was too discouraging for everyone.” The bottom line, she says, is that we just can’t compete with the big players. “They spend as much on PR for one Hollywood film as we do for an entire year of production, let alone PR…. So we have to do a grassroots thing.”

The infusion of Netflix’s $100-million into Canada’s production pool late last year will no doubt stir the pot. The US streaming service’s commitment adds a chunk of available funds to the current kitty, largely comprised of the Canadian Media Fund (CMF). The fund collects money from broadcasters and government, which in turn disburses the assets via the public administrator, Telefilm Canada. In the fiscal year 2016-17,  that amounted to $362.7 million. Out of that, the agency funded 88 features and 18 micro-budget features for about $70 million – with the rest going towards television, promotion, education and development. It’s a lot of screen hours for a relatively small investment, and with more alternative modes of distribution — such as streaming and VOD — there’s a better chance Canadians will be able to see what their fellow citizens have filmed.

Yet, how well are we really doing? Telefilm set a goal of 50 percent “awareness level” for its last fiscal (2016-17). The good news is it exceeded its target. According to the Annual Report: “In 2016-2017, results showed that 53% of Canadians surveyed reported being able to name a Canadian film—an 8% increase over the prior year.” At the grassroots level, things are improving: More than half the population of the nation can name at least one Canadian title — and yes, Room, Porky’s, A Christmas Story and anything by Denis Villeneuve count. The bad news is, almost half the people surveyed are still clueless on the subject of our national cinema.

But the “Awareness Index” doesn’t tell the whole story. Another new metric, and one that supplants the old box-office scores, is the “Success Index.” This new number includes box-office, but isn’t calculated in dollars. Revenue and share are weighed in with other factors, including festival presence and honours, as well as the amount of outside investment in the industry itself. The result is a “success score” — and even on that one, which has no scale or comparable values — we’ve gone from 96 to 89 from 2012 to 2016. 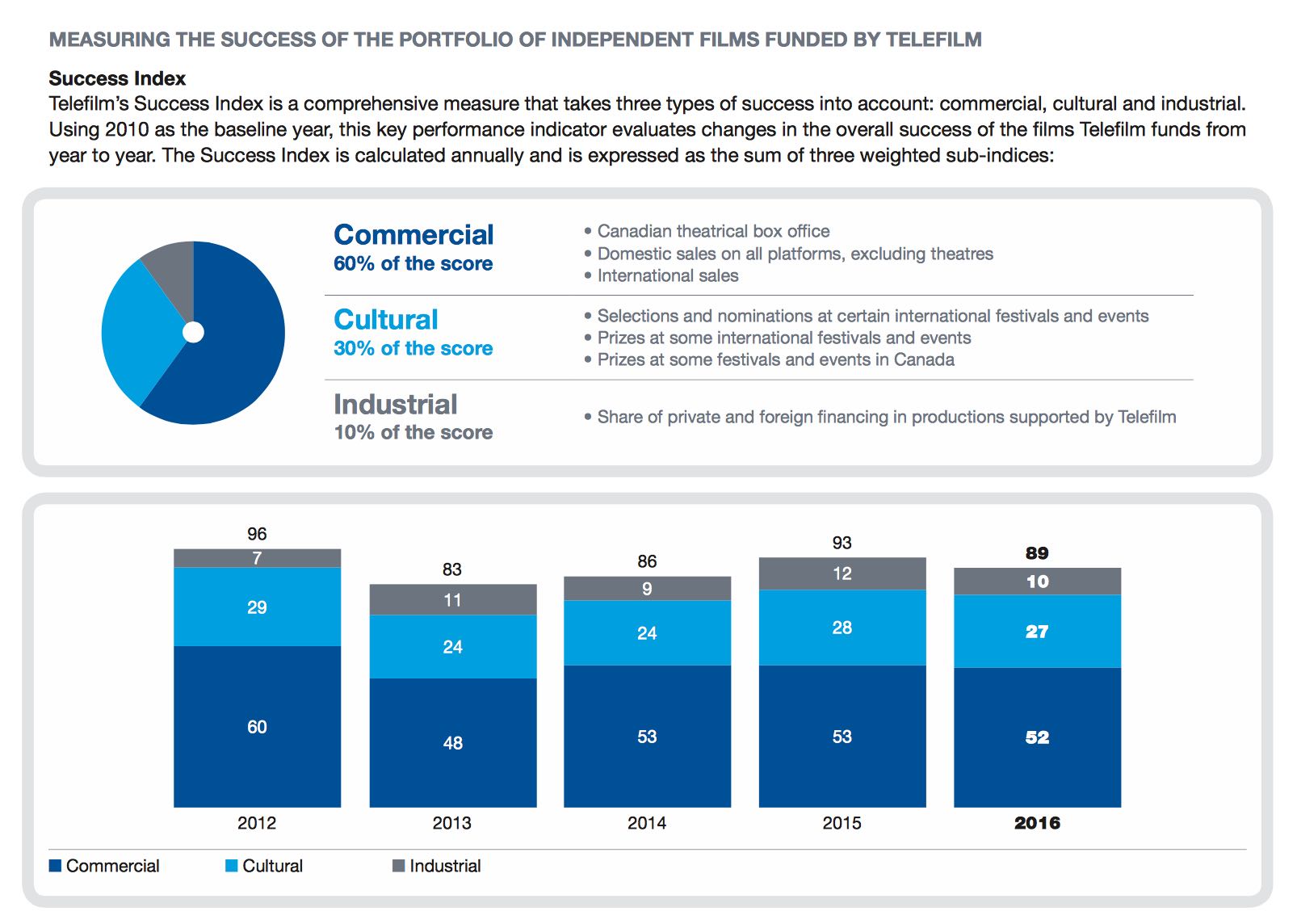 Measure of Success: The “Success Index” is Telefilm Canada’s way of gauging the ROI on the national interest. But not in dollars. The numbers are an amalgamated weighted ‘score’ of success. Source Telefilm Canada Annual Report 2016-2017.

The battle for box-office will never be won. We suffer the same way that every other national cinema suffers in the face of Tinseltown’s onslaught of big shiny things. For every Maudie there will be a Black Panther, weighing the scales in Hollywood’s favour and keeping the percentage of money spent on domestic product chronically low. We don’t make Fantasia or Pixar spectacles. We’ve got Norman McLaren and co-productions like the Oscar-nominated story of a girl in Kabul, The Breadwinner.

“The one comment I hear the most from students is that Canadian films feel more true — more honest. We deal in reality… It’s something you can recognize. And if you actually show a place on screen where someone has actually been, it’s hugely exciting.”

“The one comment I hear the most from students is that Canadian films feel more true — more honest. We deal in reality… It’s something you can recognize. And if you actually show a place on screen where someone has actually been, it’s hugely exciting.”

Corder says there’s no magic cauldron or Mickey Mouse solution. For her and Blum it’s a long game. Develop the appetite early, make it easy to consume, and people will come back for more.

“So far, so good,” she says. “It seems we’re inching our way out of self-loathing.”

Spotlight Film: The Breadwinner, the Canada-Ireland co-production about a girl in Kabul was nominated for an Oscar for best animated feature. Find a screening near you.

No Replies to "Happy National Canadian Film Day! Yes. We Have One."