It Comes at Night Lacks Climax

Movie Review: It Comes at Night

Viral contagion, zombie apocalypse and family values smoke and smoulder for a creepy mood, but Trey Edward Shults’s End-of-Days story gets buried in a shallow grave

It Comes at Night 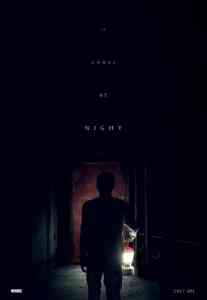 Maybe I’ve just been reading too much of Margaret Atwood’s dystopian fiction. But there comes a point when End-Of-Days detail becomes all-too dreary to digest. I’ve watched the White House crumble, the Capitol explode, the Eiffel Tower disintegrate and the human species reduced to breathing batteries for The Matrix.

And those were the fun ones. Couple in a few viral contagions and some aliens, and extinction starts to look like a pretty good option. Yet, the will to survive remains, ensuring the characters who populate It Comes at Night manifest human destiny as they find themselves alone, seeking shelter from a society in ruin.

The central problem seems to be a sickness with Ebola-like symptoms. Blood blisters form on the skin, followed by a flood of redness to the eyeballs, then a complete oral ooze of black liquid for a grand finale. It happens in a matter of hours, and it’s the first thing we witness in this second effort from Trey Edward Shults, the Texas-based director of Krisha, winner of the Jury and Audience awards at South by Southwest in 2015.

An old man gasps for breath as two people in gas masks wrap him up, place him in a wheelbarrow, and rest him in a grave. Then they shoot him in the head and light his body on fire.

When the masks come off, we realize this is a family, and they just killed grandpa. A memorial service offers some explanation, and the plot — soon to be one of many — fills in: The cities are falling apart, forcing people to survive in the wild.

The family we join at the top of the film live in a beautiful home, far from the malady-laden crowd. They’ve survived by boarding up their windows and locking the doors, keeping sickness and strangers out. Grandpa’s hastened departure was an act of mercy, as well as safety, if you ask Paul (Joel Egerton), the father and protector of a dwindling brood.

With only his wife, Sarah (Carmen Ejogo), and son, Travis (Kelvin Harrison Jr.) left to love, he’s determined to protect them no matter what. Grandpa proved that point with a bullet in the head.

What follows is a confusing concoction of zombie genre, horror gore, and half-baked psychodrama as Shults imagines the nuclear family in a post-atomic age.

Creating a super-collider for character, the writer-director introduces us to the biggest threat facing Paul, Sarah and Travis — besides the viral Grim Reaper: Another person. Will (Christopher Abbott) breaks into their house in the middle of the night. Thanks to the family dog, Paul, Travis and some family firearms, Will is muzzled and bound to a tree all night long.

At this moment, we’re expecting the title to become relevant. If It Comes at Night, surely, the morning will reveal what that “It” is.

Yet, all we see is Will, looking tired and desperate. He begs for his life. He tells Paul he’s a family man, too. He thought the house was abandoned. He’s just trying to feed his wife and kid. He would have done the same thing as Paul in the same situation. Please believe he’s telling the truth. He only wants to live.

For the viewer, this is where the movie starts to get interesting because we’re as paranoid as Paul. We feel an itch to just pull the trigger and take no chances. The guy had a gun and he broke into the house.

Then again, he’s another human being. If he’s sincere, the family unit could be stronger with more people to protect it from the outside. But what if he’s not telling the truth? What if he’s the door to more sickness?

There’s a fresh mound of metaphysical content to mull over, and in the end, that’s the only thing that redeems this somewhat unsatisfying horror experiment. We’re forced to think about what we might do in the same situation, from a variety of dual perspectives — son and father, husband and wife, boy and dog.

Each relationship explores the bounds of personal and moral responsibility in a social vacuum. Each character has a direct effect on the other, so what message are they transmitting? If the body politic gets sick, is there hope the single cell — the individual — can survive the infection without passing it on?

Too bad the plot didn’t dig a little deeper, or turn up any fresh ground, because a good idea winds up in a shallow grave, drenched in gasoline and set on fire with a matchbook of horror cliche: A flash of heat, followed by a long, choking smoulder of psychological breakdowns that swirl with dramatic potential, yet disappear into thin air.

Review: It Comes at Night

Viral contagion, zombie apocalypse and family values smoke and smoulder for a creepy mood, but Trey Edward Shults's End-of-Days story gets buried in a shallow grave for a rather unsatisfying ending, despite some interesting ethical scenarios that push the viewer to ask hard questions. -- Katherine Monk

No Replies to "It Comes at Night Lacks Climax"