Eye candy helps Keeping Up with the Joneses

Movie review: Keeping Up with the Joneses

Keeping Up with the Joneses 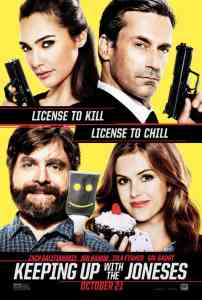 Mind the income gap: Keeping Up with the Joneses rewrites class ambitions as espionage envy.

(Oct. 20, 2016) Back at the turn of the last century, in the breath that preceded flappers, Jay Gatsby and eventually, the Great Depression, Arthur “Pop” Momand created a comic strip called Keeping up with the Joneses.

The panels were framed by changing times. The industrial revolution had given rise to a 20th century vision of the middle class, and as the have-nots slowly began to have, the jockeying for status through consumer items kicked off in earnest.

Suddenly, family life was a race to the cash register, with success measured by the final tally. One hundred years later, little has changed.

We’re still on the same consumer circuit, only now we’re keeping up with the Kardashians as they tour their walk-in closets in Jimmy Choo shoes. It’s the same social race for status as before, only we’re losing ground in every episode. The income gap is now a Grand Canyon.

Trying to keep up with anyone in a higher tax bracket demands an Evel Knievel stunt and a rocket-powered motorcycle, which goes someway toward explaining the central premise in Greg Mottola’s (Superbad) latest comedy.

Jeff (Zach Galifianakis) and Karen Gaffney (Isla Fisher) are an average suburban couple: they drive a minivan, have two kids, and daydream about the days when they both had a functioning libido. Jeff and Karen are supposed to be reflections of you and I, a fact made undeniable by Jeff’s job in the “human resources” department of a military contractor.

Their new neighbours, on the other hand, are the exact opposite. Tim (Jon Hamm) and Natalie (Gal Godot) are two statuesque hotties that would look more at home on a Gulfstream 650 than a rider mower, but for now, they’re the Brad and Angelina next door – and Karen is rapt.

Looking to escape her Chrysler Caravan of a life, she rips a Bewitched page from Mrs. Kravitz and starts spying on Tim and Natalie, only to discover the gleam team next door may be professional spies.

It’s Mr. and Mrs. Smith meets Fun with Dick and Jane as the super sexy professionals are forced to team up with the dumpy and frumpy real folk.

It’s a dependable formula because most of us drive minivans, shop at big box stores on the weekend and feel entirely powerless when it comes to confronting authority. As a result, watching Jeff and Karen shed their sheepishness is half the fun. It’s like an episode of What Not to Wear with Tim and Natalie playing a commando version of Stacy and Quentin, teaching the finer points of accessorizing with concealed weapons.

It’s cute, in that post-Tarantino way: Blunt violence brushes up against cheeky sarcasm and sight gags to create a slightly creepy comic concoction that relies on action and Galifianakis’s goofiness to function.

None of it feels new. Yet, because Hamm and Godot are so darn attractive, it’s impossible not to watch. In fact, whenever they’re on screen, the predictable plot about selling government secrets seems to melt into the backdrop – and just as well.

There’s more novelty and suspense in watching Isreali supermodel and actress Godot fly through a plate glass window wearing Prada than watching Galifianakis and Fisher rehash the gags of Get Smart.

Moronic set-ups and labored deliveries sap the fun factor, and this movie has its fair share of dud scenes and warmed-over moments. Unlike previous efforts, Mottola does nothing fresh here. And yet, Keeping Up with the Joneses still functions as a decent escape vehicle because it delivers something we continue to crave on the carousel, where the Kardashians and Joneses of the world will always be on the horse ahead of ours.

In its own crass and frequently vulgar way, Keeping Up with the Joneses kicks some class—mocking the Jil Sander sweater set and poking fun at the Anthony Bourdain style of gourmet and globe-trotting shabby chic.

The Joneses are revealed as a false icon, a fake symbol of social success with sketchy motives. Jeff and Karen, meanwhile, aren’t just a solid married couple with an underwhelming sex life, they’re real people capable of genuine heroism.

If the movie itself had mirrored the same core values, instead of chasing after the big-budget set pieces with predictable explosions, Keeping Up with the Joneses might have been more than just a decent escape. It could have been a comment on “keeping up” and the whole consumer phenomenon.

Review: Keeping Up with the Joneses

Superbad director Greg Mottola takes a century-old formula about class climbing and turns it into a predictable comedy starring Jon Hamm and Gal Godot as two super spies posing as a suburban couple. Zach Galifianakis and Isla Fisher play the average married couple next door who eye their gorgeous new neighbours with envy, leading to a cascade of pratfalls that keep this weary premise chugging through a familiar landscape of escapism. --Katherine Monk

No Replies to "Eye candy helps Keeping Up with the Joneses"