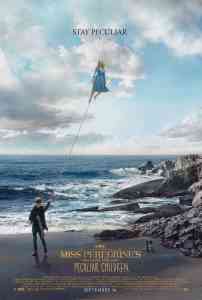 Tim Burton does one thing extremely well, and it’s descending into the caverns of our collective childhood and retrieving a sense of surreal dislocation.

Kids aren’t anchored the same way grown-ups are by the pressures of the adult — and supposedly real — world. And novelist Ransom Riggs obviously was in touch with that metaphor when he created a character named Emma (Ella Purnell), a kid who can manipulate air and has the pleasant, if problematic, ability to float.

She’s just one of the ‘peculiars’ staying at Miss Peregrine’s Home for Peculiar Children, a timeless oasis of pure tolerance, where every difference is embraced as something beautiful, meaningful and in some cases, very useful.

The brainchild of Riggs, a first-time scribe who stumbled into mega-success with this young adult novel about outsiders with massive potential, Miss Peregrine’s Home for Peculiar Children owes some of its ideological DNA with X-Men, the Marvel Comics creation about mutants with amazing powers.

The dilemmas are very much the same: they are distrusted, they run the risk of being used as weapons or scapegoated for crimes, and they have a hard time getting along with one another – because they’re all so, well, different.

What makes this particular movie feel peculiar in its own right is the man behind the camera: Tim Burton.

Burton built a career out of the cracked fragments of kid reflection, from Edward Scissorhands to Beetlejuice and The Nightmare Before Christmas –movies that reached a bony hand into the recesses of memory and rooted around for a forgotten feeling: fear edging on ecstasy.

It’s what happens when you surrender to the unknown, and that’s exactly the challenge presented to young Jake (Asa Butterfield), a boy on the verge of manhood. Jake stumbles into the secret world where Miss Peregrine and her flock are hiding after his grandfather (Terence Stamp) is found dead with his eyes missing.

Jake is heartbroken, but he also remembers his grandad’s stories about growing up on a small Welsh island with Miss Peregrine and the peculiars. Telling his parents that a visit to the place he’d heard so much about will help him heal from the trauma, Jake and dad (Chris O’Dowd) head to Wales.

They find nothing, save the usual townsfolk, half-fermented from beer and rain metabolizing beneath boiled wool sweaters. Jake is despondent, goes for a walk, and suddenly ends up before Miss Peregrine – and the rest of the would-be circus freaks.

It’s a magical connection, but danger lurks in the form of Hollows – spider-like creatures that eat children but cannot be seen by ordinary humans– and Barron (Samuel L. Jackson), a former Hollow who’s being trying to regain his enhanced humanity by consuming the eyeballs of young people – and all those who have yet to see the horrors of the world.

He’s the second villain this summer to take the eye-candy idea literally, and let’s face it: no one wants to have his or her eyeballs eaten. Alfred Hitchcock certainly got it, and so does Burton, bringing his unique style to an otherwise predictable fantasy featuring an end of the world scenario, and the unlikely heroes who set things right. Buy elavil online

Most of what Burton does comes through his twisted pictures, tinted in a way that suggests something close to death, or molding. He’s at home in the mustiness that makes up Miss Peregrine’s charm. He sinks his teeth into the Second World War period design and unleashes Eva Green, typically cast on the sinister side, into a world of sexy subversive heroines.

Green is wonderful because she’s got just a smirk of mischief that mingles perfectly with a maternal element, a slightly darker Mary Poppins – one who smokes a pipe instead of carrying an umbrella, and one who stops time in its tracks instead of breaking into song. Buy lexapro online

It’s a joy to behold. Put her energy in the same frame as Jackson’s, and it’s electric. It’s also, in some ways, entirely overcooked.

The editing doesn’t seem to keep up with the story and the suspense slowly seeps out the corners of the frame as we wait for things to happen. Yet, if anyone can sell charred wreckage as a fresh start, it’s Tim Burton – back in his haunted wheelhouse. Buy effexor online

Tim Burton creates a murky and melancholy world inhabited by mutant children in this junior take on the X-Men idea. Here, Eva Green is headmistress to a group of peculiar children who are in jeopardy of losing their eyeballs to a monstrous half-human played by Samuel L. Jackson -- who sinks his teeth into the somber scenery with drooling enthusiasm. -- Katherine Monk