Politics: Looking back at the first BC NDP victory in 1972

Rod Mickleburgh remembers the day the “socialist hordes” stormed the gates of Government House and Dave Barrett took the oath of office. There was no ceremony, no dancers, no tweets, but British Columbia would never be the same.

Watching the joyous, almost giddy swearing-in of the province’s new premier and his gender-balanced cabinet, I couldn’t help thinking of BC’s very first transition of power to the NDP, so long ago the Vancouver Sun had two full-time labour reporters. That historic ground-breaker took place way back in 1972, or five years before David Eby, the province’s new Attorney General, was born. July 18 was only the third such right-to-left tilt in BC history. Of course, that’s three more than the zero Stanley Cups won by the hapless Canucks, and just enough to keep politics interesting and a semblance of two-party democracy alive in BC’s polarized environment. No wonder John Horgan couldn’t keep that big goofy grin off his face. But the circumstances could not have been more different than the first official visit to Government House by an NDP premier-in-waiting. No live TV, no tweets, no hoopla from First Nations dancers. Very little buzz at all. Yet it was a pivotal moment for the province, never to be the same again. So, for David Eby and “all you kids out there,” return with us now to that thrilling day of yesteryear, when NDP leader Dave Barrett succeeded the indomitable W.A.C. Bennett as premier of British Columbia.

…So, for David Eby and “all you kids out there,” return with us now to that thrilling day of yesteryear, when NDP leader Dave Barrett succeeded the indomitable W.A.C. Bennett as premier of British Columbia…

Given the NDP’s string of 12 consecutive, electoral defeats, going back to the formation of its CCF (the Co-operative Commonwealth Federation) predecessor in 1933, it was a day many thought they would never see in their lifetime. Against all expectations, however, the party’s 13th campaign proved lucky beyond imagining. On August 30, 1972, Bennett’s 20-year grip on power came to a decisive end. The NDP won a stunning, landslide victory that few, beyond Barrett and a few canny observers, saw coming. The hysteria, bedlam and sheer outpouring of joy at party headquarters that night was off the charts. The “socialist hordes” were inside the gates at last.

Yet such was the strange, almost surreal, nature of the times, like Monty Python’s depiction of the dull life of Ralph Mellish, suddenly, nothing happened. Barrett had no idea when he would actually get to be premier. The shattered, 72-year old Bennett said nothing about how and when the transfer of power from Social Credit would take place. An eerie, political silence descended on Victoria. Unsure of protocol, for much of the next two weeks, Barrett sat at home in Coquitlam, twiddling his thumbs, waiting for a summons to Government House. Finally, on the morning of Sept. 15, Bennett officially resigned, and the long-anticipated, formal phone call from Deputy Provincial Secretary Lawrie Wallace came through. The boyish, joke-cracking, 41-year old social worker, son of an East Vancouver fruit peddler, would be sworn in that afternoon as premier of British Columbia, the first Jew and the first socialist to hold the province’s top elected position.

The hysteria, bedlam and sheer outpouring of joy at party headquarters that night was off the charts. The “socialist hordes” were inside the gates at last… Yet such was the strange, almost surreal, nature of the times, like Monty Python’s depiction of the dull life of Ralph Mellish, suddenly, nothing happened.

Still, given the absurdly short notice, Barrett had to hurry. He scrambled his wife and kids into the family Volvo and headed off to Tsawwassen for the ferry to Swartz Bay. The premier-to-be’s vehicle took its place in line with everyone else. Once on the other side, Barrett realized he didn’t know exactly where to go. Fishing a dime from his pocket, he used a pay phone at the ferry terminal to call Government House for precise directions. “I think he reached the gardener,” Shirley Barrett laughed later. Barrett parked the car in the visitors’ parking lot, and the family sauntered happily up the driveway. Barrett’s tie flapped casually in the breeze, his teenaged sons grudgingly wearing jackets, but tieless. 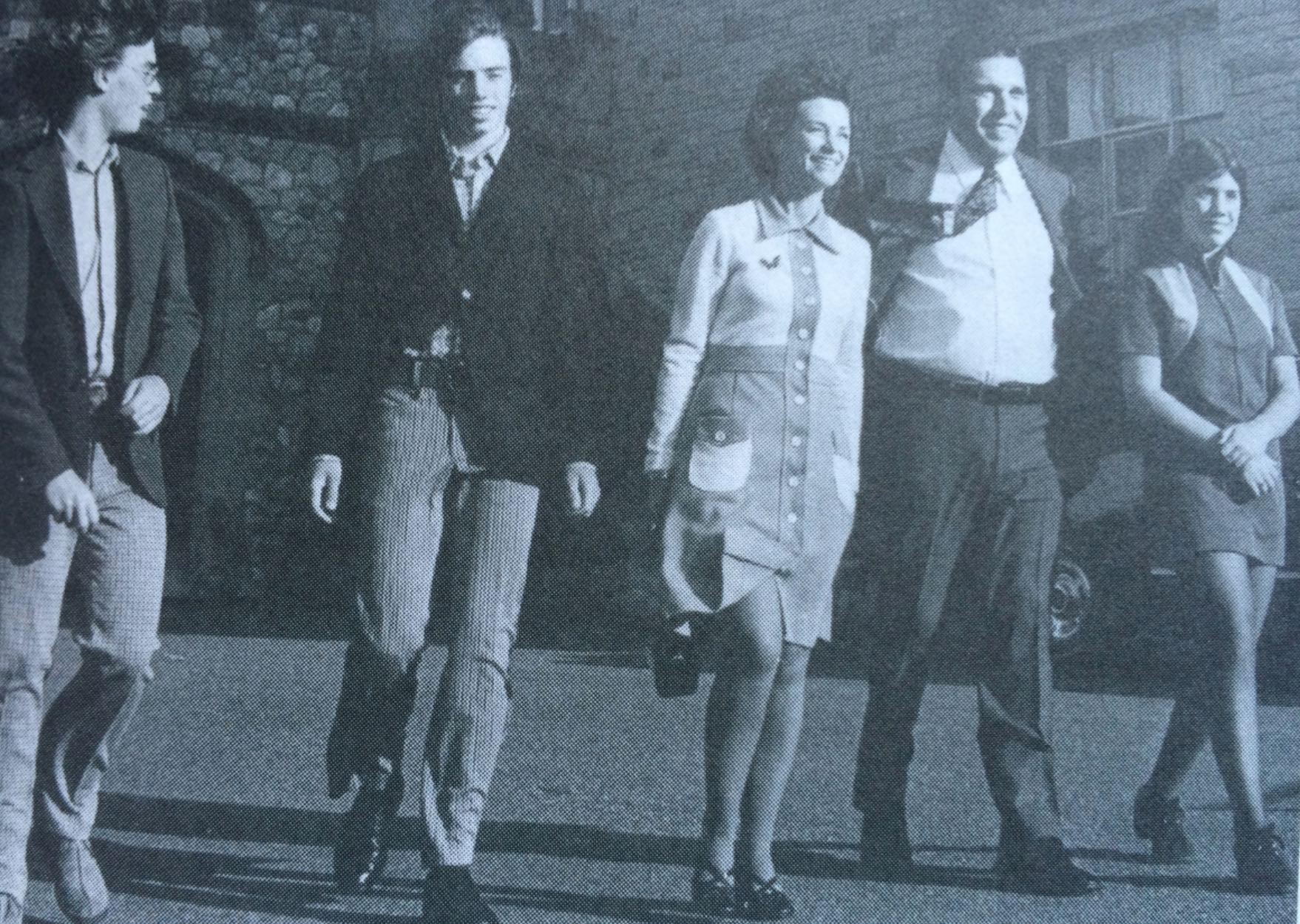 Winds of Change: Dave Barrett and his family approach Government House for the swearing-in ceremony – minimal as it was.

The new premier was sworn in before a few officials and associates, family and the media. As he signed the book, a photographer asked him to “look up, Mr. Premier.” Sun columnist Allan Fotheringham reported that Barrett displayed a look of surprised delight at hearing himself addressed as “premier” for the first time. Afterwards, he lifted a glass of champagne and proclaimed: “This breaks a 20-year fast.” Outside, queried how he felt, the province’s 26th premier replied: “I feel a little more honourable.”

Sun columnist Allan Fotheringham reported that Barrett displayed a look of surprised delight at hearing himself addressed as “premier” for the first time.

An hour later at the legislature, the province’s first socialist cabinet was sworn in. Fotheringham watched Barrett, closely. He wrote: “[He] wore a continuing grin of simple pleasure. It was not a smug, greedy look. Just a boyish failure to subdue his true feelings.” It was if he knew already his government would fundamentally change the province. There would be no hesitation, no turning back.

Four and a half decades later, it was the turn of another NDP leader to take the oath of office. This was a far more public, more high-spirited swearing-in than the low-key ceremony that ushered Dave Barrett into office. The ornate room at Government House was packed, befitting a date for the transition set well in advance, rather than by the back-of-the-envelope whim of Wacky Bennett. TV networks carried the ceremony live. First Nations dancers were front and centre. All 40 NDP MLA’s were there, brought to the august residence in a rented bus. “That’s the way I roll,” said Horgan.

The atmosphere could not have been more happy and relaxed. Lieutenant-Governor Judith Guichon, who made the critical, pressure-packed decision to reject Christy Clark’s request for an election and call on the NDP to give government a whirl, got into the spirit of things. After Horgan, while taking the first oath of office, awkwardly stopped at “I” without repeating his full name, she quipped “He’s a quick learner” when he got the second and third oath right. Her Majesty’s Representative also gave Agriculture Minister Lana Popham an affectionate hug, after Popham inked her name in the ceremonial book. It was that kind of affair. 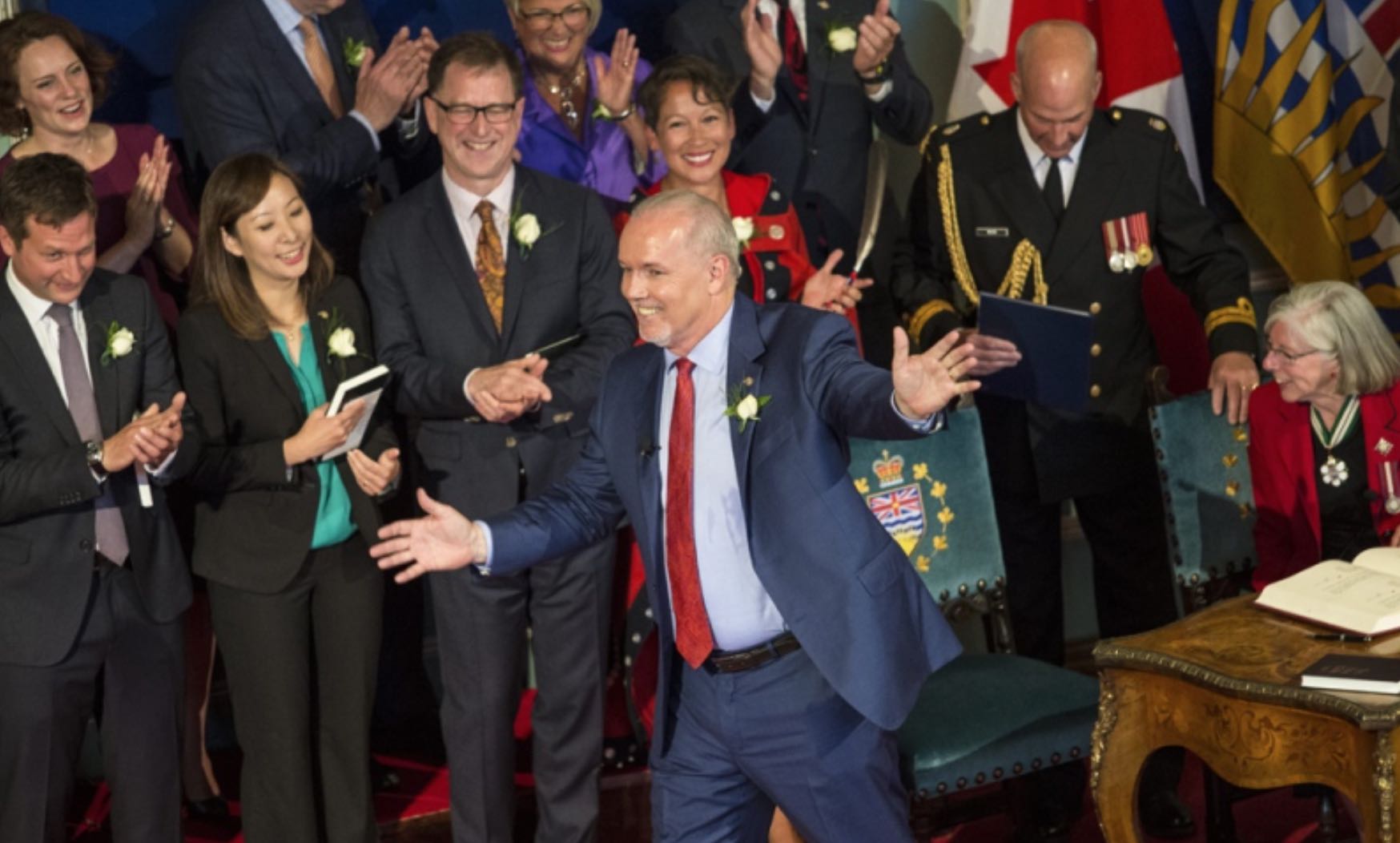 Governing is never easy, especially when so many are out to get you.

Now comes the hard part, of course. Governing is never easy, especially when so many are out to get you. But Horgan has wisely copied one of the positive pages from the Barrett playbook: Bring in simple and popular measures that help those who need it most right off the bat. Besides quickly increasing the minimum wage and welfare rates, the Barrett government enacted as its first order of business a guaranteed “mincome” of $200 a month for the province’s senior citizens. The first program of its kind in North America, it remained the most cherished of all the far-reaching moves by the NDP over the next 39 months. Mincome, said Social Services Minister Norm Levi, represents “the unfinished work of the socialist movement in its concern for people of all ages”.

On his third day in office, Horgan hiked disability assistance and welfare rates by $100 a month, the first welfare increase in more than 10 years. It was a good start.

For more Mickleburgh, visit The Ex-Press archive or visit Mickleblog.com.

No Replies to "Right to Left: Watching the Political Pendulum Swing"