The American Dream always looks better on the beach in a bathing suit, so get ready to soak up some eye candy as Dwayne Johnson resuscitates a small screen classic 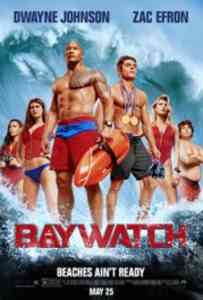 It’s red and shaped like a torpedo: Baywatch floats

There’s just something about Dwayne Johnson. The Rock has a softness to him, a patina of soul that transcends the sum of his hardened human parts. It’s why Baywatch is more than a juiced up piece of recycled junk with swimsuits and slo-mo. The Rock’s stoic core anchors this empty vessel, and gives TV’s grand dame of syndication a chance to cruise again.

Even he knows it. In a press interview for the film’s generic sound bites, Johnson says the best thing about the movie is: ‘Me.’ Anyone else says that, and they’re a creepy egotist or Alec Baldwin in follicular topiary. Yet, Dwayne Johnson says it, and it’s a mix of swagger and silent self-deprecation that makes it entirely forgivable. Because it’s a fact.

Johnson usurps the elevated life guard chair of Mitch Buchanan, the role once occupied by none other than the Teutonic Elvis himself, David Hasselhoff. There’s a wink, a nudge, and more than a few jiggling homages to the original show birthed in 1989, and still broadcasting images of Pamela Anderson’s cleavage to the outer rims of the galaxy to this day.

Baywatch has generated billions in syndication worldwide, making it one of the most successful TV shows of all time. International audiences ate it up, with the Germans taking a particular fancy to the leading man with a homey’s last name. It wasn’t the stories about diamond smugglers and criminals that attracted foreign viewers, but the distillation of the American Dream played out on surfboards and jet-skis.

Baywatch is about good versus evil. On the beach. In bikinis and Bahama shorts — unless there’s call for the lifeguard’s dress uniform, a mix of Navy whites and male spa attendant. It’s core values served up like a vodka cooler, and director Seth Gordon understood his role as bartender: Keep it cold, and don’t run out.

The active ingredients are already in the bottle, and apparently, our eyes get a little buzzed from seeing boobs and washboard abs. That’s why they slow everything down when things get wet, because it’s safety first for Mitch and his sand-covered crew.

Without getting into the awkward loops of story that feature a sinister real estate developer (Priyanka Chopra), a geek with red Speedo aspirations (Jon Bass), and a disgraced gold medal swimmer (Zac Efron), it’s safe to say Gordon has plenty of kegs to tap. At times, perhaps, too many.

Gordon fills the frame with gorgeous people and succulent scenery, but with the exception of Johnson and Efron, the cast functions more like decorative objects than human beings — some sexy, millennial savvy staging to sell the beach house.

At some level, you get the feeling Gordon is trying to flesh out the roles of the beach babes. He gives Kelly Rohrbach, Alexandra Daddario and Ilfenesh Hadera enough screen time to develop a hint of personality, but plucky as they are, they’re the pillows on the couch.

Johnson has the big part. And he works it to perfection. He’s the buoyant straight man that floats through every scene, bouncing off the canyon walls of character, swirling around pools of plot. In essence, he becomes the trademark red torpedo floatie that every Baywatch episode demands. When he’s there, everything turns out fine because he’s The Rock: sexually inert, yet strangely magnetic.

Baywatching demands commitment to an ideal, as well as a low-carb diet. You need to be vigilant. You need to be strong. You need to be loyal. Most importantly, you must embody and believe in the American ideal, with all its artifice, silicone enhancements and skin-deep obsessions. So grab a towel and get ready to bake. The beach is waiting, and The Rock has your back — as well as a bottle of sunscreen, a transcendent smile, and a bright red floatie at the ready.

Dwayne Johnson walks softly and carries a red torpedo float as Mitch Buchanan, heroic L.A. lifeguard and moral centrepiece in Baywatch, the dependably sexy iteration of the American Dream brought to the big screen by director Seth Gordon. Johnson has no trouble filling the shoes of David Hasselhoff, and offers Zac Efron and the rest of the cast a solid straight man to offset the sizzling silliness. -- Katherine Monk

No Replies to "Baywatch reveals power of floating red torpedo"