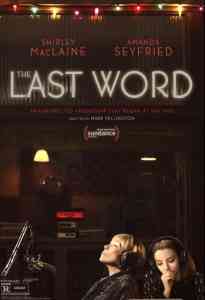 The Last Word: Gasps for a spontaneous moment

There’s something kind of sad about this movie, but not because it’s focused on death. Mark Pellington’s story of an overbearing old woman’s desire to rewrite her own obituary by manipulating a young reporter into sympathy feels false from the first pursed moments.

The artifice is where the movie stalls and finally sags, because any movie so insistent on dealing with the great beyond shouldn’t feel like a trowel of pancake on a corpse. It should be willing to face the diamond hard truth in all its facets and reveal the beauty of the flawed human condition.

The Last Word clearly had all the right intentions. Screenwriter Stuart Ross Fink ran the idea of a control freak facing death past his friend Pellington, and soon, they were casting Shirley MacLaine as Harriet Lauler – a former advertising alpha dealing with her own sour legacy.

People think Harriet is a nasty woman who wants to micromanage everything from her front lawn to her posthumous legacy, and to a large degree, they’re right. Harriet is a strong, dominant and highly skilled woman rendered redundant because of age.

Her problem is people skills. She has none. However, she still has enough power as a former advertiser and benefactor to the local newspaper to get a meeting with the editor. From there, she wrangles a personal meeting with Anne Sherman (Amanda Seyfried), the young obituary writer, and demands to see what kind of piece she would produce.

Not long after, Harriet reads the results. It’s short and shallow, prompting Anne to defend her work by describing the three necessary elements for a successful obituary: the admiration of friends and co-workers, the ability to touch someone in an unexpected and profound way, and a wildcard skill or secret that sets you apart.

Anne tells Harriet she possesses none of the above, forcing Harriet into a Hail Mary pass at redemption.

What follows is a gratuitous and frequently grating version of a self-improvement montage, only played out in complete scenes.

Harriet wants to go from Grinch to Super Granny in the space of two hours and Pellington is only too happy to oblige every sappy indulgence. Not only do we watch Harriet befriend a sassy kid from the wrong side of the tracks (Ann’Jewel Lee) to earn her mentorship badge, we have to sit through her stint as an alternative early morning disc jockey playing Nina Simone and The Kinks to show us her wildcard skill.

Every scene is designed as a tool to chisel out different character traits, and we can feel the outlines of the design in every choreographed exchange of scripted emotion. Nothing here feels spontaneous, organic or even all that profound.

At one point, I thought of last year’s best senior moment in Hello My Name is Doris – a movie that managed to surprise and charm at every turn while it reframed the post-menopausal female experience.

This movie was going for the same goal post in its play for older and female viewers, yet it possesses none of the same magic – though that’s no fault of the actors.

MacLaine sinks her teeth into the limp material with the ferocity of a Jack Russell, shaking it from side to side until the stuffing litters every scene. It’s all her show, but Amanda Seyfried doesn’t seem to mind – especially since Thomas Sadoski, her real-life boyfriend, gets to play her romantic interest, radio station manager Robin Sands.

Seyfried’s Anne Sherman certainly gets the short shrift of the screenwriter’s pen, lacking any deeper motivation, back story or defining characteristics. She’s a cipher who simply reacts to Harriet and her hellish demands. She’s like Clarice Starling to Hannibal Lecter, a foil to elicit sympathy, only Anne Sherman doesn’t present any prevailing emotion to either highlight or contrast Harriet’s hardness.

She’s just a pretty white marshmallow to melt in Harriet’s hot cocoa. The resulting concoction is harmless enough, but it never tastes real. It’s an artificially flavored formula that takes all the core ingredients of drama and turns them into processed powders. Seyfried and MacLaine add the right amount of water, but there’s not much they can do to change the fact that The Last Word is often too sweet, grows tepid by the second sip and feels cold by the final frame.

Shirley MacLaine takes an old bull by the horns in the role of Harriet Lauler, a former ad executive facing the final chapter. When she realizes no one really likes her, she forces the hand of the local paper into rewriting her boiler plate obituary. Amanda Seyfried plays Anne Sherman, the writer, while Ann'Jewel Lee plays a young girl she chooses to mentor as she makes her Hail Mary pass at moral redemption. This could have worked if any of the beats felt genuine, but Mark Pellington wrings the eye sockets dry with one forced scene after another. - Katherine Monk

No Replies to "The Last Word chokes on phoney tone"