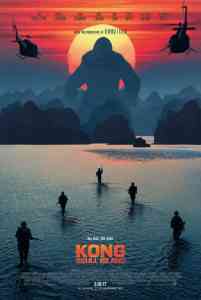 Some insist King Kong has been a race metaphor since the big hairy ape made his bow in 1933 atop the Empire State building. Most accept him as what Pauline Kael described as a “walking 40-foot genital.” And just about everyone can agree King Kong means extra large in any language.

But the oversized primate is about a lot more than theoretical white fear, or even a distinctly American take on Frankenstein. He’s proven a pop culture icon so popular, he returns to the big screen on a regular basis — on average, every ten years.

Perhaps it’s because he’s not like your run-of-the-mill “monster.” King Kong is a great ape, making him a distant Darwinian relative instead of an entirely alien entity. His creator, seminal movie mogul Merian C. Cooper, was highly interested in human evolution and spent many a day studying the fossils of Gigantopithicus — a prehistoric cousin who stood over ten feet tall.

He wondered what would happen to such a creature in a 20th century world, and the result was a Christ-like story of persecution and redemption: Willis O’Brien’s stop-motion monster was taken from his homeland, chained and turned into entertainment to serve man in the 1933 origin of the species. His only solace was the little lady, Fay Wray, who recognized his ‘humanity.’

Given the dearth of empathy these days, King Kong’s return to the big screen is timely — for both the human species, and for Hollywood.

This is the eighth Kong incarnation since O’Brien’s creation made history scaling the very apex of American industry and the producers behind the Godzilla franchise empowered relative newcomer, Jordan Vogt-Roberts, to pick up the petrified remains and animate them anew.

A young director who cut his teeth with Funny or Die videos and a feature film called The Kings of Summer from 2013, Vogt-Roberts doesn’t have a long history but he knows his source material.

This new Kong taps the core of the original, but also pulls on Peter Jackson’s earnest and overly long homage from 2005, as well as John Guillermin’s sizzling 1976 remake atop the World Trade Centre with Jessica Lange and Jeff Bridges.

The result lands somewhere between camp and slick action as Vogt-Roberts exploits modern visual effects while trying to maintain a grasp on human story. For the most part, it feels like a joyride as the director pulls donuts in the parking lot before making it onto the highway of storytelling.

For starters, the Kong story has typically unfolded in two distinct places: Skull Island, where Kong is a god and revered by the locals as their monolithic saviour, and in Manhattan, where the poor misunderstood primate is caged and chained, ridiculed and commodified by the so-called civilized world.

The contrast in backdrops was designed to showcase how far humans have drifted from our natural state in the name of social progress. Kong is the raw beast who is capable of love, sacrifice and large-scale destruction while the humans hate, kill and avenge for petty and ego-driven reasons.

As the title suggests, this one features only half the traditional geography. This Kong is all about Skull Island, a land mass continually circled by impenetrable storm systems. When a rare glimpse of the island reaches the eyeballs of a scientist — played here by John Goodman — he immediately tries to get the cooperation of the U.S. Army so he can make a visit.

The only problem is the politics: We’re resurrecting Kong at the tail end of the war in Vietnam, and U.S. intervention on small islands is a bit of a taboo.

Enter Col. Preston Packard (Samuel L. Jackson), the comic book version of Robert Duvall in Apocalypse Now. With his laser focus and top-notch helicopter piloting skills, he pierces the cloud veil of Skull Island hoping to find another enemy to give his life meaning.

Yet, even this fire-forged soldier is surprised by what he finds in this super-sized environment where human beings are at the mercy of 40-foot spiders and carnivorous flying dinosaurs. Indeed, some of the creatures are wonderfully terrifying — ramping up the potential to birth a whole new franchise featuring death matches between oversized beasts.

So with Godzilla waiting in the wings, Vogt-Roberts didn’t really need to take the monster to the big city. There’s literally plenty of fodder for the big ape to chew on in this version. He’s got sea monsters and giant octopi to contend with. He’s also got those pesky little humans who want a piece of his hairy assets.

The script throws scenes into the water like so much chum, waiting for Kong and the rest of the cast to give it a good gnaw for the cameras. Yet, at a certain point, you wonder why they bothered.

This movie doesn’t do anything new. It barely makes it through the plot material of the original. It simply presents some of the same elements differently. For instance, Brie Larson is the de facto Fay Wray, but she’s not playing the part of a distressed damsel, or even a flirty showgirl. She’s a photojournalist and a feminist who snaps artsy black and whites of the locals. She also tries to get Kong in her sights, but with the lens between them, we never feel any real chemistry between these two key agents.

The same goes for Larson and leading man Tom Hiddleston, who plays a British Special Forces operative and the would-be romantic interest. The English actor feels strangely out of place in this oversized landscape, as though James Bond landed in the middle of some B-movie burlesque.

Neither he nor Brie Larson really nail the right tone, and who could blame them? Vogt-Roberts isn’t quite sure what, deep down, this movie is all about. The plot meanders from vengeance to romance without any compelling direction, and instead of using the larger-than-life Kong to put human weakness into perspective, Vogt-Roberts uses him as spectacle.

Certainly the images of the big ape pulling helicopters from the sky and battling giant prehistoric monsters have a certain appeal. They are breathtaking spectacle, but they don’t land in any profound emotional reservoir.

The only part that truly works is the dynamic between Kong and John C. Reilly’s character, a fighter pilot who crashed on Skull Island during the Second World War. Reilly has the right mix of tenderness and eye twinkle to create a spark of sympathy so necessary for the formula to work.

The rest just feels like hyperbolic filler delivered care of a computer and comic book sensibilities. Maybe Kong: Skull Island was trying to stir up substance at the bottom of the American psyche with its story of the misunderstood outsider, but at the end of a rather long day, it’s just a muddy puddle of silliness.

Tom Hiddleston and Brie Larson walk around an island that time forgot as they stalk a larger-than-life pop icon we can’t seem to forget. This is the eighth incarnation of the great ape since he made his debut atop the Empire State Building in 1933, and where he’s always been seen as a social metaphor — an oversized avenger representing true human nature, a manifestation of America’s racial consciousness, a victim of over-commercialization — this new version seems entirely void of a deeper level. John Goodman plays the inquisitive voice of “science” seeking to pierce the cloud veil of Skull Island to find out why planes and ships disappear in its vicinity. Samuel L. Jackson embodies American military might in his role as a scenery shredding helicopter pilot and unit commander. All the pieces are here. Even John C. Reilly turns up as a downed fighter pilot marooned since the Second World War, and Tian Jing shows up for the Chinese audience. Yet, for all money — about $185 million — and all the talent, this oversized IMAX 3D spectacle is short on chemistry, and not even the charismatic Hiddleston and Larson can save the day, leaving this a romance between Reilly and the giant primate. - Katherine Monk

No Replies to "Kong: Skull Island reveals origin of the species"