Elle and the politics of rape

Paul Verhoeven’s provocation gives Isabelle Huppert a difficult and complex role, but the movie itself is a confused series of disturbing incidents about the meaning of sexual assault 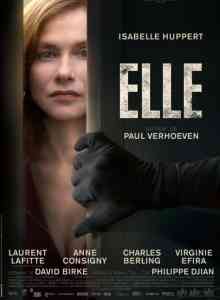 (In French with English subtitles)

Paul Verhoeven is a purposeful, not to say perverse, provocateur whose most famous movies combine psychosexual gamesmanship with a lot of overturned expectations. Not everything makes sense in a Verhoeven film, but you may not notice because of all the hot stuff, and there are still people who consider Showgirls to be a misunderstood masterpiece of knowing irony.

Those of us more willing to play it as it lies will find ourselves in the minority when it comes to Elle, a half-thriller, half-social satire about a dysfunctional French family — almost everyone here is horrible, in a dry Gallic fashion — and the terrible things that happen to them. The main one is revealed in the opening sequence when Michele (Isabelle Huppert), an elegant, rich and possibly sociopathic heroine, is raped in her elegant, rich (and possibly metaphorical) house in a Paris suburb. We hear the noises of the assault; Verhoeven’s camera lingers on Michele’s cat, which remains unmoved by the commotion. We look up just in time to see the masked attacker pull up his pants and scurry off.

The rest of Elle strips away Michele’s secrets as it follows her on a hunt for a particular sort of revenge. She doesn’t report the crime — she can’t trust the police, we learn — or even react to it in any emotional way: the lasting image is of Michele taking a post-attack bubble bath while a flower of blood blooms in the water. She does arm herself with pepper spray and a hatchet, but by the end, the movie seems to be telling us that being raped and beaten appeals to her after all, or at least to her fantasy of punishment, or perhaps a sense of perverted gratification.

Or maybe it’s enough to say that Elle is France’s official submission for this year’s best foreign language film Oscar.

It’s the sort of movie you might suspect could only be made by Paul Verhoeven, but keep in mind that Huppert — who is, I hasten to add, a fascinating study in control and subtle shifts of knowingness throughout this picture — also starred in Michael Haneke’s The Piano Teacher ( 2001) as a sexual masochist who, in one scene, kneels in a bathtub to slice herself with a razor. That’s when I left the screening, and imagine my embarrassment when it won the Grand Prix at the Cannes film festival.

Huppert continues to be a brave performer, not afraid to expose herself in every way. She doesn’t give too many clues about Michele, but she doesn’t have to: the film (based on a novel by Philippe Djian) supplies more than enough supporting material to persuade us that the character is unhinged. The actress only has to move quietly forward through the cacophony of emotional disasters, wearing that half smile, to create a complex personality.

Thus, for instance, Michele is a partner with her best friend Anna (Anne Cosigny) — with whose husband, it turns out, she is having an affectless affair — in a video game company. Shortly after the rape, she is supervising the company’s new game, in which a multi-tentacled monster is violating a woman with some of its tentacles. Michele tells the designer that the woman’s contortions of ecstasy are far too timid.

The designer is one of the men in her life who are either suspect or simply hapless; among the others a son who works in a fast food joint and is led around by his angry, entitled girlfriend, and an ex-husband whose creative well as a writer has run dry and has some ideas — really bad ones — for a video game. Michele expresses little emotion except for casual exasperation, although she does seem to like the neighbor across the street. We know this because she watches him through a pair of binoculars as he sets up a Christmas crèche in his front yard while she masturbates with the other hand.

Her parents form bookends of symbolism which may account for some of this emotional distance. Her mother is comic opera buffoon who has had a series of facial reconstructions so she can continue to attract younger lovers. Her father is in prison for a particularly foul mass murder — he not only slaughtered the neighbours, but he killed their pets too — in which Michele was implicated in the public imagination.

There is an acid edge of grim comedy to this, especially in a dinner party scene and at an angry funeral, but mostly it’s a baffling study of guilt. It’s meant to stir debate — is Michelle mad? Manipulative? A sexual master? A sexual slave? — but to create that kind of controversy, it would first have to be taken seriously as a work of drama. And behind the elegant classical score and the lovely costumes (Michelle has a new coat for every occasion), it teeters on the edge of parody. It’s not a movie about a troubled woman. It’s a movie about troubled filmmakers.

Review Elle and the politics of rape

Elle: Paul Verhoeven's new movie is meant to cause debate, but it's too dramatically muddled to take seriously. Isabelle Huppert is wonderful as a rich woman from a troubled family — her father is a mass murderer — who is raped. She plots revenge, but it turns into something else, and the film's sociopathy prevents us from understanding what it's trying to say. 2 1/2 stars out of 5 _ Jay Stone

1 Reply to "Elle and the politics of rape"