Denis Villeneuve’s latest may look like a simple first-contact story, but it goes much deeper as it questions the linear nature of time and the role of language 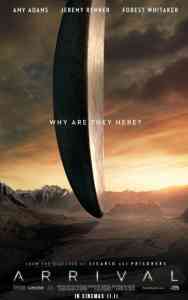 “Art affirms all that is best in man: hope, faith, love, beauty, prayer… A declaration of love: The consciousness of our dependence on each other. A confession. An unconscious act that nonetheless reflects the true meaning of life: Love and sacrifice.”

Might as well start with a quote from Andrei Tarkovsky, because Arrival is nothing if not a “sculpture in time.”

A subtle masterpiece that looks like a simple alien movie on the surface, Denis Villeneuve’s latest film opens a wriggling wormhole of thought. Beneath its familiar narrative structure and alien-looking flesh, it begs us to ask what time is, how it works, and how language patterns our experience of the world.

It seems like a little too much philosophy to swallow in a single gulp, but the beauty of Villeneuve’s entire oeuvre is that it functions on feeling first and foremost. He pulls us onto the pitching time-space platform through characters we care about, and in Arrival, we’re greeted by the warm, openly expressive face of Amy Adams.

She’s speaking to us in voiceover, telling us how this particular story begins. We see a young girl. A montage reminiscent of the old long distance phone ads begins as the voice-over continues and we realize this girl is the daughter of Adams’s character.

It’s all a beautiful blur of magic hour cinematography that ends just moments later as we watch Adams stroll onto a university campus. We learn her name is Dr. Louise Banks. She’s about to give a lecture on the difference between Portuguese and the other Romance languages when the handful of people in her class ask her to turn on the television.

The news channels are teeming with bits and images about an alien landing. Twelve giant black ships shaped like kidney beans are hanging over the Earth. No one knows why they are here, what they want, or how to establish communication.

The army taps Louise, a translator with a top level security clearance. Col. Weber (Forest Whitaker) debriefs her, takes her to the spaceship, and introduces her to Ian Donnelly (Jeremy Renner), a theoretical physicist also tasked with establishing communication.

At first, there’s a bit of rivalry between them as they tout their respective tools — language versus pure science — but once they make contact with the visiting life forms, everything starts to change.

It’s subtle at first. Ian and Louise start collaborating, but the closer they get to finding the answers, the more fear takes hold of the human race: Are the aliens here to help us, or to destroy us?

Like all alien movies, Arrival functions as a metaphorical probe for xenophobia. Right-leaning characters urge to nuke the alien shells. Lefty types plead for peace and understanding. But stuck right there in the middle of this alien space are Louise and Ian — two people struggling to understand each other, as well as the foreign life forms.

Villeneuve creates various sets of reflecting surfaces through character, resulting in a slightly warped glimpse into the infinite. Yet, to keep us anchored to the here and now, and to crank up the tension between worlds, Villeneuve and cinematographer Bradford Young (Selma, A Most Violent Year) show us the more banal side of an alien visitation.

We see grunts in mobile barracks, hose-down stations, and soldiers making phone calls home. Villeneuve and the production designers show us the human minutiae. It not only adds authenticity to an otherworldly idea, it offers some dramatic juxtaposition.

Humans are draped in orange safety suits and awkward protective technology. The aliens, meanwhile, float in a contained cloud and look like giant hands — as though a little bit of Michelangelo’s Sistine Chapel poked through the atmosphere to give us a tickle.

He echoes the contrast in the whole shooting style: breaking the frame into planes of perpetually shifting focus: Things that would seem to co-exist in the same frame have a habit of blurring in and out, forcing us to feel the volume of space within the frame itself — and the connection between each object.

It’s almost quantum in its suggestion: Where we focus our attention, and what we anticipate, can drive our understanding of reality. But don’t worry. It’s all percolating beneath the gorgeously poetic surface.

Villeneuve’s pacing is impeccable, moving in narrowing narrative circles until we’re carried by the coriolis effect and swallowed by the unknown. Circles, ovals and all kinds of spheres are part of the production design, but they also play a key part in the story because the alien language is circular.

Looking like a coaster at a coffee bar coupled with a Rorschach image, alien ‘script’ is non-linear. It appears at once as a whole concept. Theoretically and optically, it’s the Ouroboros — a snake eating its tail, the ancient sign of eternal recurrence and a favoured symbol of Nietzschean philosophy.

It’s no coincidence. Arrival articulates several Nietzchean ideas, from deconstructing time as a concept to questioning the divine — without once mentioning Nietzsche, or any philosophical stance.

This movie puts the big questions into our own heads, and more importantly, into our own hearts. Good movies make you feel smart because they speak a human truth we all understand without having to simplify the mystery.

So bang a gong. This one goes deep, and the ambient whale-like pulses of bass on the soundtrack provide the perfect score for a journey that not only satisfies any latent science-fiction craving, it may well reboot your subconscious with a jolt of love.

Denis Villeneuve’s latest masterpiece looks like a simple alien movie on the surface, but opens a wormhole of thought as it asks us to question linear time, the importance of language on experience and our anthropocentric view of the universe. Yup. It seems like a lot of philosophy to swallow in one quantum gulp, but the beauty of what our Canadian genius does is he tells the story through feelings first. This is a movie that makes you feel before you think, which is why it’s one of the best movies of the year. Amy Adams, Jeremy Renner and Forest Whitaker are integral parts of this magical ride. -- Katherine Monk

No Replies to "Arrival proves mind-altering"