Inferno: To Hell and Back 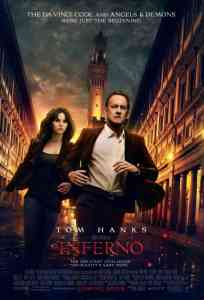 Run for your life!

Apocalypse now, soon, or someday down the road, it’s a theme and a creepy feeling that’s wrapping its fiery orange arms and lips all around us right now. So congratulate Tom Hanks and Ron Howard on their excellent sense of timing.

Mere days before the masses head to the polls, they are giving us the ultimate in cautionary tales with the release of Inferno, the third installment in their adaptations of Dan Brown’s Angels and Demons series.

A mystery franchise for the more bookish souls out there, Brown’s novels feature the academic version of James Bond in the character of Robert Langdon. An Ivy-league symbologist who speaks several languages and solves ancient puzzles in his spare time, Langdon has already cracked the Da Vinci Code and wrestled with Angels and Demons by the time we catch up with him in an Italian hospital at the top of Inferno.

He’s just barely regained consciousness when he discovers someone is trying to kill him. With no memory of what’s happened, or why he’s been out, he follows the life-saving advice of a young doctor named Sienna Brooks. After they narrowly escape the clutches of a ferocious female assassin, the two of them begin a series of expository dialogues that help us follow the detailed contours of the action.

A crazed billionaire (Ben Foster) believes humanity is a viral scourge on the planet that must be eliminated. He creates a biological weapon: A contagion that will decimate the species. Only Robert Langdon, and maybe a few co-stars, can stop the doomsday disease.

As in all the Dan Brown books, the larger story arc isn’t really the attraction. It’s the little history lessons along the way that create the engagement. Langdon offers suggestive insights into Judeo-Christian mythology and questions some of our fundamental assumptions as 21st century citizens – filling our cups with conspiracy theories about everything from the Holy Grail to the Last Supper.

In Inferno, we get a digest of Dante, the man who mapped out hell in the first chapter of The Divine Comedy back at the turn of the 13th century. In order to solve the mystery and save the world, Robert Langdon will have to explain various Dante stanzas, stand in front of specific works of art with a docent’s patience, and take us behind the red cordons of the most famous museums in the world.

It’s like doing an afternoon of exotic street food with Anthony Bourdain, an informative and entertaining outing that relies – almost exclusively – on the natural charisma of the man in front of the camera.

Tom Hanks may not have the hardboiled kitchen swagger of Bourdain, but he does have a similar, understated confidence steeped in knowledge. Hanks is at his best when he’s playing the ideal leader and fallible human in the same breath, the way he did in Apollo 13 and Captain Phillips and Sully, and well, just about every movie he’s ever made in the last two decades.

As Robert Langdon, he kind of fits the description offered by a character in The Da Vinci Code: “Although professor Langdon might not be considered hunk-handsome… this forty-something academic has more than his share of scholarly allure. His captivating presence is punctuated by an unusually low, baritone speaking voice, which his female students describe as ‘chocolate for the ears…’”

Hanks’s vocal chords hardly qualify as chocolate – maybe closer to a carob nut cluster –but even at the age of 60, he’s still got a youthful gait, a dynamic screen presence and enough raw man mojo to make us believe there’s a frisson of chemistry between Langdon and the much younger Sienna Brooks (Felicity Jones).

It’s a plot line that neither Brown nor Howard push too hard, which comes as a bit of a relief and a refreshing change in a film landscape often fouled by a sexist age chasm. Sure, these Angels and Demons stories are fantasies that play to a shared history of Hardy Boys and Nancy Drew detective work, but they are tailored for a grown-up world.

Robert Langdon is an adult, and that alone allows him to stand in contrast to much of what’s happening around him as various characters pick sides. Perhaps the most interesting character of all is that of Harry Sims (Irrfan Khan), the corporate moneyman who shuffles funds and assets from the safety of a secret cruise ship.

We make assumptions about Sims based on his function and his proximity to power, but Brown and Howard happily blow them all apart – giving Khan a chance to show off his ample charm, humour and physical elegance.

Together with Jones, Omar Sy and Sidse Babett Knudsen (Westworld, Duke of Burgundy), the supporting cast brings the required sophistication to the frame, allowing Howard to nail the right mood.

Oozing warmth and intelligence, Inferno feels like a private tour of a landmark museum on a cold, rainy day: Enveloped by enlightenment, but pleasantly distracted by the whiff of waxed wood and ancient patinas while remaining warm and cozy in the face of the pending apocalypse.

No Replies to "Inferno: To Hell and Back"