Looking to reaffirm his brand as an All-American action hero, Tom Cruise reboots Lee Child’s franchise about an ex-military cop who operates outside the law to settle ugly scores 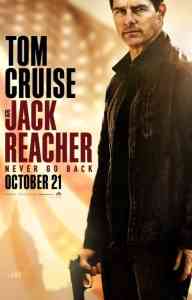 An actor who doesn’t seem to act as much as produce sexy moments for himself to inhabit on-screen, Cruise’s performance value is a function of the larger brand — sort of like Donald Trump, only with better hair, makeup and writers who understand what a real American hero is supposed to look like.

Jack Reacher is a loner. He rides in the back of pickup trucks with dogs. He walks into dark alleys without a gun and is capable of facing down half a dozen thugs with a few commando moves.

Reacher was originally the creation of Lee Child, the author who gave birth to the character in a series of revenge novels inspired by his time at Granada Television. Child, then known as Jim Grant, felt the broadcaster was guilty of oppressing its employees, a complaint he voiced for two years as a shop steward before finally leaving in 1995.

Jack Reacher was his answer to the world of journalism, and specifically management, because while Reacher started his career as a man of high principles and patriotic duty, he’s given up on authority.

Burned by betrayal and thrown under the bus by one administration after another, he now acts alone without a single string holding him to the world of humanity: no friends, no family, no fixed address.

The only person he has a continuing conversation with is Major Turner (Cobie Smulders), an officer who plays by the book but has no problem telling Jack about the cases she can’t crack in house. Together, they solve problems that elude traditional solutions – such as sheriffs involved in sex slavery and massive amounts of government money that’s gone missing in the Middle East.

She’s Charlie. He’s the Angel. And we’re happily entertained by scenes that involve Jack Reacher telling the future and uttering lines like “in two minutes the phone will ring…”

It’s Jack’s ability to cut ego off at the base and shove it down the throat of his enemies that makes him lovable as a pit bull for the disenfranchised. But his rage is also a little unsettling.

He doesn’t hesitate when it comes to pulling the trigger. He’ll offer his victims gratuitous ventilation with a few too many bullet holes, and he’s likely to offer an empty but witty catchphrase after unloading the clip of an assault weapon.

There’s something mechanical and inhuman about him, but that’s good news for Cruise—an actor who traditionally wavered between boyish romantic lead and all-American action hero, two types that didn’t necessarily need real heart because they’re the kind of characters that auto-fill all the required fields.

Reacher’s removal from the world allows Cruise the opportunity to approach empathy from the other side of the room, entering as a cold killer and exiting the frame as a nurturing caregiver.

Following in the same fatherly footsteps as Liam Neeson’s Taken franchise, Reacher learns he may have a teenage daughter. He also learns his one and only friend, Turner, has been arrested for suspected acts of treason.

Without getting into the stickier and frequently nonsensical parts of the narrative, Reacher has to save Turner, the girl, and possibly the United States of America without any backup.

It’s a losing cause, so they say, but director Edward Zwick (Glory, Legends of the Fall, Defiance, The Siege) keeps us interested by making Jack aware of the long odds. This is a guy who shows his frustration, at one point telling the kid that her self-defense moves were pathetic, and “we’re dead already.”

That type of untempered nihilism is not part of the traditional Hollywood hero package. It’s too hopeless, yet it’s really the only thing that separates Reacher from Mission: Impossible’s Ethan Hunt or the guy fighting aliens in War of the Worlds or Edge of Tomorrow.

Reacher’s edges fit the Tom Cruise mold, but just to make sure he’s not too cold, Reacher shows just enough paternal instinct and broad-shouldered manliness to sell the softer scenes, which Zwick doesn’t spend tons of time on, but he doesn’t sell them out, either – unless you count the inexplicable shots of Smulders lounging around the hotel room in a brassiere.

Like just about everything in Tom Cruise’s walk-in-closet of credits, Jack Reacher Never Go Back is a slick piece of mechanics and engineering, a Swiss timepiece of a film that uses high quality parts and precision movements. You might not like the brand, but you have to admit the line has a distinct look and a seductive style that makes it hard to resist, especially when so little else in the market feels reliable.

Tom Cruise reprises his role as Jack Reacher, a former military cop with many axes to grind. Now beholden to no one, Jack is forced back into the game to rescue a colleague unjustly framed by morally bankrupt government officials. Like all Cruise movies, it's more a function of Cruise's brand than a movie in its own right. You can always feel an agenda concealed somewhere in the handsome clockwork. - Katherine Monk

No Replies to "Tom Cruise on tiptoe as Jack Reacher"