The Accountant keeps it in the black

Ben Affleck finally finds the role he was born to play: An autistic savant who can execute both foes and a forensic audit with emotional cool and professional reserve 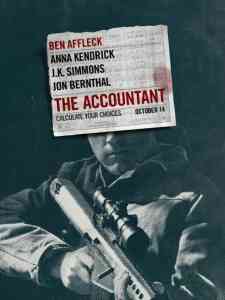 But Ben Affleck as an autistic savant plagued by homicidal tendencies not only works a wicked magic, it feels like the franchise character the lumbering Beantowner was born to play – if only because he’s emotionally inaccessible.

I’ve always found Affleck to have a slightly numbing screen presence – a whiff of cinematic ether that either puts me to sleep, or prompts a drooling state of pleasant semi-consciousness.

Sure. He’s tall and handsome, but he feels as warm and welcoming as a slab of concrete – which is exactly what the central character needed to be in order to make The Accountant work.

A suitable reflection of our current obsession with money and regulatory duty, title character Christian Wolff (Affleck) is the perfect embodiment of the contemporary vigilante.

Born with a developmental challenge, Christian can solve complicated puzzles with his incredible brainpower, but he has no real understanding of emotions. He needs a basic diagram to separate a smile from a frown.

For his mother, father and brother, Christian’s condition is a constant source of stress that eventually causes the nuclear unit to meltdown, but Christian’s military dad uses the separation as an opportunity to take full control of his son’s training and essentially forces Christian to become a malleable commando with an excellent talent for forensic audits.

By day, he’s a balanced ledger. By night, he’s a high-risk investment service capable of eliminating human liabilities without blinking.

The idea of an avenging angel of a number cruncher who worships mathematicians would have been interesting even before Donald Trump’s troubling tax record, but now that taxes and personal responsibility have registered on the public radar, Christian Wolff’s empathy level couldn’t be higher – even if he feels as human as an egg timer.

Assigned to investigate various forms of corporate fraud by an unseen woman with a British accent, Chris has used his talents to keep executives honest and publicly traded companies accountable. He even has a murky relationship with an agent at the Treasury (J.K Simmons), but our titular accountant operates off the books, which means Gavin O’Connor’s movie can dip in and out of the narrative shadows, building suspense with every clouded scrap of narrative.

It’s a rich mix of genre thriller and action movie, but thanks to Simmons, co-star Anna Kendrick and Affleck’s somnambulance, The Accountant also finds hints of deadpan comedy and social satire.

After all, there’s a delicious paradox that sits at the very centre of the film given accountants are considered the movie world’s version of melba toast and this outing offers us a balance-sheet savvy James Bond.

Kendrick plays a bookish love interest to great effect, Cynthia Addai-Robinson adds some sexy edge, but the real reason why this movie works as well as it does is Affleck.

Big Ben is the big brick. The people around him are the vandals, the rebels and the righteous revolutionaries who pick him up and hurl him through plate glass. He’s used as a tool for justice, and as a metaphor of modern morality, but he lacks a sense of sentient free will, acting more like an abacus with muscles than a man.

Affleck’s square jaw, small eyes and bleached paper complexion are the perfect packaging for this modern-day superhero, and director Gavin O’Connor (Warrior) creates a fun comic book backdrop for the action with a white board and a clip of mechanical pencils.

The drama doesn’t always make sense from a psychological perspective, and the medical side of the story needs a little work. But overall, The Accountant reconciles a financially reckless zeitgeist with our current addiction for violent action, resulting in an entertaining write-off that could very well carry over for years to come.

Ben Affleck finds the role he was born to play as an autistic savant with a talent for balancing the books as well as the scales of moral justice. Director Gavin O'Connor makes the most of the big banks and publicly listed bogeymen as enemies, allowing our avenging beancounter ample heroic opportunity. Think Dexter with ledgers. -- Katherine Monk

No Replies to "The Accountant keeps it in the black"