Launching a Rocket in the Living Room

A New Year’s resolution to reuse, recycle or purge was already in progress, then the pandemic happened, and what started as a creative bid to turn garbage into art suddenly morphed into a personal Apollo XIII mission: Without access to Home Depot, can you find a way to repurpose what you already have?

VANCOUVER — The mission started in the rainy days of early January, partly as an unspoken  resolution to make my life and house less cluttered. Another part of it was a desire to address the overwhelming plastics dilemma. While many resins can be recycled and kept from landfill, a lot cannot — meaning any serious attempt at a de-clutter would mean filling the trash can. And like most too-smug Vancouverites, I take pride in producing no more than one small bag every two weeks.

Yet, more than that, I think it was a challenge to my subconscious. You see, I hold on to things because, like many a hoarder, I believe they may be useful down the road.

“I will make something with that,” I tell myself as I put old light fixtures, broken appliances with cool plastic domes, and random bits of metal into boxes. Often, I can even imagine what I will make with the given object that has suddenly become useless, but remains oddly aesthetic.

“I will make something with that,” I tell myself as I put old light fixtures, broken appliances with cool plastic domes, and random bits of metal into boxes.

It’s the same reason why I have a habit of buying open, un-made scale models and big jigsaw puzzles at yard sales. I know pieces will no doubt be missing, but for a dollar… “It’s worth it just for the cool retro design of the box,” I tell myself. “It reminds me of my ‘70s childhood sitting in the sunroom inhaling Testers plastic cement.”

I have tons of reasons for my warehouse o’crap. But a certain fatigue sets in after a while, and the pretty packaging that once sparked joy becomes something taking up space in the garage. So, it was a sense of impatience that prompted me to pull out the scale model of a Saturn V rocket. A yard-sale find, the box had been sitting in a neighbour’s basement for a decade or two — completely unassembled, but open, and containing plenty of loose pieces. The colours on the box hadn’t faded, and the artwork — a painter’s rendition of the vehicle in space, as the booster stages separate — is all nostalgia, a nod to when commercial artists with paints and brushes (not Adobe pro tools) created the ambient art gallery that surrounds us on store shelves.

I have tons of reasons for my warehouse o’crap. But a certain fatigue sets in after a while, and the pretty packaging that once sparked joy becomes something taking up space in the garage.

I opened the box and took out the uncut racks, surveyed the loose parts. Landfill, I thought. As I found the instructions, I remembered the last model I built. Or started to build. That’s what happens to a lot of model builders at a certain age: We lose interest, or it gets too dull, or you bought a model that was just too finicky to finish. Or, you turned 14 and figured it might not be cool to keep sitting in the sunroom making models and inhaling Testers all summer.

I was heartened to see that most of the important pieces seemed to be there: The half-pipes of each stage were obvious, the engines too. I even found a teeny tiny capsule, pieces of the landing module and the all-important decals. I did a loose assembly before committing to glue, and painted all the parts — thinking I may want to modify the pieces to accommodate wiring, or some other kind of hardware. I thought I could turn it into a light.

I foolishly used spray paint, butchered the paint job, and painted over. The black and white checkered pattern, used by the earliest German rocket scientists to see if the vehicle rolled on its trajectory, presented a big problem. Making matters worse, I discovered I was missing a piece that didn’t seem so important — but proved, in a way, life-altering. The skirt fairing assembly that holds the hatch doors, allowing them to fan out and release the LEM, was missing. It was just a two-inch plastic ring, but it had to have a conical shape, tapering slightly at the top.

Suddenly, the lid of every shampoo and juice bottle became a candidate, and before long, everything in my house started to look like part of a rocket. I flashed on my favourite scene from Apollo XIII, the Tom Hanks movie about the real life mission that proved “a successful failure.” It’s the scene where the engineers are tasked with creating an oxygen scrubber from miscellaneous parts already on the craft. A bunch of guys in white shirts and ties start playing with what looks like generic junk from a kitchen drawer: Duct tape, plastic wrap, scraps of fabric, wire….

If they could make the things they needed to survive on-board their craft, then I would look to my little house as my lifeboat. Not just for the rocket, but as a life project. Can I prove my exes wrong and turn this shit into something useful or aesthetic? Can I transform items destined for landfill into an object I want to show in my own home? To be honest, this was before COVID-19 forced us to shelter in place, so when I was at a party in early January, and talked about my great ambitions of fusing garbage and art to make “GART,” I got a lot of “interesting” and “good luck with that,” and found myself infused with doubt.

“Oh well. At least I’m having fun,” I told myself as I applied copper and silver nail polish to the engine assembly. They looked so metallic, so shiny, so convincing, I thought: “Wouldn’t it be cool if I could find a way to make them smoke?”

I scanned the living room, saw the new scent diffuser, and remembered the old broken one gathering dust in one of my boxes. Scavenging the AC adapter from the new one, I turned it on, watched the mist appear from the transparent top, and held the whole booster assembly and engines an inch above. 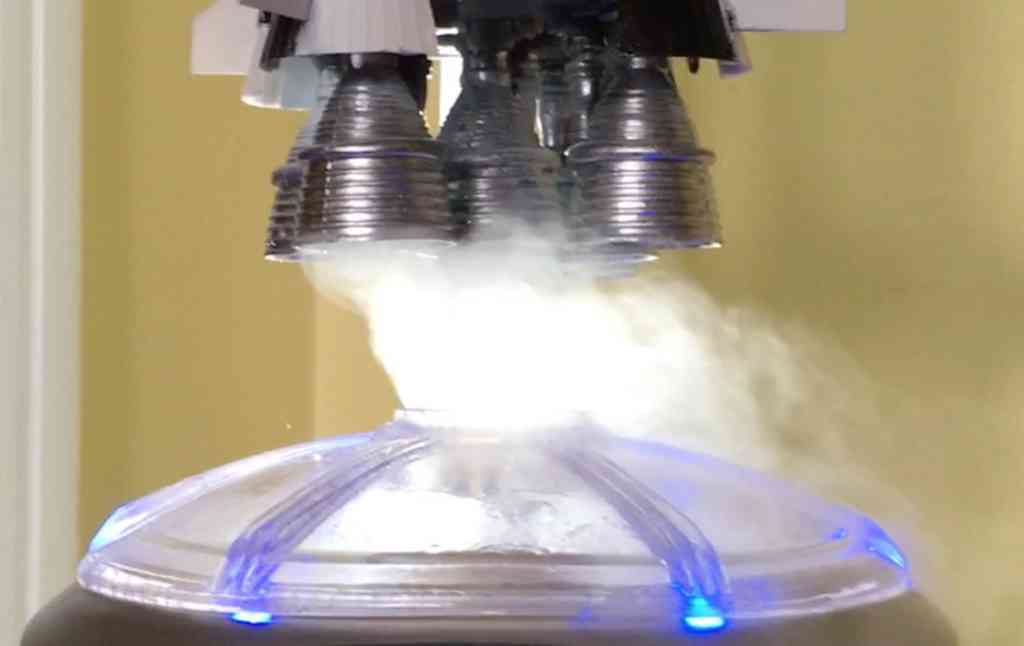 Pure giddiness. So cool. Now, it was just a question of finishing the rocket, creating an external tower to hold it and finding a way to integrate the whole piece — without actually compromising the toy element (because what if I wanted to be able to remove the Saturn V and play with it?).

I’m in love with the thing I made. I surge with happiness when I turn it on and fill it up with something that smells sweet. More than anything, I like looking at it. When the mist really gets going, it’s like T-minus five seconds forever — in that gentle moment before the orange thunder, when it seems as though the rocket will rise into the skies in an elevator cloud.

Yet, I’m only writing about it now because somewhere along the voyage, I turned inward. I mean, I love my rocket — but it’s rough. The paint job is lumpy and sloppy, and the curtain hardware isn’t exactly gorgeous. Also, my plywood base on cabinet knobs looks asymmetrical, and the IKEA microwave covers are identifiable as such.

But in the months since its completion, I’ve not only forgiven myself for its amateur appearance, I’ve completed things that have given me just as much pleasure — while saving other non-recyclable plastic resins from landfill.

…in the months since its completion, I’ve not only forgiven myself for its amateur appearance…

I also watched another rocket lift-off into the heavens, and felt the same surge of space-geek inspiration when SpaceX sent “Bob and Doug” into orbit. They decided to dub the capsule Endeavour, after the last Space Shuttle, and the spirit of manned space flight. Yet, it seemed to land in my own backyard — almost literally — when my friend reminded me of the original Endeavour, helmed by Captain James Cook, the white man credited with discovering the body of water that laps at my doorstep on a ship called Resolution. And since that’s where I started, it’s also where I will finish, at least for today.

Hit the YouTube arrow and watch the model steam away, a launch in the living room. Stay tuned for more Apollo XIII creations to come. Pictured above: Monogram box for Saturn V scale model.

1 Reply to "Launching a Rocket in the Living Room"