When you’re a senior tourist, it’s not easy to travel and often harder to trust, but there’s safety in a group — and often a police escort — through streets where pickpockets prey upon open backpacks and dangling cameras.

PUERTO DE LA CRUZ, Tenerife — Did you ever notice that you can’t trust anyone when you travel? The other day, for instance, someone saw a bunch of canaries singing in a tree. All the guidebooks had told us the islands are named after dogs, not canaries, so this seemed like quite a coincidence! Although, we did have our suspicions. The only dogs we’ve seen are those little shih tzus and Yorkshire terriers, which don’t seem imposing enough to name a bunch of islands after. The canaries weren’t exactly condors either, of course, but they made more sense.

The other day, for instance, someone saw a bunch of canaries singing in a tree. All the guidebooks had told us the islands are named after dogs, not canaries, so this seemed like quite a coincidence! Although, we did have our suspicions.

Such are the thoughts that engage the under-utilized mind after two weeks at the Western edge of the Atlantic Ocean. You can spend the days walking along the Puerto coastline — the waves crashing against the rocks beside you — or through the pristine cobbled alleyways of the old city, past dozens of restaurants and shoe stores, although you don’t walk past many of those. There are also bus tours along the impressively maintained highways — no potholes here — that ring the coast and climb through hairpin turns into the mountains in the middle. There’s barely room for a small European car, but the drivers don’t seem too surprised by a full-sized tour bus coming the other way. They just back up and let the bus squeeze around the next treacherous curve while you look out the window at the rocks and pounding surf thousands of metres below.

In this manner we visited La Laguna, the old capital (it’s since moved to Santa Cruz), at the western side of Tenerife, which is shaped like a duck with Laguna near its head and Carachico near, um, the other end. La Laguna is a United Nations heritage site because it’s so beautifully preserved: a grid of streets hemmed in by buildings that turn the city centre into a maze until you arrive at the big open plaza beside the main market. This is a good place to buy cheese, wine and those big fish with the heads still attached. Like most tourists, I don’t like fish that look, smell or taste like fish, but Canarians have no such scruples.

La Laguna is a United Nations heritage site because it’s so beautifully preserved: a grid of streets hemmed in by buildings that turn the city centre into a maze until you arrive at the big open plaza beside the main market. This is a good place to buy cheese, wine and those big fish with the heads still attached.

Withal, it’s a lovely place, the visit only slightly coloured by the fact that our group of 40 or so senior citizens were accompanied down the main alleyway by two local policemen who were apparently concerned for our welfare. Seniors — with their hats and their backpacks and their cameras hanging from their necks — attract pickpockets the way Spanish shoe stores attract Canadians. Indeed, after a hair-raising ride through the Mountains of Laurel, along so many switchbacks that you think you might be going home before you get there, we arrived in the little fishing village of Los Roques. There our friend Stan saw a woman reaching inside his wife Betty’s backpack. He scared her off, but she and her male companion followed our bus all the way to our next location, the public beach at Santa Cruz, which was almost an hour away. There they strolled beside the sand, eyeing backpacks hungrily. 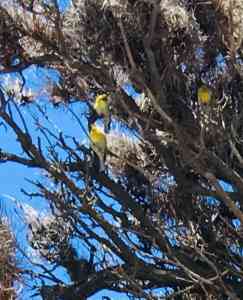 Tweeting the Truth: Canaries on the Canary Islands make an impression, even if they aren’t the islands’ namesake. Sandy Stone photo.

A few days later we had yet another bus tour, this one through the pine forest up to Teide, the volcano that dominates the island. It’s the third-largest volcano in the world, which is almost impressive, and just one of 250 volcanoes on Tenerife. Our guide assured us they only erupt every 40 years or so (the last time was in 2011), so you feel relatively safe until you remember that he also told us the dog story.

The national park around Teide is a moonscape of sand and or lava pillars; it looks like a John Ford Western is about to break out. The sky was an incandescent blue the day we got there and you could look down on the clouds that lightly covered Puerto de la Cruz. Then we got back on the bus and drove down to a restaurant on the mountain road that had a very large gift shop.

Other things to do include sitting around the pool, or going for long walks — the north coast has many hiking trails — or getting involved in a peripheral way with the social life of the hotel. One of our seniors said something about sitting with riff-raff somewhere, and so she has become Riff-Raff Lady, her pronouncements monitored for similar hints of outrage. The other day, two of our friends got onto an elevator with a young, strikingly pretty woman who was so voluptuous that her male companion was holding onto her tightly, as if, in her pneumatic way, she might float away like one of the para-gliders who drift disconcertingly past the hotel balconies.

She became Voluptuous Woman, and it was easy to track her progress: she arrived in the hotel’s all-you-can eat buffet restaurant in a low-cut cocktail dress and high heels, a marked departure from the usual outfit of the senior tourists who are dressed mostly in quick-dry adventure wear. They look like they are equipped for a weeklong safari up the Amazon. Voluptuous Woman, on the other hand, looks like she’s about to open for Sammy at the Sands. Sightings are marked by significant glances among our small group.

There are many deeper dramas as well. Judith and Robert were on their balcony when they saw a helicopter drop a line into the ocean and rescue two people who were treading water. We never learned why, or what happened to them: holiday dramas are like those sophisticated open-ended short stories where you have to fill in the details yourself. I happened to be reading a book of such stories of love and loss — Midsummer Night in the Workhouse by the late Diana Athill, whom I recommend unreservedly — when I had a small drama of my own.

…Holiday dramas are like those sophisticated open-ended short stories where you have to fill in the details yourself.

I was coming out of my room on the fourth floor when I saw an old man standing down the corridor looking at me. In a soft English accent, he said something that sounded like, “Eric?” I said no, I wasn’t Eric, and when I got closer I saw he seemed to be in some distress. He was thin and about 80, and his pants were done up in a strange way, with his belt all askew. His feet were bare….

“This is the fourth floor,” I told him. “Who are you looking for?” He said something about all the halls looking the same and he handed me a piece of paper on which someone had written a number of a room on a different floor, and his name, which we’ll call Mr. X. I realized he was lost, or had dementia, and so I told him I would take him back to his room. He could barely walk — there was something wrong with his legs as well — and he couldn’t hear very well because he forgot his hearing aids. We went to the his floor and I took him down the hall. “Do you have a key?,” I asked him, but he didn’t hear me. When we got to his room the door was open and a TV was on. “Is this your room?,” I asked, and he said, “The TV is in English.” I knocked on the door but there was no one there, so I took him in. I had an odd feeling of danger. I told him to sit on the bed and I would get help. I probably should have just called the front desk from his phone, but I was uncomfortable in his room.

I went to the lobby and started to explain to the desk clerk what was going on when a tall Englishwoman came over. I guess she had overheard me. “Have you found my husband?,” she asked. I said I found a man wandering around the fourth floor and took him back to his room. She said she’d go right down. “Is he all right?,” the desk clerk asked and Mrs. X said, “I’m not sure. Probably not.”

At dinner that night, my friends speculated about what might have happened: a couple returning to an old holiday spot in the hopes that the memories would jolt the husband out of his dementia? A last holiday before the clouds closed in completely? I didn’t want to ask the hotel people about him because it seemed too personal: it was bad enough that I had been in his room and had sat him on his bed in his bare feet.

But a few days later I saw him at breakfast with his wife. He was walking much better, although he still had a vague look of bemusement. I watched from a few tables away — neither of them seemed to recognize me, or at least they didn’t acknowledge me — and I saw how she sat looking out of the window, watching the ocean breaking against the rocks, while he got up alone several times to help himself to more food. They didn’t seem to be talking to one another very much. I left as soon as I could. It was cloudy and windy, which is unusual – the weather has been spectacular – and I couldn’t warm up all day. 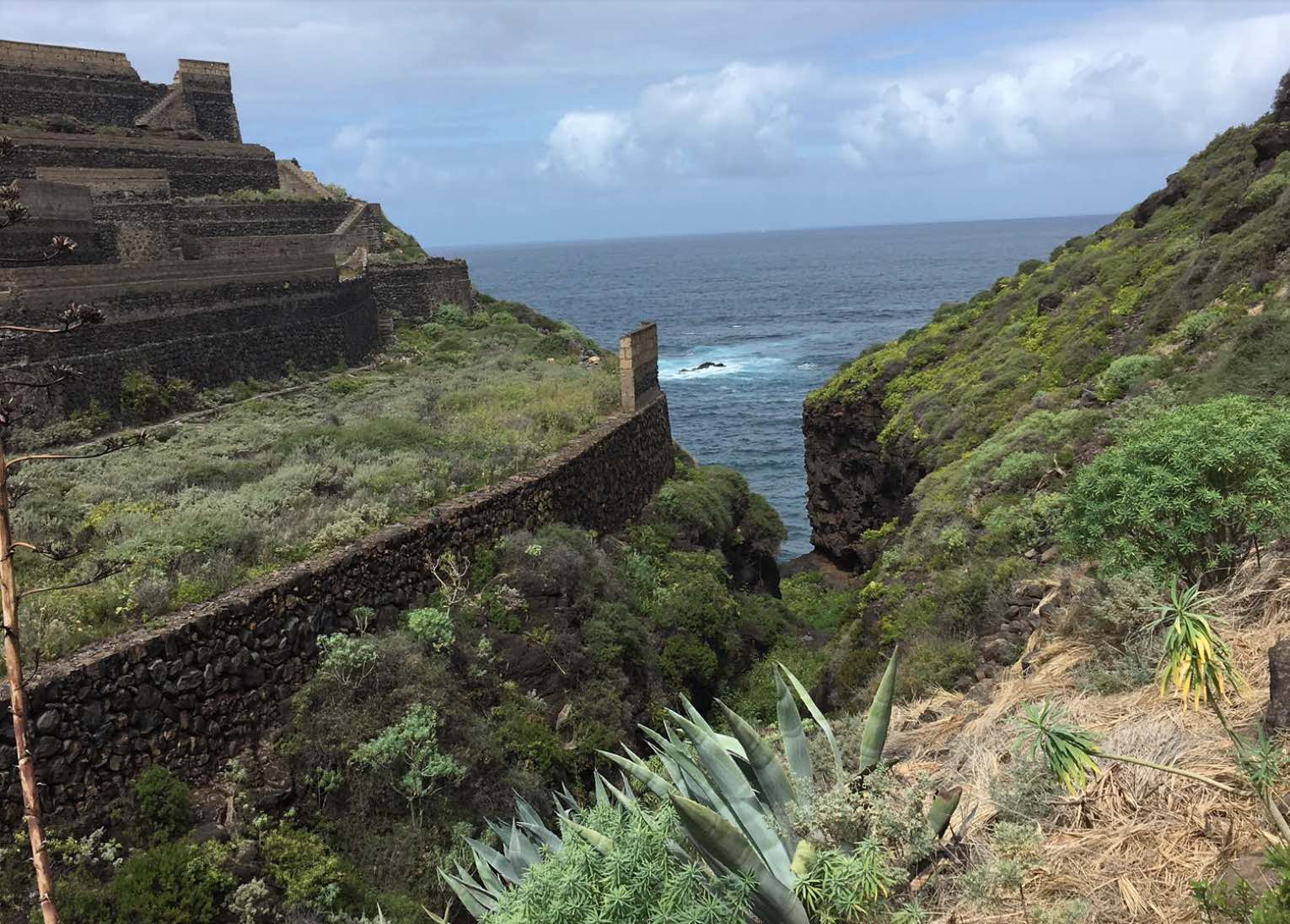 The gorge on the way to Playa de Bullollo: Travelling to the Canary Islands involves vertical.