You may have missed it, but the land of my ancestors recently celebrated it’s centennial. On Dec. 6, 1917, small but mighty Finland officially severed itself from Russia, becoming an independent country for the first time. Russia’s new Bolshevik rulers did not protest. I remember leafing through one of my great aunt’s photo albums and seeing a grainy picture of the raising of the Finnish flag in their small community for the first time. A bit more than two and a half years after independence, my mother was born in the fishing/farming village of Sideby. When I first visited “the relatives” in the winter of 1971, I was given the very room where her birth took place. Under the mountain of blankets my two great aunts supplied, I remember going to sleep that night looking at the same walls that oversaw my mother’s first breath of life and pondering the chains of existence. Because my great-grandfather August Jossfok, a rough-looking, bearded fellow in big boots, and a young woman down the road, Ida Mathilda Karlsdottor, found favour with each other 130 years ago, I am here today. (My grandmother’s family was from the small farming community of Karperö, further north.)

My mother’s family are Swede-Finns, part of the predominantly Swedish-speaking communities that line the Gulf of Bothnia, left over from the several hundred years when Finland was part of imperial Sweden. In the old days, Swede-Finns spoke only Swedish. When the family left for Canada in 1928, my mother didn’t know a word of Finnish. Few outside Finland realize that the country remains officially bilingual, although mixed-marriages and migration to Sweden have reduced those for whom Swedish is their first language to barely 6 percent of the population.

In fact, there is probably much else people don’t know about Finland, besides saunas, Sibelius (a Swede-Finn, incidentally), the prowess of its hockey players and its remarkable education system, which consistently produces student results among the best in the world. Herewith, in honour of Finland’s 100th birthday, are a dozen things you might like to know about a country that has punched above its weight for a long time, and continues to march to its own drummer. (Even before independence, Finland had been the first jurisdiction in Europe to give women the right to vote, in 1906–10 years before good old Canada.) First, some history.

Thousands of “Red Finns” left their divided homeland, now in the hands of the vengeful Whites, and emigrated to Canada. Many found work in the logging camps and mines of northern Ontario. The new arrivals did not leave their politics behind. A number became political activists and radical union organizers.

The fierce polarized politics of early Finland were frightful. Immediately after independence, conservative Whites and socialist Reds duked it out for ascendancy, resulting in a short, brutal civil war that claimed 36,000 lives in a country of just three million people. With the critical assistance of several thousand German troops, the Whites were victorious.

The bitterness of the civil war had a tangible impact on far-away Canada. Thousands of “Red Finns” left their divided homeland, now in the hands of the vengeful Whites, and emigrated to Canada. Many found work in the logging camps and mines of northern Ontario. The new arrivals did not leave their politics behind. A number became political activists and radical union organizers. In 1929, Janne Voutilainen and Viljo Rosvall “drowned” while trying to organize some nearby loggers. Most believe they were murdered by anti-union thugs. Their funeral was the largest ever held in Thunder Bay, which retains a Finnish flavor even today, most notably with the venerable, 100-year old Hoito restaurant, still on the bottom floor of the Finnish Labour Temple. My grandfather was also among the “Red Finn” contingent, but thankfully, he brought his family to Vancouver.

Shredding the neo-con argument that taxes and government get in the way of economic development, Finland’s per-capita income has more than held its own among other Western industrialized countries.

In World War II, Finland was an ally of Germany. Hitler made a brief visit in 1942 to wish the country’s military leader, Carl Gustaf Mannerheim, a happy 75th birthday. The previous year Finnish forces had attacked the Soviet Union to regain territory lost to the USSR during the Winter War. After some initial success, the venture ended disastrously. After the war, the Soviets exacted heavy reparations, claimed a chunk of border territory, and took jurisdiction over a strategic peninsula not that far from Helsingfors (as Swede-Finns call the capital) until 1956. Finland was also required to remain “neutral” in world affairs, a position they scrupulously maintained until the collapse of the Soviet Union.

During the post-war years, Finland established one of the most extensive state social services systems in the world, believing, along with other Nordic countries, that governments have a duty to intervene on behalf of their citizens. Shredding the neo-con argument that taxes and government get in the way of economic development, Finland’s per-capita income has more than held its own among other Western industrialized countries. In 2016, the World Economic Forum ranked tiny Finland first in terms of World Human Capital. Other international reports found Finland the most stable country in the world from 2011-2016, and second best in terms of the gender gap. As baseball broadcaster Mel Allen used to say: “How about that?!”

In 1929, Janne Voutilainen and Viljo Rosvall “drowned” while trying to organize some nearby loggers. Most believe they were murdered by anti-union thugs. Their funeral was the largest ever held in Thunder Bay, which retains a Finnish flavor even today, most notably with the venerable, 100-year old Hoito restaurant, still on the bottom floor of the Finnish Labour Temple.

Finland has military conscription. All my male cousins, on turning 18, had to interrupt their education to serve at least six months with the Finnish army. Coalition governments are the order of the day. For many years (until 2015), the small Swedish People’s Party (Svenksa Folkpartiet), supported by just about all of my relatives, was part of the government. 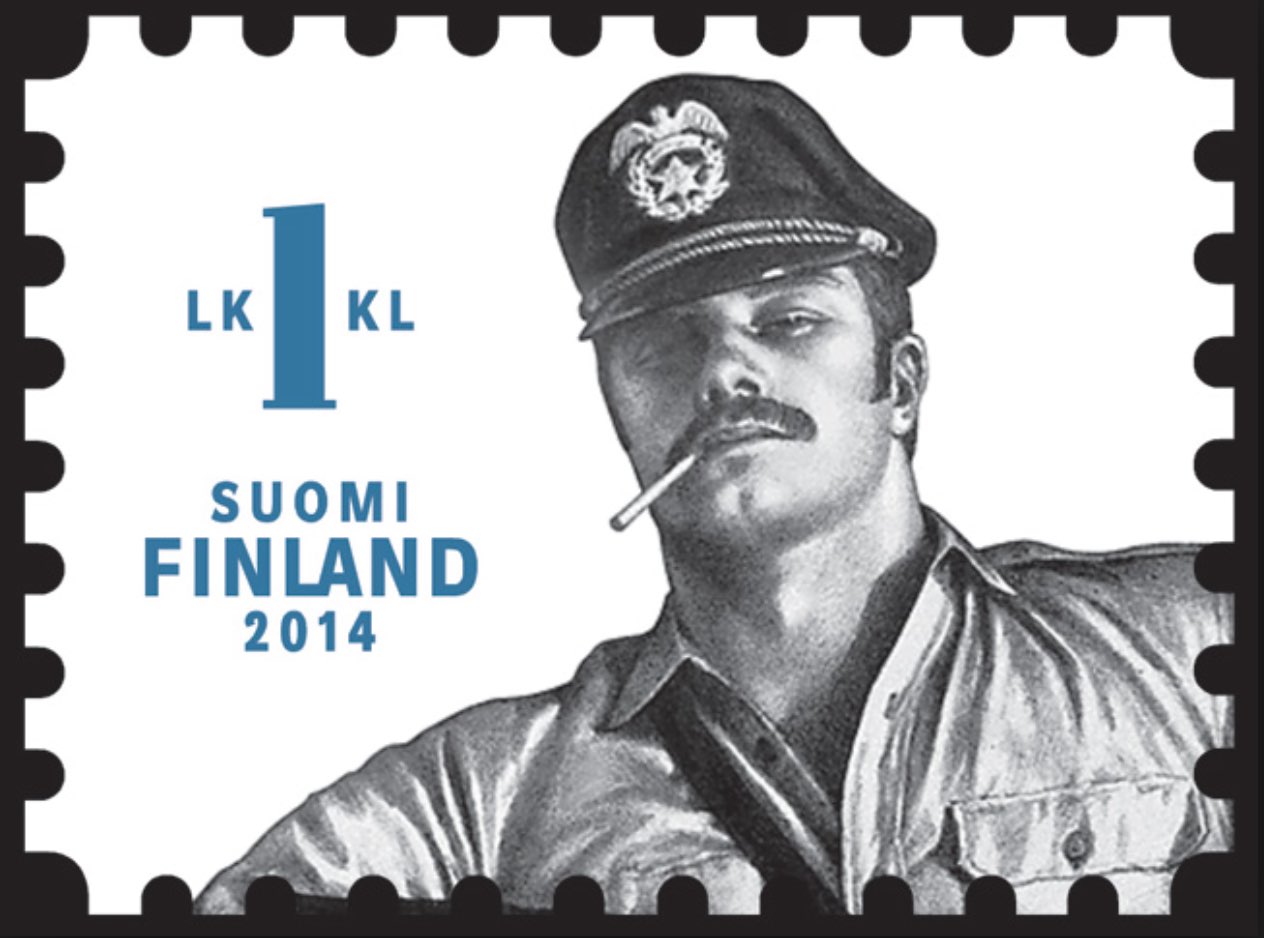 Easy to lick: Touko Laksonen’s stamp features homoerotic artwork that you can stick to any package.

In 2014, Finland became the first, and so far, only country to put homoerotic drawings by a gay artist on its stamps. They were the work of the artist known as Tom of Finland (Touko Lasksonen), subject of a recent bio-pic this year by director Dome Karukoski. (The one above is the mild one.)

Of course, Finland isn’t perfect. Alcoholism remains a big problem, no doubt contributing to the country’s relatively high homicide rate, while youth unemployment is stuck at around 20 per cent. And, as in most European countries, anti-immigration sentiment has become an issue, fueling the growth of a worrisome, nationalist party. The good news, however, is that political leaders banded together in June to freeze out the Finns Party, after it elected a hard-line, anti-immigration leader. Twenty elected members of the party left to help the coalition government maintain its majority. “This decision will likely ruin our political careers, but we are determined to do this,” they said in a statement. “Today, we are not politicians, but we are doing this for the fatherland’s sake.” How rare is that in today’s political world?

In the final of the world hockey championship in 2011, playing against their loathed, arch-rivals, Finland whacked neighbouring Sweden 6-1. It was the greatest triumph in the history of Finnish hockey.

Believe it or not, the national sport of Finland is not hockey, but baseball. However, banish any thought of the North American version of rounders. The Finns call it Pesäpallo, and the rules seem to come from outer space. Would anyone else other than the fun-loving Finns have three designated players on each team called “Jokers”? You think cricket is complicated? It takes this guy more than five minutes to explain all the ins and outs of Pesäpallo. Unlike any sport you’ve ever seen.

Well, maybe not. There’s also the Finns’ fondness for fen football, otherwise known as swamp soccer. The august New York Times had a hard time taking it seriously, headlining their story on the  competitive bog slog: “Finland has a sports screw loose.” This from a country that relishes bowling. But never mind. Read about it here. Try hard not to laugh.

12. Last, but certainly not least: according to the Guinness World Records, the 19-letter Finnish word saippuakivikauppias (a soapstone vendor), is the world’s longest palindromic word in everyday use. That prompted my friend Lorne Slotnick to ponder: “Why would the word for a soapstone vendor be in “everyday use”?” And the answer is: Because it’s Finland!

Happy 100th birthday, land of my mother’s birth, and a Hyvää Joulua to you all.

For more Mickleburgh, you can check out the Ex-Press archives or visit Mickleblog.

Photo above: Bog soccer combines mud wrestling with the beautiful game to create a homely sport.

No Replies to "Discovering a Finnish Beginning"