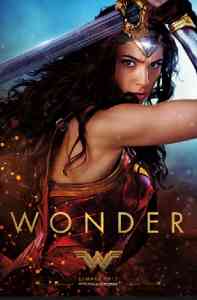 (June 2, 2017) I was waiting for Gadot. Now that she’s arrived, she was all the Gal I could have hoped for. She’s a woman, and she’s a true wonder. It’s all so obvious, they don’t have to speak her name or write it into the origin story. By the time we leave the theatre, it’s a gleaming lasso of truth pulsing around our psyche.

We all know who Wonder Woman is: The first female superhero created by psychologist and comic book writer William Moulton Marston in 1941. She’s part of the DC Comics universe, a founding member of the Cold War-era creation, Justice League, and an Amazonian princess who goes by the name of Diana Prince when she’s among mortals.

Lynda Carter brought her off the comic book page via a TV show (1975-79), leading a parade of other empowered female characters down the middle of Main Street during the upstart ‘70s: Lindsay Wagner was leaping over fences and eavesdropping on criminals in The Bionic Woman (1976-78), and Joanna Cameron was spinning her way through transformations as a science teacher with the powers of an Egyptian goddess in the Saturday morning series with the unfortunate name, The Secrets of Isis (1975-77).

They all had a hand in reshaping pop culture’s treatment of gender roles by showing us women of action, but as feisty and refreshing as these women were, they all lacked a certain physicality on screen. They had skinny little arms, wee waists and often sported platform heels that rendered chase scenes ridiculous.

Gal Gadot actually looks like an Amazon. Standing over five-foot-eight, the Israeli actor and super model exudes an earthy strength as well as an unnatural beauty. She’s the perfect person to play Diana of Themyscira, a precocious young princess with a divine blood line and an undying desire to do good.

Patty Jenkins and the screenwriting team that included Zack Snyder fill in most of the blanks in the backstory. They begin with scenes of Diana’s childhood on the hidden island of Themyscira where she lives in a community of women. Her mother Hippolyta (Connie Nielsen) is queen, her aunt (Robin Wright) is a master warrior, and Diana is desperate to make them all proud by protecting the world from Ares, the angry god of war.

Destiny calls when an American pilot pierces the protective cloud and crashes into the ocean. Diana saves the male mortal named Captain Steve Trevor (Chris Pine), and soon learns about the evils of mankind: A world war rages on the outside. Millions are dying. Diana feels if no one else is going to save the world, she will.

Before long, she and Steve are dashing through the trenches of the First World War, closing in on German baddies Ludendorff (Danny Huston) and Dr. Maru (Elena Anaya). It’s all standard comic book war stuff, but because this is Diana’s first encounter with the world of man, we see it all through a fresh pair of eyes. Most of the humour stems from the wide-eyed dismay we read on Diana’s face, but also from her fundamental innocence and conviction in the truth of ancient myth.

Every time she tells Steve she has to find Ares so she can stop the war and save the world, he looks at her with a slightly condescending smile. Yeah. Ares. Okay. The rest of the fun stuff is pure feminist fantasy, with Diana standing up to turn of the century chauvinism in leather-and-brass accented lingerie.

It doesn’t matter if most of these comic asides come from lobs right down he middle of the plate. Gadot hits every one of them out of the park with her perfectly perky smile, her sympathetic eyes and what can only be described as DC Comics’ earnestness.

Unlike cheeky Marvel Comic characters, DC’s superheroes were straight arrows like Superman. They’re the goody-goody squares of superhero high who stand up for every starchy moral principle, which makes them very, very good. But just a little dull — and more than a little inaccessible.

Gadot’s Diana embodies all the purity the character demanded, but she also pours real passion into every inch of the character’s flesh. This is a woman who never met a man, yet is comfortable with her sexuality. She’s a warrior who loves combat, yet firmly believes in love.

The film world doesn’t usually tolerate such paradoxes within a female form because, well, as Diana would say: It’s the world of man.

Yet, there she is, standing firm, tall and proud — a full-on female superhero who isn’t trying to emulate anything masculine, but embracing all that is feminine and infusing it with mental and physical power.

The emotions are key, because it’s here, in the film’s beating heart that we feel the difference between Wonder Woman and the spandex heap of extraordinary others. Wonder Woman sees our world from an entirely different perspective. She knows what the world of man could be because she lived in the paradise of women. Thanks to Jenkins, Gadot and the rest of the Wonder Woman team, we get a glimpse of that other world, and feel a renewed passion to fight for it.

The long-awaited big screen debut of DC Comics' fair-sex superhero proves inspirational as it forces the viewer to see the world of man from an empowered female perspective. Gal Gadot is perfect as Diana Prince, Amazon princess, believer in love, and saviour of all humankind. The fact that this movie exists makes it a classic upon release. -- Katherine Monk

No Replies to "Waiting for Gadot"