Looking back at the year of ball that was, Rod Mickleburgh finds the big league diamonds were rough, but the minor games at the likes of Nat Bailey Stadium were small gem experiences in a priceless setting.

And so baseball winter has begun, made even harsher by the tragic death of Roy Halladay. The hopeful breezes of spring, the lazy hazy crazy days of summer and the beautifully slanted light of fall have all departed from the diamond, leaving us to bundle up and shiver through the bleak wintry months of no baseball. In that sweet, far-off time when I was a kid, the Series was always over by the second week of October, in time for the players to do their fall hunting. Now, with so many wildcard and playoff games piled on, the Series stretches into November, as ridiculous a month as ever was for the summer game. In November, you don’t think baseball, you think winter.

There was hardly a “wow” ending. The highly-anticipated seventh game of the recent Series was drearier than opening a tin of sardines. To paraphrase noted St. Louis Cardinal fan T.S. “Tommy” Eliot, “This is the way the year ends. Not with a bang but a whimper.” After two dreadful stanzas by Yu “Non-Whirling” Darvish, the Astros were up 5-0. Yet we had to endure seven more innings of tedium in front of an increasingly morose  crowd, before the Dodgers officially surrendered, 5-1, and the Houston Astros, of all teams, were World Series champions.

It was a forlorn anti-climax to a Series that had been such a wonderful reminder of the kind of drama and individual heroics only baseball can deliver. There were spells of off-the-wall craziness never before witnessed on a World Series diamond. So many records were shattered, it felt like Disco Demolition Night at Comiskey Park in 1979.

The Series even started with a record. The thermometer for Game One at Chavez Ravine hit 103 degrees on the fuddy-duddy Fahrenheit scale, nine degrees higher than the previous heat standard (baseball has statistics on everything). Then Dodger leadoff hitter Chris Taylor homered on the very first pitch his team faced. Had that ever happened? Nope. Mind you, there have only been 113 previous World Series.

Game Two was so full of extraordinary happenings it could have been the Trump White House. But in a good way. All told there were eight home runs, including a seemingly impossible five in extra innings. Both were Series firsts, with the added fillip of the Dodgers, down to their last strike in the bottom of the 10th, tying the game on a rare single, struck by a guy who hit .a measly 215 during the year.

The next two games were close, well-played contests, setting the stage for what many have called a World Series game for the ages. When home runs stopped rocketing into the bleachers, when three-run leads on both sides stopped being erased with a swing of the bat, and the last beleaguered pitcher staggered off the mound, the score was 13-12. Someone did one of those momentum charts. It went up and down like a pogo stick. The game lasted five hours and 17 minutes. Something inside me wanted it to go on forever. And after all that slugging, the game ended in the 10th inning with the puniest of baseball rallies: a two-out hit batter, a walk and a single. These few lines simply can’t do justice to the abundance of thrills that took place. But for those who want to read a fulsome write-up of the game, here’s a wild account by my favourite baseball writer these days, Jonah Keri. Even the New Yorker’s Roger Angell, the best chronicler baseball has ever had, roused himself at the age of 97 to write about it.

When the last of the Dodgers fell, befitting the team’s first World Series in its 55-year history, the young Astros naturally went wild. Shortstop Carlos Correa was so pumped, he proposed to his girlfriend right there on the field. Live, on TV. Another Series first!

For Vancouver baseball fans, however, this was old hat. We had our championship moment in the sun weeks ago. For the fourth time in seven years, the hometown Canadians hoisted the highly-esteemed Bob Freitas Trophy, emblematic of baseball supremacy in the Single A Northwest League. We made the Everett Aquasox suck, forced the Tri-City Dust Devils to eat dust, sent the Hillsboro Hops hopping, doused the Salem-Keizer Volcanoes, polished off the Eugene Emeralds, made too much noise for Boise, and forced the Spokane Indians to change their name to the Indigenous People. It may not have been the World Series, but the exuberance and abandon of the young Canadians bouncing up and down on the field and frolicking around their championship trophy matched anything we saw in Los Angeles, albeit minus an engagement ring. 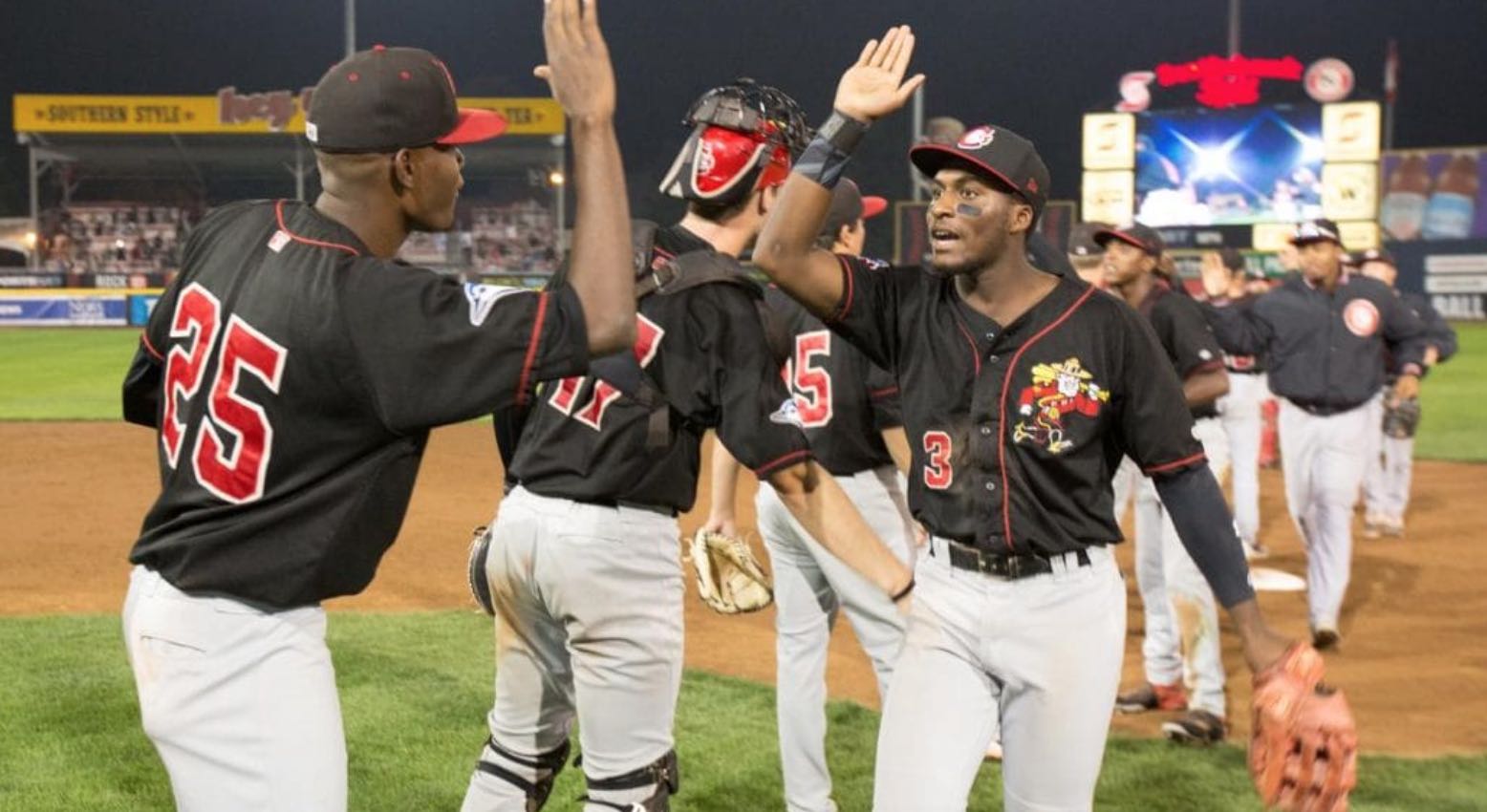 Minor league baseball is so much fun. Yes, Bull Durham had lots of other stuff going for it, but the charm of baseball’s best movie came mostly from its spot-on depiction of baseball in the minors, including the community’s loyal fan base (in the case of Annie Savoy, a bit more than “loyal”…). The movie gets it right. The way Vancouver has fallen in love with venerable Nat Bailey Stadium and its Single A Canadians, even lower on the Blue Jays’ farm team ladder than the Lansing Lugnuts, reminds one that money, hype and saturation, endlessly-analytical coverage aren’t everything in sports. Sometimes there’s just the joy of the game, itself.

I can’t remember having a bad time at Nat Bailey. It’s a place for families and kids, lifelong baseball fans, couples on a date, “bros” who just want to suck back a brew or two in the sun and, well, just about everyone. The entire park is a no-lout zone. This past summer was particularly splendid. Not only did the Canadians qualify for the playoffs before sell-out crowds, they won it all. I took in two of the games, including the one that brought the C’s their league championship in glorious September.

Both were tight, 2-1 victories, but the mood in the stands was anything but tense. During Game One, half a dozen women sitting behind me were having a grand time, chatting away and watching the game, too. (“Can you imagine trying to hit 94 mph?….Their pitcher looks 12….”) When a dude photo-bombed their selfie, they killed themselves laughing. As for my lonely guy self, I was able to muse once again on that baseball imponderable: why are there coaching boxes if the coaches are never in them? I also noticed with delight that a coach for the visitors was a fellow named Turtle Thomas.

The game went into the eighth inning, still scoreless, when the C’s Logan Warmoth, who had only one homer all year and whose older brother is a morning TV news anchor in Florida, unexpectedly lined the ball into the left-field stands for a two-run dinger, and we all went crazy. After a nerve-wracking ninth, the players ran onto the field, celebrating as if this really was the World Series.

The good times continued on the night Vancouver claimed the trophy. Three infectiously happy young Latina women in the next row kept up a steady din of cheering in Spanish, standing up to dance every time there was a hint of music. They really lit up whenever the C’s young Venezuelan third baseman Dieferson Barreto came to bat. “Number 5. He’s the best,” one told me. Sister, friend, partner? Who cares?

You knew it was going to be a special evening when perennial also-ran Wasabi won the Sushi Mascot Race. Once again, Logan Warmoth was the hero. The Canadians had only two hits all night, but Warmoth’s two-run single was one of them, and the home team held on to win. As the final batter went down on strikes, the players hurled their gloves into the air and rushed into each other’s arm. It was a joyous sight. No matter this was Single A, no matter the trophy was named after someone they had never heard of and no matter they were playing for a city in a foreign country with a Queen, the metric system and weird coins called loonies, they could not have been happier. Nor could we in the stands. No one wanted to leave.

For more Mickleburgh, visit Mickleblog or the Ex-Press archive.