McDonald’s latest film features a drug-addicted trumpet player and a jaundiced hitman on a collision course in the middle of Europe. “It’s about the journeyman and the artist,” says the director. He might as well have been talking about McHattie himself — the Canadian character actor who sits at the heart of this “one-man two-hander.”

These are times designed for the lonely drone of a jazz trumpet, are they not?  A single horn breathing brassy notes into the somber stillness. Oh, how it asserts man’s power to inhale all the chaos, and turn it into something half-ordered — a dazzling tumble of notes birthed from pursed lips pushed against hard metal. Oh, ’tis so noir, so archetypal, that the image of the jazz trumpeter has fuelled more than a few big-screen treatments — from Kirk Douglas and Michael Curtiz’s Young Man With a Horn (1950), Denzel Washington and Spike Lee’s Mo’ Better Blues (1990), to Ethan Hawke’s  recent turn as Chet Baker in Robert Budreau’s biopic Born to Be Blue (2015).

Yet, when you hear that Bruce McDonald, Canada’s king of movie mischief and director of seminal indie films such as Roadkill, Highway 61 and Hard Core Logo has taken on the jazz trumpeter trope, the same-old broken-toothed hero seems destined to take on a slightly different tone.

“For me, it’s kind of like the art cockroach that you can’t kill. There’s something repulsive about him. Yet, the fact he survives makes him alluring,” says McDonald, describing what he calls “the trumpet player trope.” And so, meet “Trumpet Player,” as he’s referred to in the credits, or “Maestro,” as he’s referred to in the film. Played by veteran character actor Stephen McHattie in a black suit and white tie, Trumpet Player sits at the heart of Dreamland, McDonald’s latest feature film which makes its COVID-19-era “theatrical debut” Friday via video-on-demand services including Apple TV, Google Play, and more.

For me, it’s kind of like the art cockroach that you can’t kill. There’s something repulsive about him. Yet, the fact he survives makes him alluring…

Forced to play a creepy wedding gig in Belgium for a morally bankrupt cabal of rich people — and a vampire — Trumpet Player is just half the equation. He has a doppelgänger in a hitman named Johnny Dead Eyes who’s been hired to cut off Trumpet Player’s pinky. So begins what McDonald himself calls “a weird movie” — and what I would call a sidewalk slalom crashing the gates of genre, while drunkenly flirting with auteur cinema.

Penned by Tony Burgess and Patrick Whistler, the seeds of Dreamland started over a decade ago, when McDonald was shooting his lauded indie feature, Pontypool, with Burgess and McHattie. At the end of the credits, they included a scene with McHattie and his co-star and real-life wife, Lisa Houle.

“It was for those kinds of people who like to stay to the very end of the credits,” says McDonald, speaking from his home in Toronto earlier this week. “It’s the two of them sitting in a sushi bar and talking to each other … it was crazy. It didn’t make sense. But it was like a virus… it kept at me. The producers didn’t want it as the ending, it was too weird, so we put it at the very end of the credits — for the people who like to watch the words scroll.”

McDonald says he drifted into other work — mostly TV series — for the next few years. Meanwhile, the script for Dreamland was taking shape, and when a Belgian producer read the neo-noir story that fuses science-fiction and horror fantasy into a horn-blowing bundle, he, the cast and the crew were off to Bene-Lux.

Thanks to the advent of downloadable video cloning tools, both Johnny Dead Eyes and Trumpet Player are played by McHattie. Joining him in the frame are a clutch of McDonald favourites, including the return of Houle, as well as Juliette Lewis (Claire’s Knee), and Henry Rollins, who plays a crime lord named Hercules. 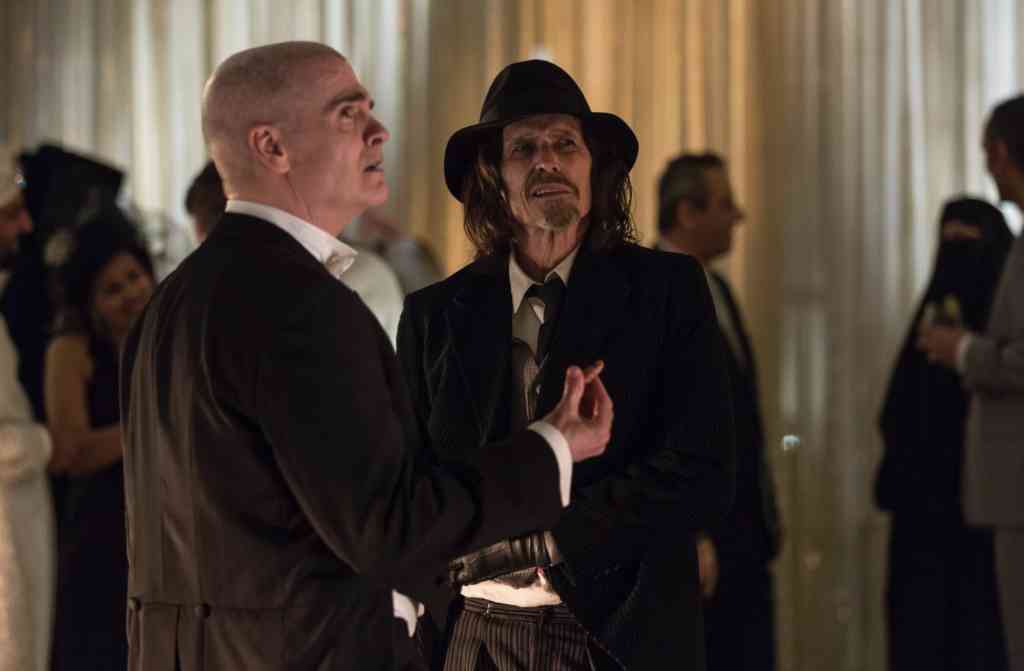 Henry Rollins (left) as Hercules and Stephen McHattie as Johnny DeadEyes in Dreamland.

“I was a little scared to meet him,” says McDonald of Rollins, the former Black Flag punk rocker known for loud, shirtless shows with churning mosh pits of young men. “But he was game to do it. And when I thought of Henry for Hercules, it was like, fuck yeah.”

Yet, while Rollins and Lewis may have the bigger names, it’s McHattie who clearly has the biggest part. “This is a one-man two-hander,” says McDonald. “It’s the Side A and Side B. Johnny Dead Eyes has this respect for the trumpet player — it’s like the journeyman and the artist.”

The minute the words leave McDonald’s mouth, it feels like he’s described McHattie’s entire career. A working actor with a list of credits that includes small bits in big movies such as 300 and Watchmen, the Antigonish-born player has crafted a character niche that keeps him busy all year. But until Pontypool, and domestic successes such as The Rocket, McHattie’s name was in smaller type.

McDonald saw Dreamland as a chance to make it bold. “It’s all the little things he does that surprise you,” says the director. “Stephen understands how important they are. But that’s just part of what he brings. He is always prepared and he’s always ready to play. He plays tough guys a lot, but he can do anything. He’s always exploring.”

Taking his cues for Johnny Dead Eyes from the likes of Robert Mitchum, McHattie finds the leaden Weltschmerz in the heart of the hired killer. But in the very same breath, he’s using another part of his skill set to take flight as the inspired trumpeter embracing his swan song.

“Stephen really is a journeyman actor. He’s done so much. And he can still do more. So your observation is a good one — he is like the journeyman and the artist. That’s him. Yet, even on the dodgy shows — and we’ve both been on a few — he’s always the consummate actor. So for me, the minute I cast Stephen, I don’t have to do much. He does all the work.”

McDonald has similarly glowing things to say about the rest of the cast, which includes a large contingent of young Belgian girls: would-be victims of the vampire child sex ring. It’s another part of the genre mashup at work, or what McDonald describes as a “Euro-trash jazz western.” I ask McDonald about the ‘grown men saving little girls’ motif — and why it’s so attractive to men. I rattle off titles such as Transporter and Taxi Driver, and within seconds, McDonald is on the same page citing scenes from the Liam Neeson franchise Taken.

“Yeah, the grown man saving the little girl … it’s fairy tale stuff,” he says. “It’s weird, too, because when we got to Belgium and started shooting, child sex rings were all over the news. But there is something to the Travis Bickle idea here. He’s trying to save her. But when I was preparing for this, I was really reading stuff like Raymond Chandler and William Burroughs, and a writer named Jim Carroll who wrote the Basketball Diaries.”

I ask McDonald about the ‘grown men saving little girls’ motif — and why it’s so attractive to men. I rattle off titles such as Transporter and Taxi Driver, and within seconds, McDonald is on the same page citing scenes from the Liam Neeson franchise Taken. “Yeah, the grown man saving the little girl … it’s fairy tale stuff…”

Addled addicts, broken-toothed trumpeters, heroin-laced poets and alcoholic artists inform the material from every aspect — with Chet Baker’s ghost whispering the melody. What is it about Baker, specifically, that makes him the ever-romantic anti-hero? “Was it because he was beautiful?” I ask.

“He was beautiful,” says McDonald. “But this isn’t the beautiful Chet. We’re on the other side of that -when he was old, gnarly, broken. When he was the art cockroach that wouldn’t die.”

Creativity demands persistence to succeed, so I guess it’s no wonder why art cockroaches inspire a sense of awe. They persist, and in doing so, embody a knotty sense of resistance — of a different way of existing — and in these Pandemic days, that not only feels more relevant, it also feels more heroic.

McDonald says he’s been taking the whole COVID-19 quarantine in stride. Before he picked up the phone, he just walked in the door. He was teaching his daughter to drive. The vast selection of empty parking lots, he says, is a dream for those just learning the ways of pedals and parallel parking.

“I’ve also been reading Joe Eszterhas — the guy who wrote Basic Instinct and Jagged Edge (and Showgirls). It’s all about Hollywood… kind of trashy. But it sees the Hollywood screenwriter as God.”

Coronavirus will change the film industry for the near and perhaps even distant future, but the screenwriter will always be essential, says McDonald. And so is an audience. On the eve of Dreamland’s release, McDonald is a little disappointed to be unveiling on a small screen.

“It’s a little underwhelming. You always want the work to be seen as it was intended, and in this case, on a big screen. But this is where we are, and I’m looking into drive-ins — which, in itself, is kind of funny that we’re even talking about them.

It’s a little underwhelming. You always want the work to be seen as it was intended, and in this case, on a big screen. But this is where we are…

“But after doing a lot of TV, it was nice to make a feature and see that all the things that we love so much about television — the long arcs and character development, the language. With this movie, it felt like you could put all that narrative-y, language-y, into a film and create dreamtime — a dreamscape that you can step into….”

Or, as of tomorrow, a Dreamland you can stream straight into your home.

To read more of Katherine’s reviews, check out the Ex-Press archive, or sample career work at Rotten Tomatoes.