Behind Esi Edugyan’s Giller Prize-winning novel about the astounding exploits of Barbados-born Washington Black lies the very true story of William Fitzclarence “Fitz” St. John: A Vancouver longshoreman, unionist, and pioneer who — alongside his Indigenous co-workers — blazed a trail for equality and fair wages on the docks. 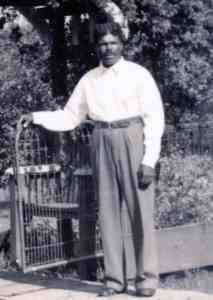 “Fitz was dedicated to helping his fellow man. He always stood firm on his principles, which included unionization and doing unto others as you would have them to do you.”

Esi Edugyan may have won a Giller Prize for her novel about the astounding exploits of Barbados-born Washington Black, but the story of William Fitzclarence “Fitz” St. John was the real thing. His long, remarkable life, which, like the fictitious Washington Black, also began in Barbados, stretched from the age of sail to man walking on the moon, before coming to an end at the ripe old age of 95 in 1970 in North Vancouver. Its breadth and diversity would have delighted any chronicler worthy of the name.

Fitz St. John was a stowaway, a seaman, a sealer, a writer of poetry for church ladies, a boxing promoter/manager and a hardworking longshoreman for a near record 51 years. He was a union man through and through; a Wobbly, in the forefront of a pioneering group of mostly indigenous lumber handlers who formed one of the first longshore unions on the Vancouver waterfront. Later, he was a stalwart on the picket line through several bitter, bloody strikes during the dock workers’ 40-year fight for union recognition. In 1953, after years of struggle, he was among 46 retired, union stevedores to receive the very first pension cheque handed out by the shipping companies: $60 a month.

Befitting his panoramic tale, St. John’s background is enticingly murky. He was born in British-ruled Barbados in the mid-1870’s into a family variously described as “a wealthy family of black plantation owners” or “a prominent Barbadian family.” Yet, his 1911 Canadian census lists his racial origin as “Irish,”which could mean his father was descended from the Irish labourers who signed on as indentured labourers to work on the island’s plantations before the influx of slavery. Married twice – 1905 and 1911 (this one, to Ellen Lockley of Staffordshire, England, lasted), his parents are listed on the two marriage certificates as “William and Rebecca St. John,”and then “William St. John – Naschez Prescod.”

At 14, as recounted by “Fitz” to other old-timers on the docks, he was already a “brilliant writer and scholar,” but still worked as a chandler when not in school, supplying provisions to ships in the harbour. On a whim, he stowed away on al barquentine to take up the wayfaring life of a sailor. One is left to ponder why the aspiring black youth would abandon his apparently privileged background for the seven seas. Perhaps tiring of the hard life, he jumped ship and wound up in Victoria in 1897. After a spell on the docks and an ill-fated attempt at sealing, he drifted up to Chemainus, where he hauled lumber by horse and wagon and supervised its loading onto waiting ships. He was also a hit at the local Baptist Church. Veteran stevedore Sam Engler recalled St. John telling him that he “became very popular in the community, writing poetry and cards for the ladies of the Calvary Baptist Church.”

Churchgoing, however, didn’t deter his involvement in the bruising fight game. He promoted and sometimes managed a Puerto Rican friend of his, Frank Fernandez, who was well known on Vancouver Island for his prowess in the ring.

At some point, the likeable longshoreman settled in North Vancouver and began his long tenure on the busy, Vancouver docks across the water. Initially, he worked at loading and unloading lumber. In the days before mechanization, this was one of the toughest jobs on the waterfront, requiring both strength and skill. Most workers on the lumber gangs were indigenous, belonging to the Squamish and Tsleil-Waututh First Nations, who seemed to relish the job. They were widely hailed as “the best men who ever worked the lumber.” St. John often joked about his race. With a hint of mischief, he would say: “I’m the only white man among a bunch of Indians.” But there was a handful of Chileans and Hawaiians, too. 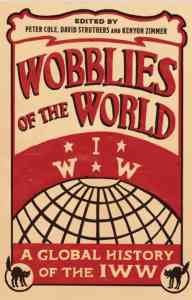 Wobblies: AKA IWW — the International Workers of the World. The book is available here.

In 1906, the mostly-indigenous lumber handlers made history. Seeking better compensation and rights for their hard work, they formed a union. It was one of the first on the waterfront and certainly the first ever for indigenous workers. Not only that, they affiliated with the militant Industrial Workers of the World, the most radical labour organization North America had ever seen, dedicated to the overthrow of capitalism. It’s not known precisely why they joined the Wobblies, but a major factor might well have been the IWW’s credo that class, not race, is the enemy. Most unions at the time spurned ethnic Asians and were not known to be overly friendly to indigenous workers. The Wobblies welcomed all races.

IWW Local 526 held their meetings on the Squamish reserve. “Fitz” was in the forefront. He served as secretary and designed the local’s insignia, a crossed peavey and crowbar. The local was soon known by everyone on the waterfront as “the bows and arrows.” Rather than pejorative, it was meant affectionately, embraced by indigenous dockyard workers, themselves. Although Local 526 disappeared after a year or two, following a difficult strike, indigenous lumber handlers continued to form unions over the years, the last existing until 1933. All were called “the bows and arrows.” 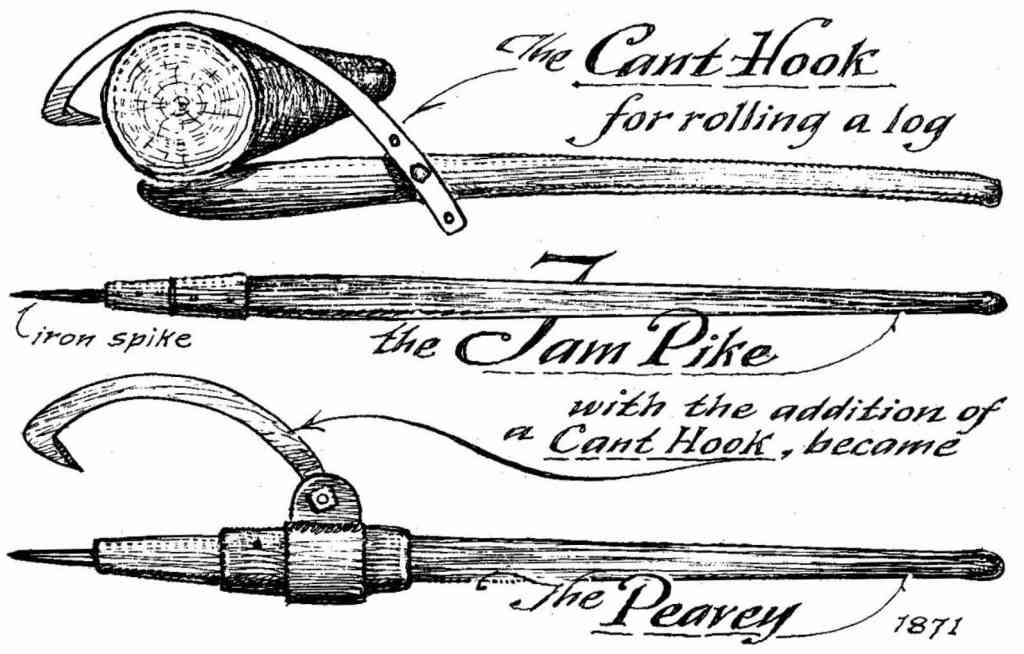 Don’t know what a Peavey is? It’s a loggers’ and longshoreman’s tool to safely and effectively move logs.

Fitz St. John had showed his strong union commitment even earlier. While a supervisor, he was fired by the shipping company for speaking out against the ten-hour day.

In 1903, after the city’s most prominent labour leader and a longshoreman at the time, Frank Rogers, was fatally gunned down during a strike on the waterfront, St. John was part of the longshore contingent who walked in front of Rogers’ horse drawn casket on its way to Mountain View Cemetery. The procession of workers that stretched out behind was said to be the largest in the city’s history, as they braved a tumultuous rainstorm. According to an account by well-known worker-poet Peter Trower, Fitz St. John kept the damp bowler hat he wore that day “to his dying day.” It remains in the family as a treasured keepsake.

The procession of workers that stretched out behind was said to be the largest in the city’s history, as they braved a tumultuous rainstorm.

Ensuing strikes by waterfront workers to win union recognition were some of the fiercest in Vancouver labour history, particularly in 1923 and an all-out confrontation in 1935, when police unleashed tear gas for the first time and charged into the ranks of unarmed strikers on horseback, swinging their batons, during the notorious Battle of Ballantyne Pier. St. John took part in both. But the persistent use of strikebreakers, protected by the forces of law and order, made strikes impossible to win, no matter how valiantly union members fought. It was not until legislation was passed in World War Two, forcing employers to bargain, that Vancouver longshoremen finally won the right to union recognition.

On the job, St. John mostly drove winch, a welcome change from the strenuous work of manually loading and unloading ships, before sail died away and mechanization made increasing inroads. One of his workmates, Paddy McDonagh, told a funny story about a time the two were working together, McDonagh on winch and St. John down in the hold directing him by hand signals. In those days, lanterns provided the only lights. As it got dark, McDonagh found his black partner less and less visible. “I can’t see you, John,” he yelled. The next day, as the same time approached, McDonagh looked down and saw something white. “I couldn’t make out what the devil it was. St. John hollered up: ‘Hey, boy, can you see me now?’ He’d gone out and bought a white shirt and white gloves.”

With no pension and no nest egg to fall back on, St. John, like many of his fellow longshoremen, continued working into his 70s, before retiring. But by then, the union was in place, and St. John was one of the benefactors of the first union-negotiated pension plan to cover the waterfront. After more than half a century of hard work, he received a company-paid stipend of $60 a month. Until his health began to fail, St. John was an active member of the International Longshoremen and Warehousemen’s Pensioners’ Association.

He passed away Aug. 31, 1970 in his tidy bungalow in North Vancouver. He left a son, Clarence St. John, who was a well-known barber on Lonsdale Avenue in North Vancouver. Calling him “a longshoreman’s longshoreman,” his long-time friend Sam Engler observed: “Fitz was dedicated to helping his fellow man. He always stood firm on his principles, which included unionization and doing unto others as you would have them to do you.” 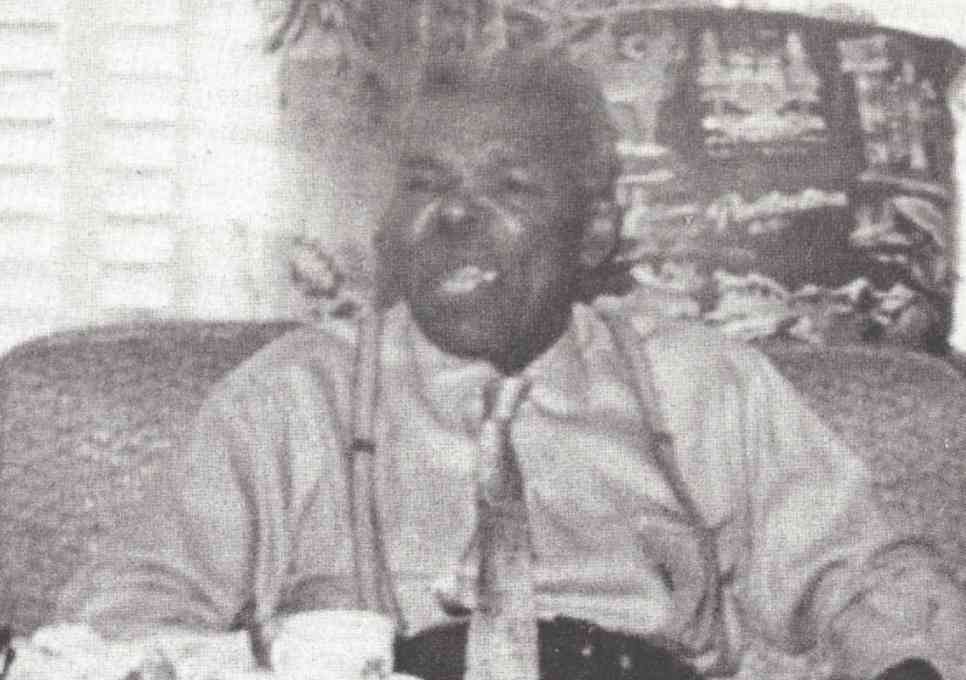 Fitz St. John at home in his retirement, enjoying the fruits of his hard-earned pension.

— Thanks to Donna Sacuta and Bailey Garden of the BC Labour Heritage Centre for their diligent help with research.

To read more Mickleburgh, check out Mickleblog, or visit the Ex-Press archive.