“I don’t think people realize what our boys did,” says one D-Day veteran who watched his brothers in arms succumb to enemy bullets in the bloody battle that marked the beginning of the end of World War II. 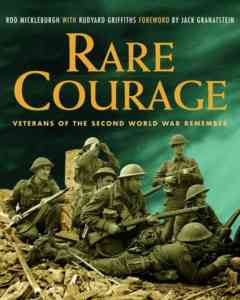 Rare Courage tells the stories of World War II veterans in their own words.

In 2004, I was fortunate enough to be asked to do a book consisting of 20 first-hand accounts of wartime, experienced by Canadian veterans of World War Two, in their own words. They are as varied and fascinating and heartfelt as one could possibly imagine. What they went through to take on the might and evils of German fascism and Japanese imperialism…. when basically, they were just kids. The book’s title Rare Courage could not be more appropriate. Most have since passed on since I interviewed them, but their compelling stories remain.

On this, the 75th anniversary of D-Day, here are two vivid, eye-witness accounts from my book of the historic landings that day on the fortified beaches of Normandy. Gorden Hendery was in charge of one of the landing craft for Canadian troops. Hugh Neilly had volunteered for the British Army. On D-Day, with the East Yorkshire Regiment, he was one of the first soldiers ashore. History doesn’t get much more gripping than this.

“I didn’t get any sleep that night. I was excited. As I walked up and down [the deck], officers were in our cabins, writing letters to their loved ones. We had breakfast at four o’clock.

“Finally the boys were up on deck, opposite their landing craft. We issued them all vomit bags. We boarded the craft, loaded them in the water, and, was it ever rough. It was awful. We were about four miles from the beach. All of a sudden, every battleship, destroyer, every ship that had a gun started to bombard the beaches. The smoke and the flames and the roar were overwhelming. And the boys on the craft said this was going to be a picnic, if they were going to bombard the beach like that. But we knew damn well from experience that whenever we got on a beach, there was enemy fire to greet us.

“The boys were loaded on the deep side of the landing craft under the deck, so they wouldn’t get wet. But it was very, very choppy. Fear and seasickness from the rich dinner the night before and everything else all accumulated to make them as sick as could be. They were so happy to have the vomit bags. There were 30 soldiers to a craft. Some had machine guns. They all had rifles and 60-pound packs. They must have been terrified, but you know, they trained for this. They were soldiers. 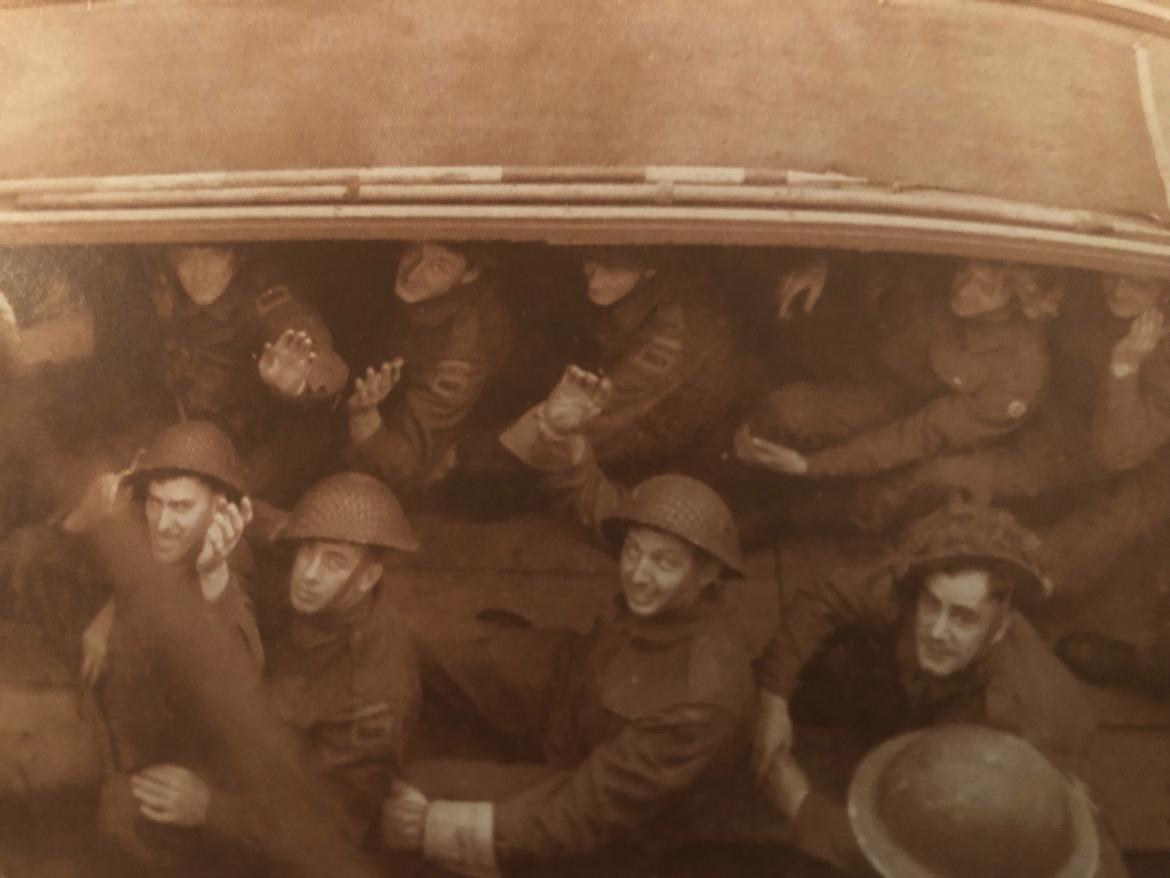 “On the way in, a wonderful thing happened. A young sergeant got up on the deck beside me and started to sing a song, “Roll Out the Barrel.” Everyone joined in. It was one of the most moving experiences I had during my almost five years in the service. There was fear on everyone’s faces, and he tried to brighten up their spirits. I was in the same fix. I was human, too. And it worked. The fear left our faces….

There was fear on everyone’s faces, and he tried to brighten up their spirits. I was in the same fix. I was human, too. And it worked. The fear left our faces….

“Then we saw these nasty spikes that came up out of the water. They had mines on the end of them. We knew if we touched one we’d be blown to smithereens. We wanted to get the boys landed on dry sand, but the craft got stuck on an obstacle under the water. Just think how the boys felt: seasick, packs on their backs, being splashed from machine-gun bullets beside the craft. I hesitated to order “down doors,” but it had to be done.

“They jumped into the water. Some were up to the waist. Two of the shorter lads jumped in and didn’t come up. Terrible. They only had 20 feet of water to go through, but it was deep. And there was not a damn thing we could do, because our orders were to get out of the way and back on the ship as quickly as possible.

They jumped into the water. Some were up to the waist. Two of the shorter lads jumped in and didn’t come up. Terrible.

“The guys got out in one heck of a hurry. They dashed across the beach. Some fell from machine-gun fire. Some were hit before they even made the beach. We could see all this. Imagine training in England for three years and not even being able to get to the beach before being killed. I don’t think people realize what our boys did.

“When we got back to the ship, Scott Young was on board. He was a reporter, I think, from the Globe and Mail. He asked me what happened. I told him everything and he passed this on to Matthew Halton, who was a Canadian radio reporter [CBC]. And when they announced the Normandy landing, they referred to our ship and my name was mentioned. So my family knew I was safe.”

Our troop ship was the Glenearn. We stayed there overnight before the landing, and someone said, “Winnie’s here! Winnie’s here!” I went up on deck and sure enough, there was Churchill standing in a launch, with cigar and bowler hat. He waved his cigar at us, and that was the biggest excitement of that day.

“Leaving the harbour that night is the one thing in my life that I will never forget. As far as you could see in every direction, nothing but boats. Nobody went to sleep. We were all leaning on the rail, watching. But we couldn’t see lights over there. Just a dark, low coastline. We had a huge breakfast at three in the morning. Bacon and eggs, which was a real rarity. We had to put blacking on our faces. Our helmets were covered in netting that we called scrim. We were ready.

Leaving the harbour that night is the one thing in my life that I will never forget. As far as you could see in every direction, nothing but boats. Nobody went to sleep. We were all leaning on the rail, watching. But we couldn’t see lights over there. Just a dark, low coastline.

“When the ship stopped, we knew we were off the coast of France. Watches were synchronized, checked and re-checked, along with the rifles, the Bren guns, the Sten guns, the ammunition pouches. Day was breaking fast and the waves were very high. We were the first ones to go down. Colonel Hutchinson came on the loud hailer and wished us all luck. “I want you to repeat after me: ‘It all depends on me.’” So we all repeated that. It was very tricky getting into the LCA because the waves were high. But we made it all right and we pulled away. We lined up four abreast. On the far side there was B Company. We were followed in three minutes by C and D Companies. And behind them, other companies were coming in. You had to get in there, get landed, and get through their defences in three minutes so the next wave can come in after you. That’s how tight it was.

There was a terrible noise all the way in. Navy boats were firing shell after shell. And planes were going over. If there was sky, we couldn’t see it.

“There was a terrible noise all the way in. Navy boats were firing shell after shell. And planes were going over. If there was sky, we couldn’t see it. The German shells started coming, too. When we landed, there were these beach defences ahead of us. I got my men out, and I dashed forward. Then flat on the sand. We were first. There were no other footprints. My men followed me and immediately spread to the right. Within 30 seconds of landing, one of my men went down. I heard someone say, “Oh God, Billy’s been shot.” He was dead before he hit the ground. 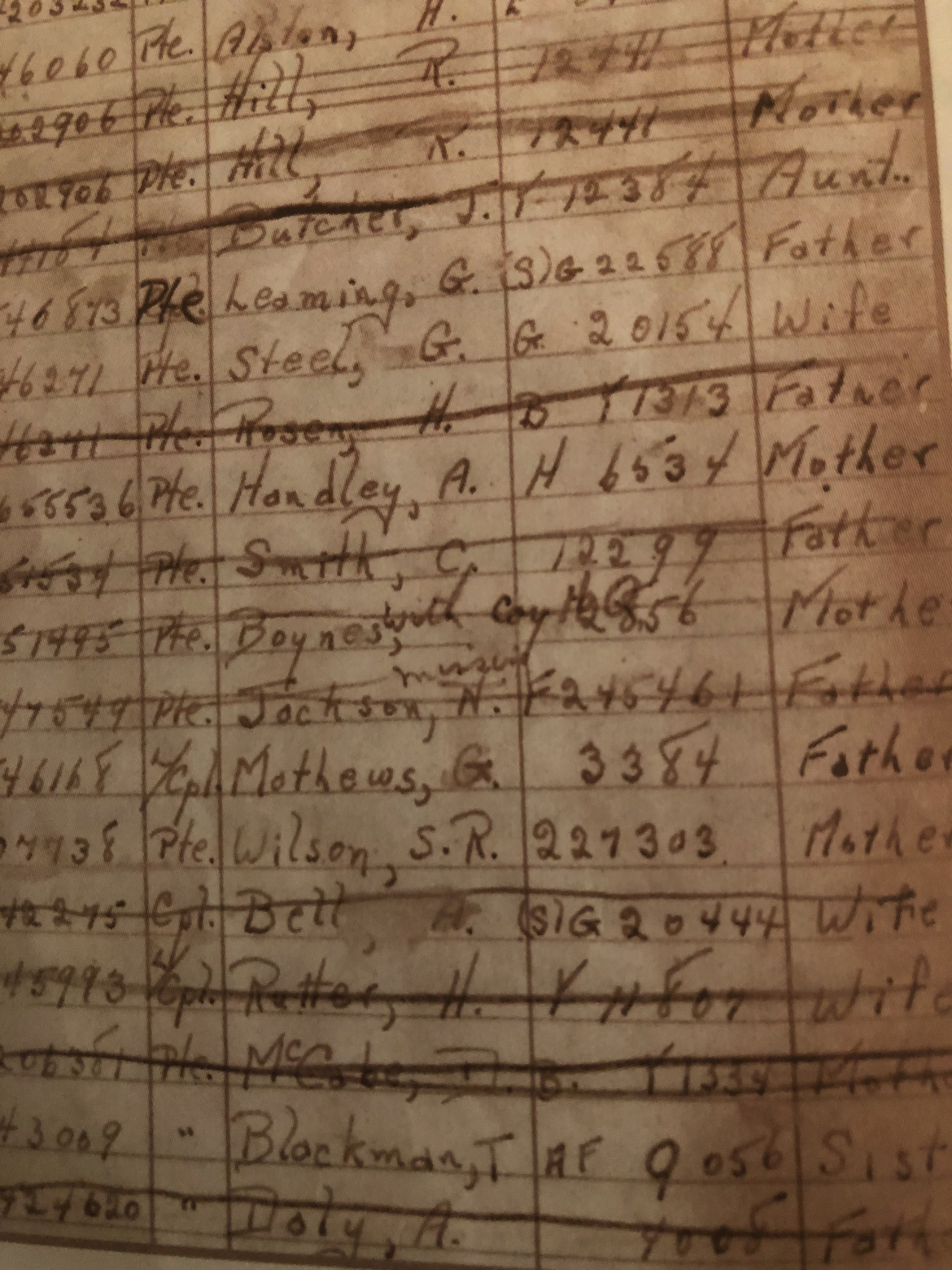 An excerpt from Hugh Neily’s log book listing the platoon members he led onto Sword Beach. He drew lines through the names of those who were wounded and killed during the landing.

“I looked to the left. Nothing moving there. I looked to the right, and I said to my sergeant, “I’m going to go in. Follow my tracks.” So I ran straight forward to where this machine-gun post was. My runner was right behind me, carrying the wire cutters. We cut the wire in just seconds. We’d practised this. And I crawled up the dunes. I can still feel those little reedy grasses on my face. Because of our model, I knew exactly where the machine gun was. The post was circular, about eight feet in diameter. I crawled up on my belly as close as I could, reached back a got a grenade. I tossed it and it hit the concrete parapet. My first reaction was, For God’s sake, don’t go down there and kill them. My next reaction was, You damn fool. That’s why you’re here.

The grenade exploded right on the parapet, and immediately a white flag came up. But nothing happened. So I fired one round and four fellows came out. They were the sorriest excuse for soldiers I’d ever seen. I thought, My God, is this what we’re fighting? They stood there with their hands behind the back of their heads. Then they sat down and we left them behind.” (Hugh Neily was wounded a few days later, as his Regiment advanced against fierce German opposition.)

Heroes all. We owe them so much.

For more Mickleburgh, visit the Ex-Press archive or Mickleblog.