Funerals for public figures can often be stuffy affairs with formal speechmaking and half-hearted appeals to emotion, but the recent ceremonies for B.C.’s former premier were rife with real affection.

So, farewell then, Dave Barrett. A month after the remarkable NDP leader passed away, it was time for the public to bid adieu, formally and informally.

The official state memorial in Victoria came first, followed the next day by what was more a gathering of the clans at Vancouver’s Croatian Cultural Centre, not that far from where Dave Barrett grew up on the city’s rough-and-tumble east side. Both events were packed, befitting the immeasurable contribution he made to the province of British Columbia during his short 39 months as its first socialist premier. (Unlike today’s New Democrats, he never shied from using the term “socialist.”) Beyond his political legacy, there was an outpouring of real affection for someone who had such a long career, was generous with his time and compassion and never ceased battling for folks on the bottom rung of life’s ladder.

“He believed in wielding power on behalf of those who didn’t have it,” said former NDP MP and MLA Dawn Black, in a strong speech to the Vancouver mourners. “He made them feel like they counted, that they mattered.” Said Simon Fraser University president Andrew Petter, hired, at 19 as executive assistant to Barrett’s Housing Minister Lorne Nicholson: “He was the only politician I know who would speak openly about ‘love’.”

Not surprisingly, each of the memorials was pretty much an NDP house. As Premier John Horgan observed, they were the sort of crowds where fund-raising buckets would have been passed around at the end, to be stuffed with coins and bills from those fired up by Barrett’s uplifting, passionate oratory.

One of my political heroes, Bill King, also spoke in Victoria. King went from the cab of a locomotive to Labour Minister under Barrett and was arguably the best BC ever had. He presided over a bold new labour code that forever changed the nature of industrial relations in this polarized province, drawing interest and accolades from across North America. Tough as nails, King took no guff from anyone, whether it was the business community or segments of the labour movement, headed by the equally tough head of the BC Federation of Labour, Len Guy, who quarreled with King throughout because he felt labour should have got more. “Barrett,” King told the crowd, “was passionate, hilarious and at times impetuous. He was really a fireball.” 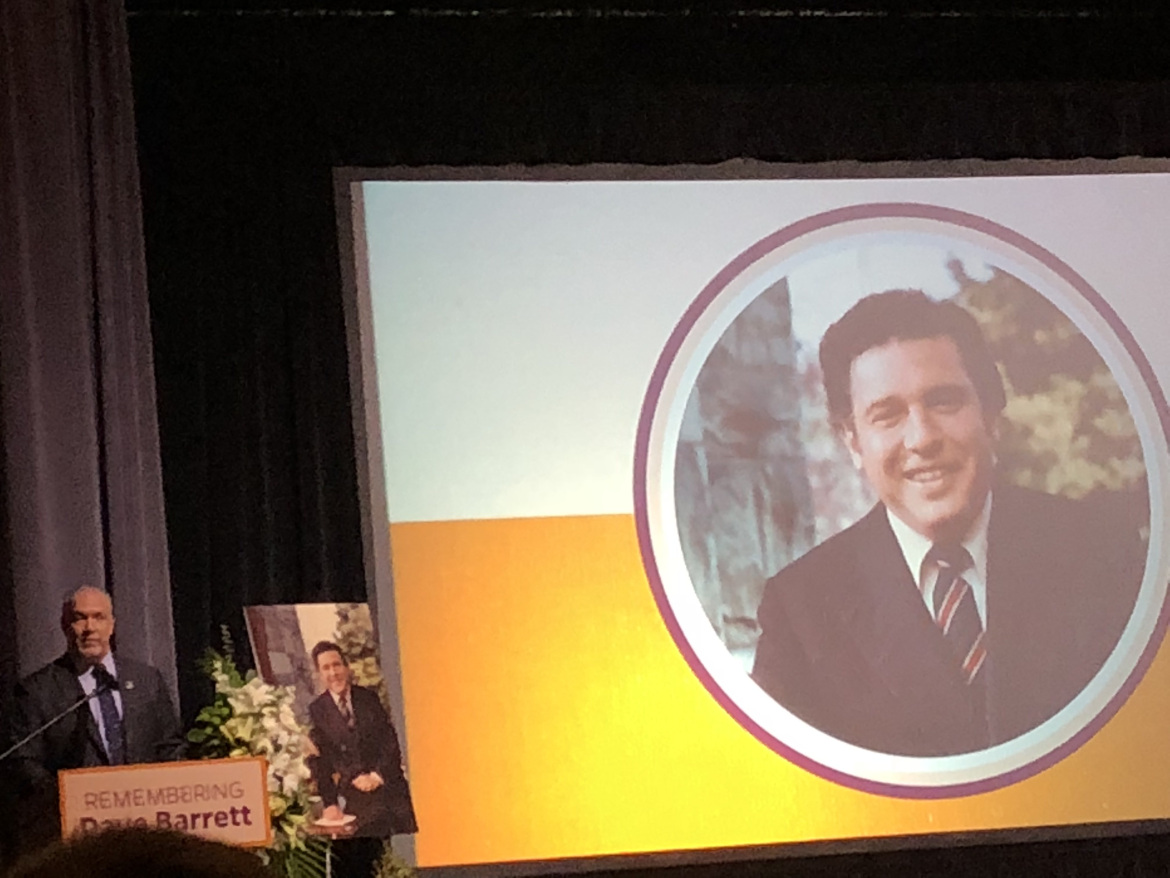 Not to be eclipsed: BC Premier John Horgan pays tribute to Dave Barrett, who paved the way for BC’s NDP. Like the early days of Barrett’s government, Horgan’s approval rating is at 52 per cent, the highest ranking of any Premier (and a tie with Saskatchewan’s Scott Moe.)

I missed Victoria, but did take in Vancouver, inwardly groaning at the long list of speakers despite assurances they would stick to their five-minute time limits. “New Democrats can’t say hello in under five minutes,” quipped John Horgan. But by and large they did, and the afternoon went by quickly, a warm, loving fitting tribute to what Dave Barrett meant to this province, and to the NDP.

I was glad that some recalled and rued Barrett’s defeat in his bid for federal leadership of the NDP in 1989. He lost on the fourth ballot to well-meaning but lack-lustre Audrey McLaughlin, in large measure because of a belief by eastern party members that the NDP had to elect a leader who spoke French in order to have any chance in Quebec. McLaughlin was bilingual. Barrett’s warning about the pending threat of western alienation was ignored. Under McLaughlin, the NDP was virtually wiped off the face of the map in the next election, a shellacking that almost certainly would not have happened with Barrett at the helm, one of the best campaigners the NDP ever had. (Barrett’s heads-up over western alienation turned out to be prescient, since the rise of the Reform Party was a major factor in the NDP’s poor showing, while the party went nowhere in Quebec.) Horgan was one of those expressing regret at the party’s leadership choice. “Just think what would have happened if Dave Barrett had become leader of the federal party,” he exclaimed. Added Joy MacPhail, who was in the forefront of Barrett’s bid: “…the way he would have stormed the federal stage…I think to this day that he would have made the best leader.” The Ottawa press corps would have lapped up his humour and no-holds-barred, colourful presence.

But of course the major focus was Barrett’s unforgettable tenure as premier, which so changed British Columbia — almost all for the good. “He taught us that you could win by not compromising your views,” said former premier Glen Clark, no shrinking violet himself when he led the province. “He had an unshakeable belief that the power of government could be harnessed to make change.” Moe Sihota, the province’s first South Asian cabinet minister, referenced the historic election of black candidates Emery Barnes and Rosemary Brown and Frank Calder of the Nisga’a Nation in 1973. “He [Barrett] never thought that colour was a barrier.”

Andrew Petter remembered how the Barrett government was savaged by free-enterprisers, even those south of the border. A report on socialist BC by Barron’s Magazine called the premier ‘Allende of the North.’ “He considered that a compliment.” (When Allende was shot in the Chilean coup that overthrew his democratically-elected, Marxist government, Barrett ordered the BC flag outside the legislature flown at half-staff.) “The lessons he taught me have guided me for the entirety of my adult life,” said Petter. “Dave, we would have been so much poorer without you.”

Dawn Black singled out two specific measures of the Barrett government that affected her personally. One was the banning of the strap, an enormously controversial move at the time. “I was strapped and I remember feeling so humiliated and feeling the powerlessness of a young person at the power of an adult.” She also pointed to the NDP’s often-overlooked role establishing the BC Cancer Control Agency. “I’ve had two kids with cancer. The [BCCA] provided them with the highest standard of care in the world, and that meant everything to me.”

Dawn Black also pointed to the NDP’s often-overlooked role establishing the BC Cancer Control Agency. “I’ve had two kids with cancer. The [BCCA] provided them with the highest standard of care in the world, and that meant everything to me.”

Somewhat to my surprise, the best summation of what Dave Barrett bequeathed to the province was delivered by BC’s forgotten premier, Dan Miller, who filled in as interim leader between Glen Clark and Ujjal Dosanjh. Miller moved from his job in Prince Rupert’s Cellulose pulp mill to work as Highway Minister Graham Lea’s executive assistant in Victoria.

Politics were different back then, said Miller. It wasn’t about brief sound clips and making the 6 o’clock news. It was about filling union and community halls to build support. “You had to fill the halls, and for that we had Dave Barrett. He was the only speaker I’d ever heard who could make the hair on the back of my neck stand up. He would read the audience, and then just take off.” On the night of Aug. 30, 1972, when the impossible happened and the unbeatable WAC Bennett went down in flames, bringing the NDP to power for the first time, Miller said the euphoria he experienced that night “has never been duplicated.”

Astutely, Miller likened the impact of the Barrett government to the profound changes that swept Quebec with the election of Jean Lesage and the Liberals in 1960, ending the long run of the socially conservative Union Nationale and its quasi-authoritarian leader Maurice Duplessis. What followed has gone down in history as Quebec’s Quiet Revolution. “In the same way, Dave Barrett brought BC into the modern era,” said Miller. He added, with a wry smile: “Although you might describe his revolution as a noisy one.”

Marc Eliesen, imported from Manitoba to restore some stability to the chaos that often overtook the Barrett government, said he once asked Shirley Barrett why she stuck around with a husband so often away and so consumed by politics. She replied: “I want to see what happens next.”

Dave and Shirley were married 64 years, their affection for each other undiminished by time or Alzheimer’s. But the disease took his father’s famous voice, not his spirit, said son Joe. “We knew he was there in gestures and smiles and the way he looked at us. With my mom, you could see the connection between them, even when the illness was very advanced. It was quite beautiful.” 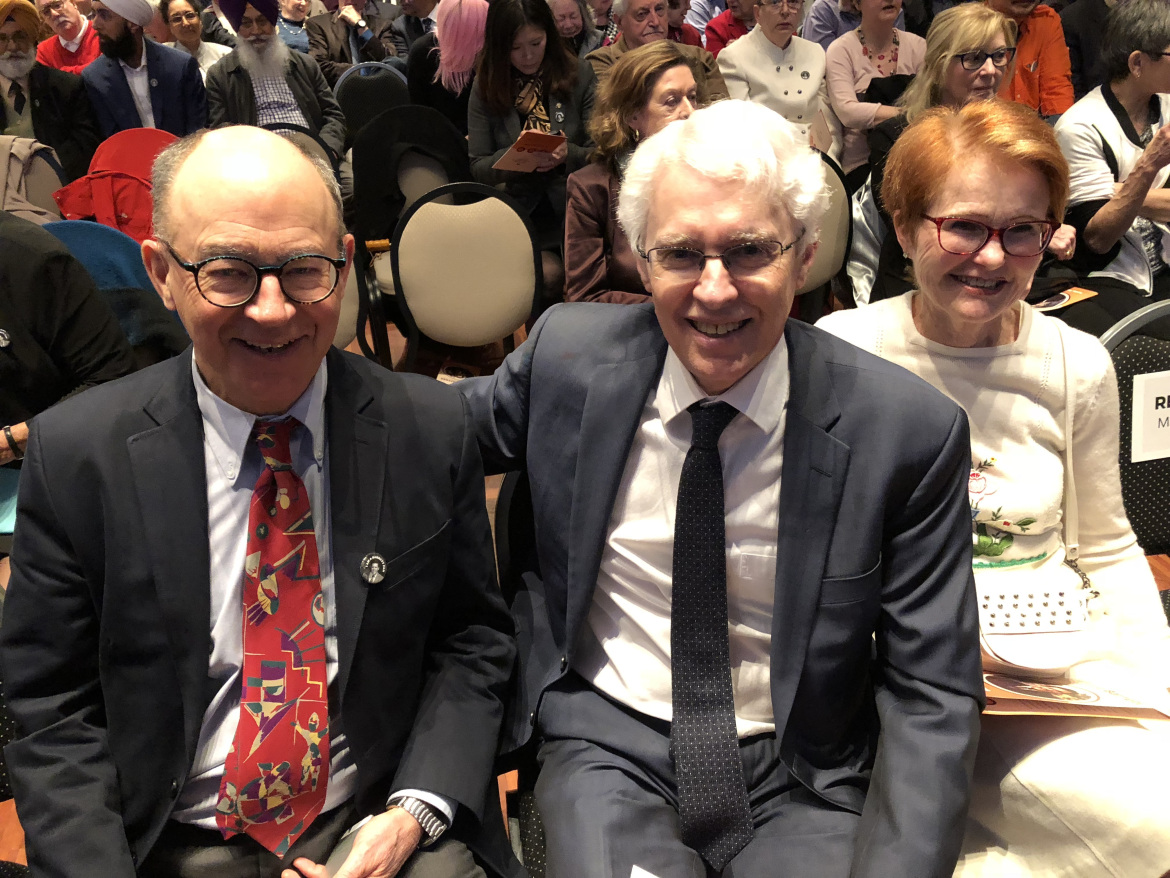 For more Mickelburgh, please visit the archive or check out Mickleblog.com

No Replies to "Bidding Adieu to Dave Barrett"