There Is Power in a Union Movie

In a world where the salaried worker is becoming an endangered species and the income gap is now the Grand Canyon, the only place to find solace may be on the silver screen — where workers of the world can still win

(September 4, 2017) I had fun doing this a few years ago, compiling a list of my top ten films for Labour Day viewing. This was in 2014, when BC teachers, instead of heading back to school, were still on strike from the previous June. They would have several more weeks to go, before the longest province-wide teachers strike in BC history was over. And, just like in some of these movies, there was a happy ending. Last November, the teachers won a resounding victory in the Supreme Court of Canada, restoring classroom limits and other staffing measures the BC Liberals (remember them?) had illegally stripped from their contracts way back in 2002 (Jean Chretien was still Prime Minister!) The result has been the hiring of hundreds of new teachers for the new school year, making this perhaps the best ever Labour Day for BC teachers.

So, in response to absolutely no demand, here’s my Top 10 List again. I, myself, would definitely add the recent movie Pride, which is now one of my favourite union films. It’s a true story, combining both gay rights and the historic 1983 coal miners’ strike, and is terrific from start to finish. Highly-recommnded. And I note that the great Charles Demers, writer, comedian and socialist extraordinaire, is high on Billy Elliott as a union movie, since the same miners’ strike depicted in Pride is very much a part of the inspiring saga of young Billy’s aspirations to be a dancer. 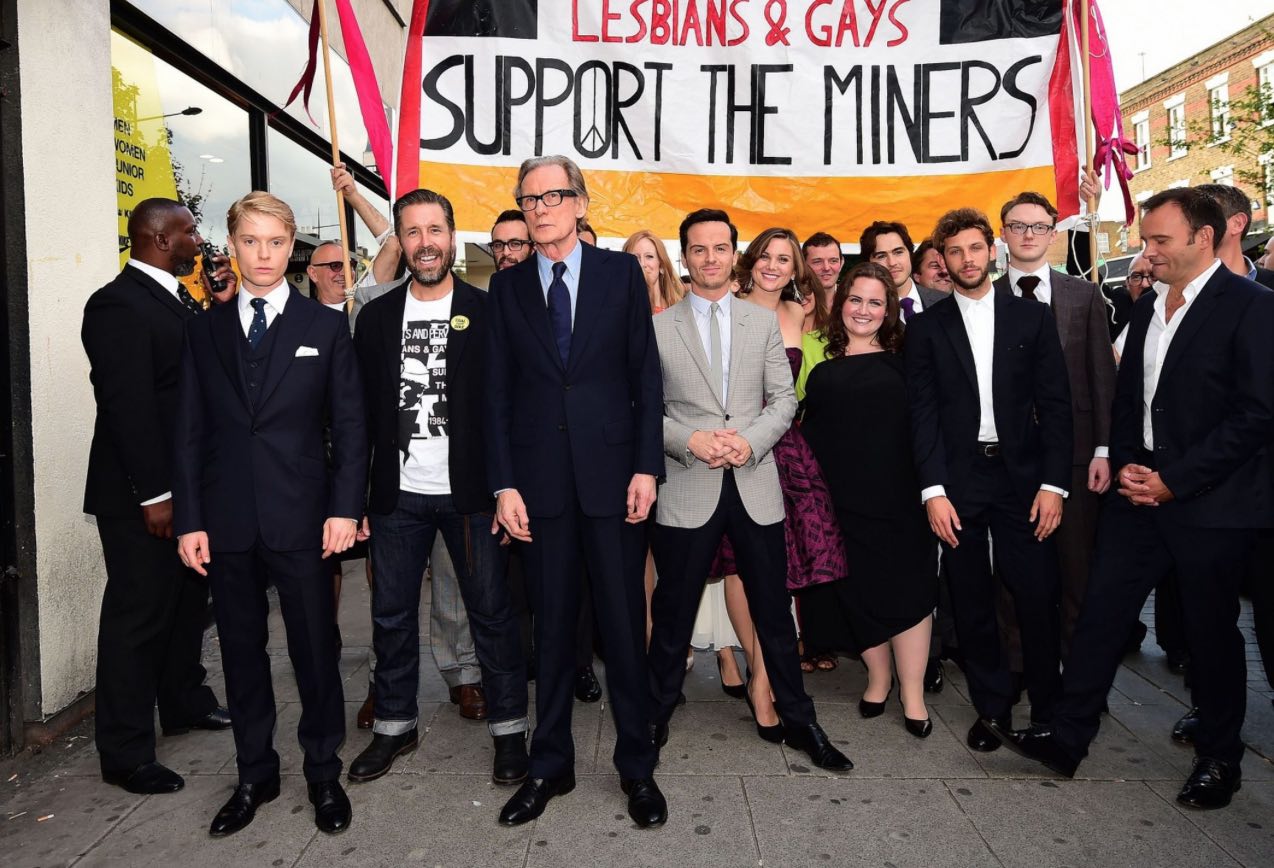 There is power in all kinds of unions: Bill Nighy and Paddy Considine star in Pride, based on real events.

(Thanks to Mark Leier, former director of the Centre for Labour Studies at Simon Fraser University, specializing in union and left-wing worker movements, for the idea. And a cautionary note: not all of these movies paint unions as 100 per cent good.)

10. On the Waterfront. Okay, this isn’t going to get anyone fired up to join a trade union, but it’s a vivid depiction of what happens when unions go bad, and ordinary workers are faced with tough choices. “I coulda bin a contender…,” Brando laments.

9. Roger and Me. I am not as big a fan of Michael Moore as others. The journalist in me doesn’t like the way he sometimes distorts chronology, stages stunts and edits interviews for his own purposes. But he’s often funny and, at his best, provides some badly-needed skewering of “things that are wrong” with U.S. society. Roger and Me, dealing with massive layoffs by General Motors in his hometown of Flint, Michigan, was his first documentary to hit it big. Lots of good moments.

8. North Country. Another movie that does not show a union in a particularly good light, but well worth watching for the courage of a female mine worker combatting on-the-job sexism in a northern Minnesota town. The union meeting is a classic. Stars Charlize Theron, along with the ever-excellent Frances McDormand. And, as a special bonus, there are many songs by Minnesota native Bob Dylan, including a killer version of Tell Ol’ Bill.

6. Blue Collar. It’s been a long time since I saw this little known film, starring Harvey Keitel, Richard Pryor and Yaphet Kotto. But I remember finding it quite powerful in its presentation of “ordinary” blue collar workers, and, like On the Waterfront, what to do  when they discover their union is corrupt. It’s useful to remember that corruption used to be far more pervasive years ago in unions based in the United States.  Many were subsequently cleaned up by vigilant prosecutors and an aroused membership. While Canadian labour organizations, like the rest of us, make mistakes, union corruption has always been relatively rare up here. A movie that exposes union corruption and intimidation is not necessarily anti-union, unless it suggests such matters are endemic, which they are not. Note: this strong movie is not a comedy, despite the presence of Richard Pryor.

5. Grapes of Wrath. This tremendous, moving adaptation of Steinbeck’s classic novel about downtrodden Okie sharecroppers during the Depression would have been at the top of my list, but it’s not strictly a union movie. However, it certainly touches on the fight for decent wages and the thuggish forces unleashed against those simply standing up for their rights. Henry Fonda’s famous speech that closes the movie is unforgettable.

4. Made in Dagenham. This excellent, under-appreciated film, staring Sally Hawkins, Bob Hoskins and Rosamund Pike, deals with the tensions and ups-and-downs of a pivotal strike by a group of determined women at a Ford plant in England in 1968. They wanted equal pay with men. Imagine that. I found it quite uplifting.

3. Harlan Country, USA. I know there are other terrific documentaries about strikes and unions, but it’s hard to imagine any better than this riveting profile of a coal miners’ strike in deepest Kentucky. Directed by Barbara Kopple, the film won an Academy Award for best documentary in 1976. Powerful.

2. Matewan. Independent film-maker John Sayles is one of my favourite directors. I’ve seen most of his films and rarely have I been disappointed. Although there’s a lot of competition, this may be his best. It covers a violent, real miners’ strike in the coal fields of West Virginia in the early 1920’s. The marvellous David Strathairn is particularly wonderful as the town sheriff trying to keep law and order, when both sides have guns. James Earl Jones, as always, is great, too. Hazel Dickens dominates the soundtrack with several haunting songs straight out of the backwoods. Extremely satisfying movie on all counts.

1. Norma Rae. No surprise. The best movie ever made about union organizing in a tough environment. Yet Norma Rae succeeds so well because it is more than that. There’s also a great deal of human drama, too, as individuals caught up in the action struggle with their own lives, not merely against conditions in the textile mills. If you’ve already seen the movie, you’ll remember that one scene destined to live forever in union lore. I dare you to remain unmoved. Sally Field won a well-deserved Oscar for her strong performance, but her husband Beau Bridges does a good job as well, trying to cope with forces he never imagined when the two were married. Essential viewing.

P.S. Also recommended are some movies I haven’t seen but are touted by others: Bread and Roses, Strike (Eisenstein’s silent move classic), Salt of the Earth, and Germinal, based on Zola’s epic novel of coal miner families and a strike in  northern France.

NOTE:  I was trying to update a previous post on this from 2015 for Facebook, and ran into WordPress hell. So it’s up as an original rather than as an edit of the 2015 post, if that’s clear. Who am I again? Where’s Waldo? Anyway, Happy Workers’ Day!…

For more Mickleburgh, please visit Mickleblog or the Ex-Press archive.

No Replies to "There Is Power in a Union Movie"