Trish Dolman directs the national selfie: Canada in a Day

(July 1, 2017) VANCOUVER — There is something extraordinarily moving about Canada in a Day, even though one might say it’s thoroughly ordinary.

A visual scrapbook pulled together from over 16,000 video submissions from average Canucks who pointed the camera at their own lives on September 10, 2016, this selfie collage isn’t a film made by the rich and famous. It wasn’t scripted, and contains no professional actors. Yet, there is drama. There’s a palpable sense of theme. And despite the diversity of the players and their unique messages, one even feels a sense of unity. A shared heartbeat echoing empathy and human understanding. It’s lurking in every frame, because it’s part of who we are as a people. 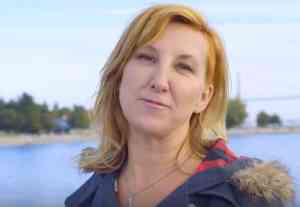 Trish Dolman: The Vancouver filmmaker brings a big heart to Canada in a Day

It’s also because of Trish Dolman, the Vancouver-based producer and director who took on the challenge of crafting our national portrait. She’s too humble to admit it, but she’s probably the biggest reason why this celebratory project airing today on CTV is such a success: She sees the beauty in all that is ordinary, and she makes the ordinary beautiful.

“I can’t really take any of the credit for it,” she says. “This would not have been possible without the participation and contributions of people across the country. They provided the footage.”

Solicited with the help of the Bell-CTV network, hundreds of hours of material poured into Dolman’s inbox over the course of several weeks last fall. From there, it had to be logged and sorted, and if selected, assembled into some basic form. Dolman says she and a small team developed a system to process all the material, creating layers of imagery that would “reflect a broad spectrum of Canadians.”

I can’t really take any of the credit for it…This would not have been possible without the participation and contributions of people across the country. They provided the footage.

Capturing the sameness and the differences among humans lies at the heart of the whole “In A Day” exercise. Originally conceived by Ridley Scott, the notion of crowd-sourced documentary filmmaking became a reality thanks to the smart phone with 4K video recording, giving rise to the original Life in a Day — a 2011 release created by filmmakers all over the world.

Since then, several nations — including Japan, Italy and Britain — have taken up the challenge to create their own visual quilt.

Dolman knew about the Life in a Day films, but it wasn’t until she got a phone call from a friend who worked at Scott Free — Ridley Scott’s production company — that she threw herself into the mix five years ago.

“They had the rights to Life in a Day, and he asked me who should do it for Canada. And I said ‘Me!’”

With a solid background as a producer (Flower and Garnet, Daydream Nation, Hector and the Search for Happiness) as well as documentary director (Eco-Pirate: The Story of Paul Watson), Dolman was the ideal choice. She developed the idea and found a partner in CTV digital, who put out a national call for submissions, then she waited.

She wasn’t overwhelmed by the sheer volume of material — approximately 311 hours — nor was she daunted by the idea of putting it all together. She says she and the team actually came up with a system to catalogue and sort the material, and hopes she’ll be able to implement the same techniques on another Life in a Day project.

“There were a series of questions that we asked, similar to the ones asked in Life in a Day: What do you love? What do you fear? And we also asked What does Canada mean to you? since it was the anniversary. And what are your hopes and dreams for the future?” says Dolman.

“It’s funny. It’s hard for people to understand you just want them to shoot their regular life. They don’t think it’s going to be interesting. But what is interesting is the most authentic, the most observational, verité style footage we got. It’s real,” she says.

It’s funny. It’s hard for people to understand you just want them to shoot their regular life. They don’t think it’s going to be interesting. But what is interesting is the most authentic, the most observational, verité style footage we got. It’s real…

“I just wanted to reflect who we are…. there are a lot of indigenous stories, immigration stories, refugee stories. There are stories from people from every walk of life. That’s what we really wanted.”

Just about every corner of the country get some screen time, and if you’re one for checklists, you’ll be able to check off the mandatory Great White North ingredients: Hockey, moose, and the Sudbury Nickel — scored to the sounds of Dan Mangan and The Tragically Hip.

Through it all, Dolman says one common theme emerged from all the submissions. “People are very grateful to be here. There’s a very deep appreciation for Canada… I wasn’t expecting that to be so pronounced.”

She also wasn’t prepared for the honesty, and the many raw moments people decided to share. “I’m sure there are people who recorded something, but never sent it in. They didn’t want to show something too intimate. But I was so moved by the people who did share. I couldn’t get over how vulnerable people allowed themselves to be. And I felt a huge responsibility as a result. People trusted me with their feelings, and I’m so grateful they did. I took that seriously.”

Obviously, she couldn’t get all the footage into a 90-minute TV-window. The first assembly was over ten hours long.

“It was hard to cut… I just went with material I found moving. And so much of it was.

Dolman says she’s never bought into the whole idea of being subjective. She says it’s not possible, and it’s not even practical when it comes to the creative process. Great art needs feelings, and feelings demand an engaged stance. Therein lies the Dolman factor residing deep within Canada in a Day: Profound empathy.

“As the footage was coming in, I would watch it at night and I would be moved to tears many times. By just how personal and unique the footage was of people’s lives. I thought it was pretty extraordinary,” she says.

As the footage was coming in, I would watch it at night and I would be moved to tears many times. By just how personal and unique the footage was of people’s lives. I thought it was pretty extraordinary

No Replies to "Trish Dolman directs the national selfie: Canada in a Day"