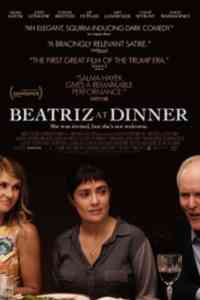 After directing episodes of Nurse Jackie, Ugly Betty, The Carrie Diaries and Grace and Frankie, Miguel Arteta learned a few things about directing women for the screen. First: A woman’s facial expressions often speak louder than words. Second: Feelings can change in an instant, so keep the camera rolling a little bit longer, and you’ll have a chance at something unexpected.

Beatriz at Dinner is designed to elicit something unexpected, and it many ways it does — thanks to the stellar ensemble lead by Salma Hayek, who takes on a rather different role as Beatriz. A massage therapist and healer who works at the local cancer centre, Beatriz shares her small California bungalow with goats, and a variety of other animals.

We don’t linger in her cozy home, but there’s no doubt it’s a reference point. Another is the entirely surreal image of a white goat on the shores of an Edenic lagoon. It recurs throughout the film. It’s the image of happiness Beatriz carries with her: A mental reminder of her old home in Mexico, before the water was polluted and the ground was rendered toxic by development.

We don’t know all this at the beginning. All we know is Beatriz is a healer. After she leaves the cancer clinic, we watch as she drives her beater VW through a gated Malibu community, stopping at a sprawling Tuscan-inspired villa.

There she meets Kathy (Connie Britton), wife of wealthy businessman, Grant (David Warshofsky). Beatriz gives Cathy a massage, they exchange friendly but empty words, and Beatriz leaves. Or at least she tries to leave. Her car won’t start.

So begins an unpredictable series of events that lands Beatriz on an alien planet of privilege. She is invited to a high-stakes dinner party with Grant’s mentor, Doug Strutt (John Lithgow), as well as Doug’s wife (Amy Landecker), a junior colleague (Jay Duplass) and his fiancee (Chloë Sevigny).

It’s a fish-out-of-water scenario with Beatriz flopping on the top deck while a gaggle of gin-and-tonic sippers ogles. It’s painful. But it’s also dark and funny the way great social satire can be when it’s hitting the right nails on an idealogical coffin.

It’s a fish-out-of-water scenario with Beatriz flopping on the top deck while a gaggle of gin-and-tonic sippers ogles. It’s painful. But it’s also dark and funny the way great social satire can be when it’s hitting the right nails on an idealogical coffin.

Doug Strutt is a man who brings a big chill: A business tycoon who takes no prisoners and isn’t afraid to break the law to get what he wants. And from what we can gather, he just got his latest wish. Everyone is celebrating except Beatriz, who feels Doug is a morally bankrupt man who inflicts harm and sews discord in the cosmic farm.

“It takes only seconds to break something… but try to heal something. It takes much longer.” And so, Doug and Beatriz become engaged in the kind of conversation that soon turns into an argument about fundamental values: Money versus people, financial success versus emotional success.

Hayek and Lithgow make a wonderfully dynamic screen team that adds visual dimensions to theme, with his long, white frame standing in stark contrast to Hayek’s short, dark and stocky trunk. He is all limbs and gesture. She is all earthy action. He is greed. She is goodness.

White’s script pulls all the necessary teeth in what turns out to be painful moral surgery. Fortunately, Arteta finds enough comic ether to keep us under his spell thanks to the razor-sharp accuracy of the surrounding players.

It’s this victory of balancing comic scale and dramatic weight that makes Beatriz at Dinner such an engaging experience because at the end of the day, the surprises feel a little stale. It’s the stark presentation of a familiar dinner that feels fresh.

Opening night film at this year's Sundance Film Festival, this collaboration from director Miguel Arteta and screenwriter Mike White pits the spiritual forces of Salma Hayek's Beatriz against John Lithgow's embodiment of American greed. It's been called the first "Trump-era" comedy of manners, but it's a timeless conflict. White's script dissects the body politic with a very sharp edge, bringing a violent edge to a comedy of manners format. -- Katherine Monk

No Replies to "Beatriz at Dinner results in social indigestion"