The Boss Baby demands your attention 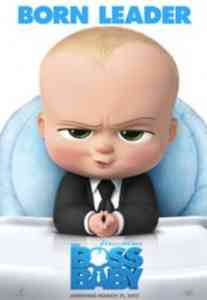 Bring it… in a sippy cup. Alec Baldwin voices the baby in a power suit

Being a baby is terrifying. It must be. Why else would babies crap their pants on a regular basis and shriek in ways that make grown men cry? Terror.

It makes sense. Not only does everything from an electrical outlet to a window blind pose a potentially lethal threat, grown-ups attempt to dictate every term of existence. It’s literally life behind bars in a one-piece jumpsuit.

Parents, of course, see it as the exact opposite. And no one could really advocate for the baby cause. But thanks to Alec Baldwin and Tom McGrath, as well as children’s book author Marla Frazee, The Boss Baby is ready to rock the cradle.

An animated piece based on the notion that all babies are entirely grown-up beings until they’re dropped down to Earth into the arms of a loving family, The Boss Baby gives birth to the idea of a higher baby intelligence, as well as a whole community of ageless babies doing office work in the clouds.

Some babies don’t get placed. They don’t fit in. So they end up in the baby steno pool, or rise to the corner office of Baby Co. The central character in Boss Baby (Alec Baldwin) has infantile dreams of absolute power. He wants to sit in the corner office, so he makes the most of his research mission to the land of aging.

At least, that’s how young Tim (Miles Christoper Bakshi) sees the arrival of his baby brother. Tim was happy being the only child, and for seven years, he had his parents’ undivided attention. The new baby has destroyed his life, and as a result, he sees him as a conniving, grown-up interloper in disguise.

To Tim, this little monster is Alec Baldwin’s 30 Rock character manipulating the world around him to get his way, which in this case, means stealing the love of puppies. It seems puppies are competing for human affection, taking away from the baby bottom line. They must be stopped, and the Boss Baby is the man to do it. He’s the alpha boss ready to crush anyone in his path. He wears a watch, a suit and does lunches — a pure reduction of grown-up codes.

If you can stay in Tim’s headspace for the duration, Boss Baby is a clever sendup of sibling rivalries, as well as grown-up distractions. Yet, the movie has a tendency to drift into full-on fantasy, taking us ever deeper into the idea of an alternate baby world.

There’s an unsettling quality to this place. It’s a factory. It’s governed by corporate rules. Babies do jobs, and not in their diaper. Granted, it may all be the imaginings of a seven-year old boy, but it’s still creepy seeing a baby in a suit and sock suspenders.

Of course, the adult world isn’t processing the same reality. Like the droning trombone voices in Peanuts, the grown-ups in The Boss Baby are entirely clued out and occupy a different plane. They see the babies as innocent and entertaining.

Director McGrath (Madagascar) finds the best comic moments when he switches back and forth between these two realities, but the movie doesn’t find enough of these.

Instead, it builds most of the comedy around the visual gags of a baby doing non-baby things. Fortunately, Alec Baldwin can sell every line. He brings the baby sage to life without digging too deeply for the gags. If it weren’t a cartoon, you could even call the performance ‘nuanced.’

There’s a certain lack of elegance in the execution that stops us from really feeling anything at all. There’s no teary catharsis. There’s only a half-hearted attempt at an ‘awwww!’ moment.

The result is a baby pool: a colourful piece of entertainment that does its job, despite being a frustratingly shallow vessel, half-filled with something lukewarm.

Alec Baldwin takes on the character of an interloping baby in this animated piece from Tom McGrath (Madagascar) and children's author Marla Frazee. Young Tim was happy being the only child until the arrival of his baby brother, who he sees as a fully-grown adult out to steal his parents' affection -- and reduce the cute factor of puppies. The movie finds its strongest comic moments in the gap between a kid's world and grown-up perception, but spends most of its time on the Boss Baby's predictable plans for domination. - Katherine Monk

No Replies to "The Boss Baby demands your attention"